So it’s just under 2 weeks since we crossed the border into country number 6, Kyrgyzstan.

Updating the blog has been tricky as we’ve been doing a lot of cycling and camping.

Neither of us knew much about this country before we arrived. Sandwiched between Kazakhstan, Uzbekistan, Tajikistan and China it has a population of just 6 million; a dwarf in comparison to its neighbours.

Our plan was to head up to the capital Bishkek where we would spend a good stretch organising our visas for the next stage and then loop back down towards Tajikistan. All in all, taking around 5 weeks.

Formerly part of the Soviet Union until independance in 1991, little Kyrgyzstan is a relatively new country.

Naturally, almost everyone speaks Russian but the Kyrgyz language remains very strong, particularly in the southern part of the country where the people are more Persian looking and Islam is practiced more widely.

We crossed the border without knowing much of this at the time. We knew no Russian or Kyrgyz words and we even forgot to exchange our Chinese currency for Kyrgysz Som at the border… We were woefully underprepared for our venture into a new country…

It’s 4pm before we reach the first border town. There’s a strong headwind and just passed the town we see our road snaking up a very stiff gradient – neither of us fancy doing much climbing today.

We stop just outside the town and contemplate where we can pitch up. A girl of around 14 rushes out of the first house shakes our hands and beckons us inside. We are fed bread, jam and tea and told we can pitch our tent in the garden. We spend the rest of the afternoon playing with the many local kids who like climbing the bike and using our tent as a den.

Before bed a dinner of fried liver, dill risotto and a kind of homemade fudge is presented to us. This is our first taste of  Kyrgyz hospitality and we feel very humbled.

The next morning we rise early and say our goodbyes to our hosts. The daughter requests we pay something towards the food. The small sum of 400 is suggested but we remind ourselves we don’t have any local currency. We readily hand over 5 USD instead which is accepted with thanks. 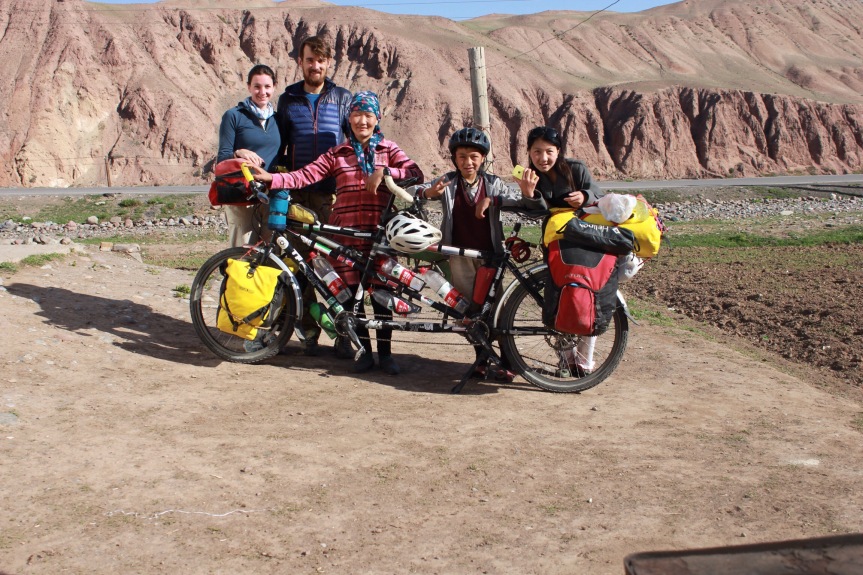 This first experience of Kyrgyz hospitality was tainted slightly after we reached the next town where we discovered that someone had stolen money from our bag during our stay in the house. It wasn’t a lot (the equivalent of around £40) but we felt sad it had happened after having had such a nice evening.

Something like this was bound to happen at least once and there was no point obsessing over who we thought might have taken it…. It was a good lesson that we should never leave our handlebar bag somewhere, even for 10 minutes in the living room of a friendly local family…

Our next destination was the town of Sary-tash roughly 75km away. From there we would cycle the remaining 175km East to the southern city of Osh where we would enjoy a well deserved rest day.

There would be some big climbs involved and we soon discover the blissfully easy gradients of Chinese roads are a thing of the past.

Russian/Kyrgyz road builders love a good gradient. There are often signs telling you how steep the next section will be, but as Paddy and I soon discovered, these hold little relation to the true gradient. The signs almost always read either 12% or 8% and we’ve now learnt that their purpose is to simply let you know a climb is coming… a REALLY steep climb!

I was convinced that we wouldn’t find scenery and countryside nicer than we saw in China but that was before I cycled in Kyrgyzstan.

The cycle between the border and Osh was spectacular, and for me personally, its some of the most rewarding and nourishing countryside we’ve camped in.

Stunning snowy mountain ranges which give way to the greenest, richest rolling hills you have ever seen. As we lose height, these, in turn, give way to sweeping meadows of long grass and hundreds of species of wild flowers.

Some fields are literally stained bright red with wild poppies while others are home to a thick tapestry of yellow, pink and blue.

and this little lark who sat close, serenading us one evening.

The vast lakes and clear streams have meant we’ve rarely had to buy water and we’ve enjoyed a shower and a sunbathe in the warm evening weather. One morning I wake to find these two toady subjects making their own camp in my shoe! I contemplate keeping them as bicycle pets while one of them permits me to hold him for a while before hopping away.

All in all its perfect camping weather!

Onto this bucolic backdrop you pass collections of traditional yurts and caravans, momentous herds of cattle, groups of men harvesting hay by hand and children racing around on their pet donkeys. 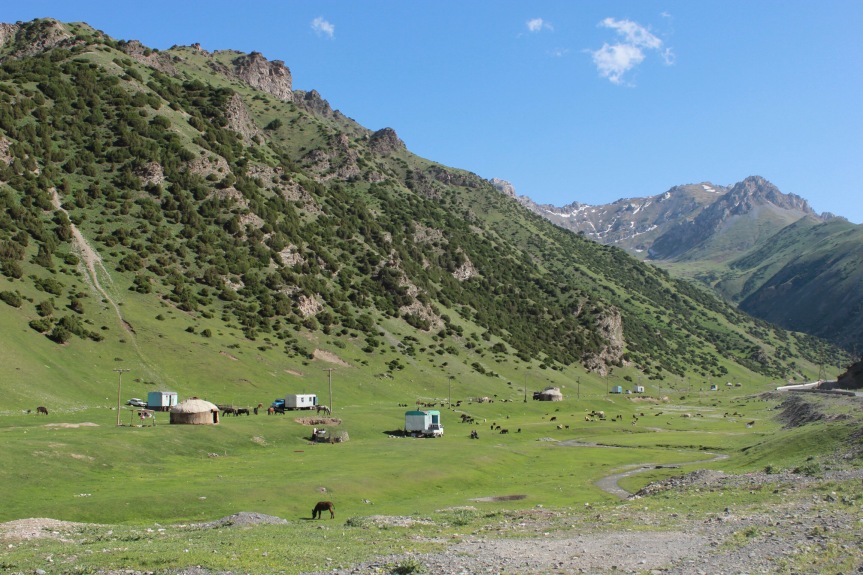 Having travelled to find new pastures for their herds, nomad families sit on large rugs in the shade of trees next to their open backed trucks which they will later unload.

While stopping for our afternoon siesta (it’s too hot to cycle between 2-4.30) this travelling family of three generations invite us over for lentil soup and tea.

Their old-school truck complete with sleeping grandmother in the back, excitable kids and practical mother figure reminded me of the Joad family in The Grapes of Wrath – the difference here of course is that they choose their travelling lifestyle.

The most important lifeline for these people are of course their horses. The Kyrgyz people are reportedly the best horesemen in the world and they have been breeding and domesticating horses here for well over 4000 years.

Kyrgyz horses are known for their speed and endurance and are also raised for their meat. They are big beasts averaging between 13.2-14.2 hands.

It’s pretty magical seeing a huge herd of these beautiful creatures cantering across a field in front of you as you sit eating your breakfast. 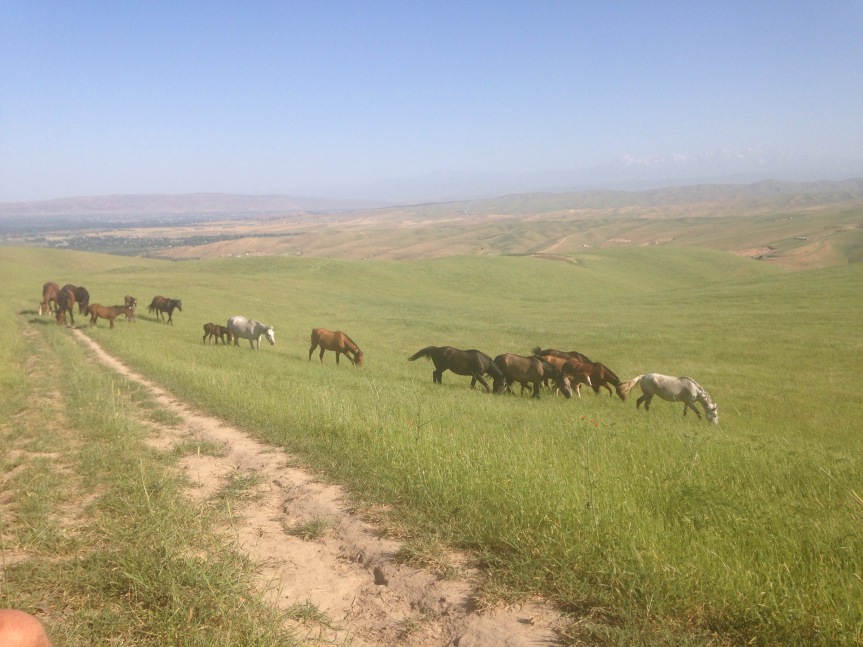 This happend so often, our cycle between the border and Osh began to feel like we were on some fantastical journey across the lands of Rohan in The Lord of the Rings…

Being here in June has meant witnessing the start of the foaling season. Not only is it nice to see these bandy legged arrivals jumping about in the sunshine, it has also meant we have been able to witness the skilful talent that is mare milking. 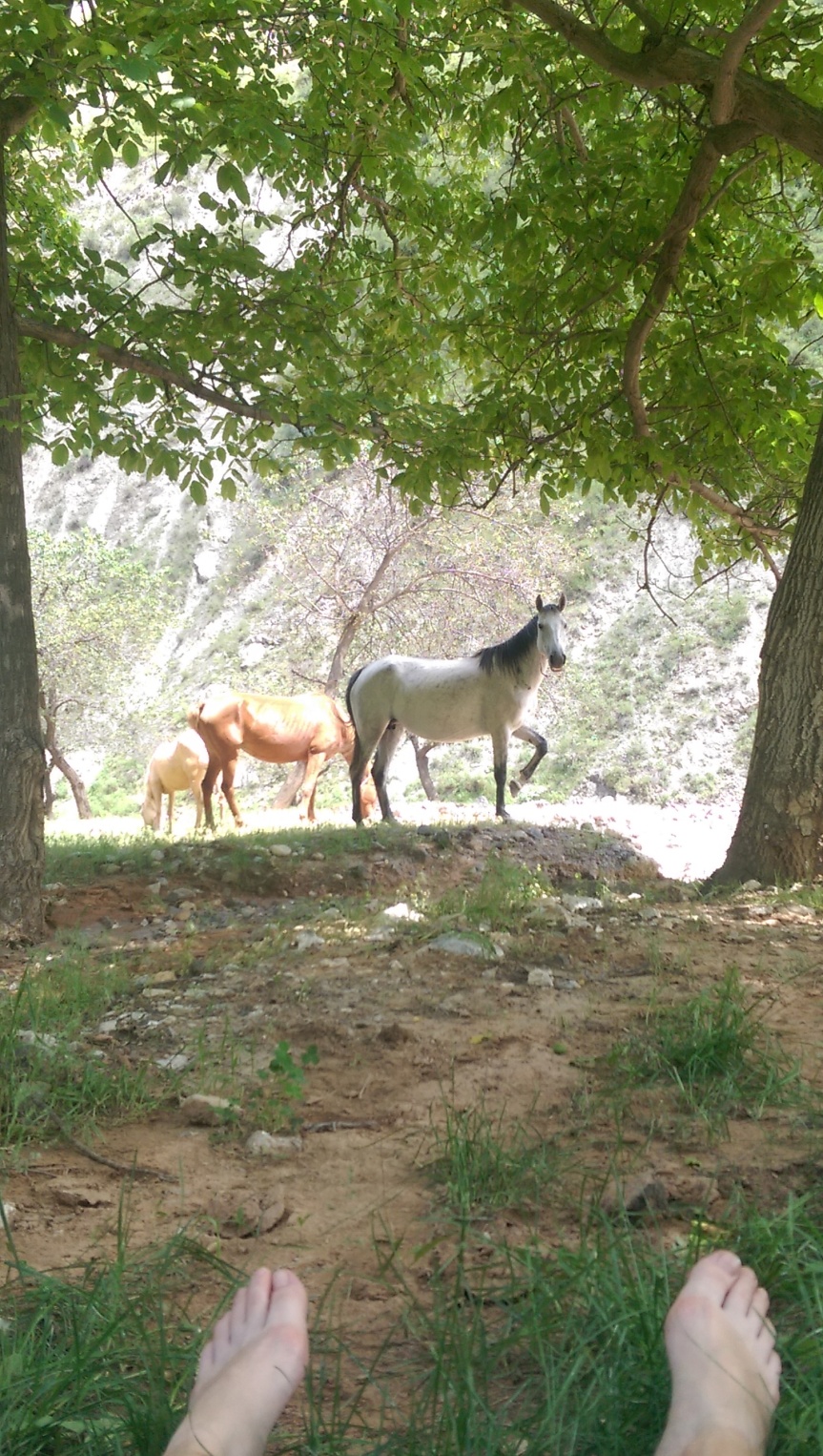 The people of Kyrgyzstan love drinking mare milk which they ferment to create a tangy, slightly alcoholic drink called Kumis. They also dry it into hard, Bon-Bon like sour snacks called kurut. Makeshift stalls are set up all along the road to sell both throughout the summer.

We were given a 2L bottle of kumis by a friendly lady who was waiting for a bus. Put it this way, it is an acquired taste and I’m not a fan!! 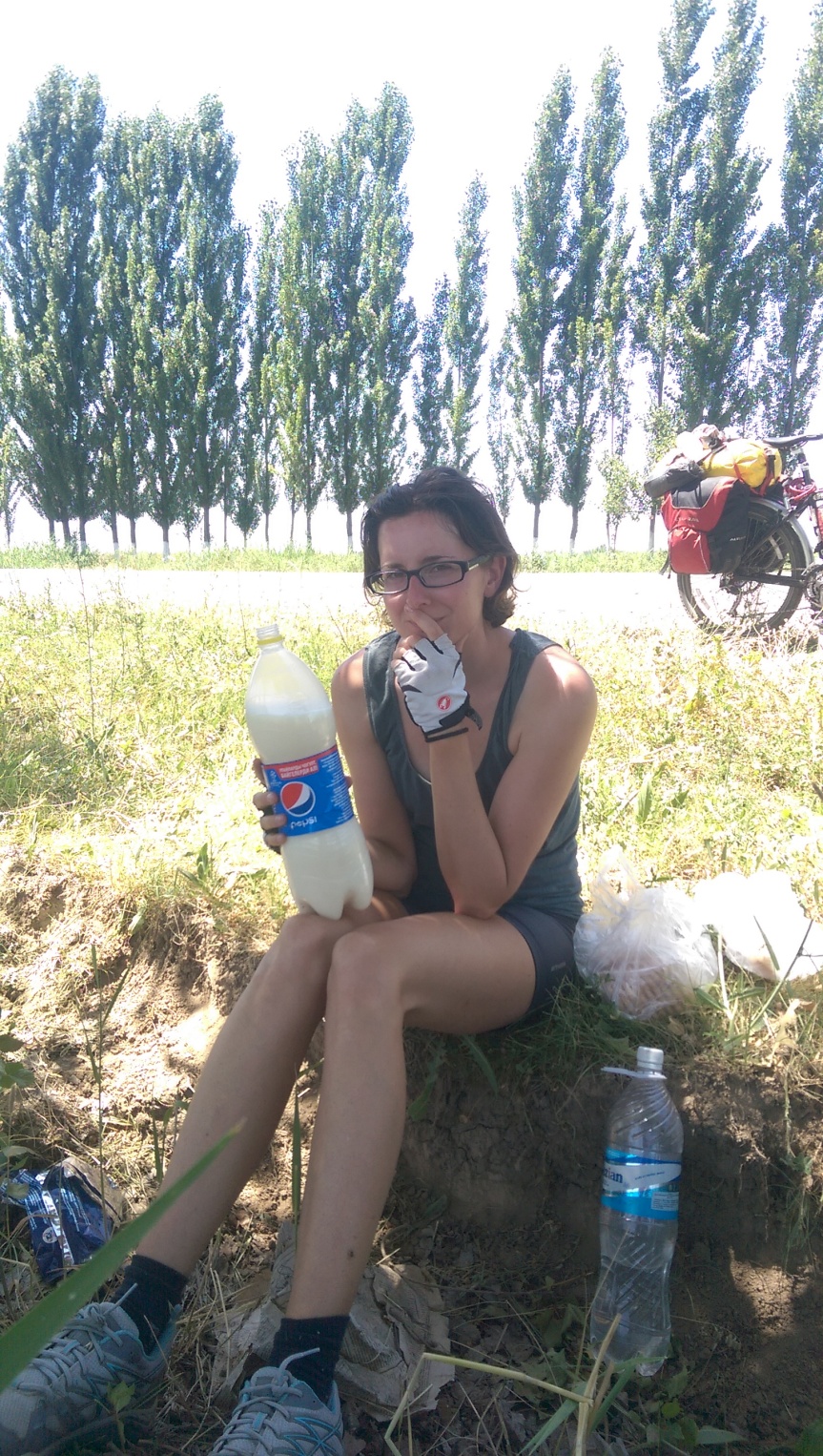 Paddy drank quite a bit that evening but this was after the bottle had been sitting in the sun all day and he had a dodgy tummy the next morning.

So our first week in Kyrgysztan has been a pastoral paradise really! 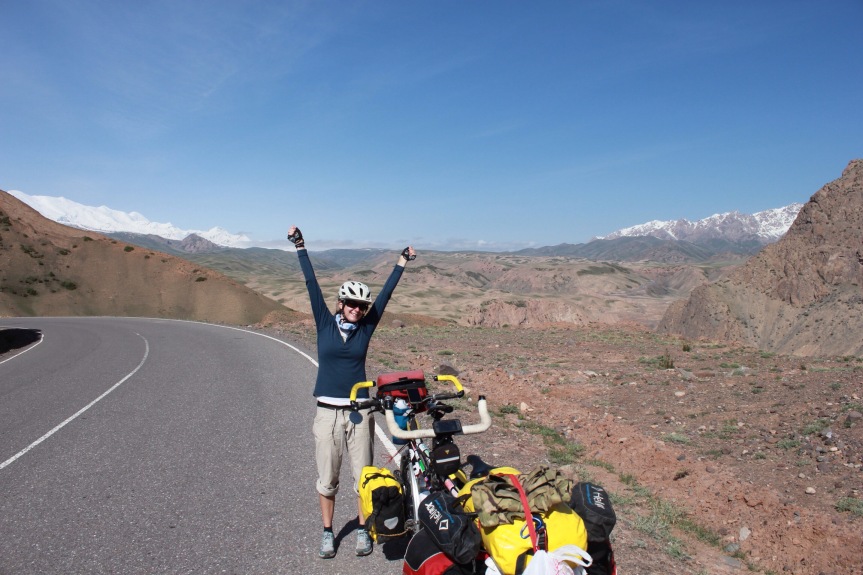 The people in Kyrgyzstan are amazingly friendly and hospitable but they also respect your personal space and privacy. They are naturally interested in you but after coming to say hello, shaking your hand and asking where you are from they leave you to get sorted, calling their children away too so you are not gawped at while trying to change out of your sweaty cycling shorts or set up camp.

This was a nice change from China, where the people are undoubtedly friendly and generous, but at times, a bit brazen! There was often a lot of staring, fiddling with the bike and routing through our bags without permission in China! You also get photographed A LOT in China (this really started to irritate Paddy after a while) but people here generally ask permission before they snap you which is a nice change.

Many men still wear the traditional Kolpok tall woollen hat which is often decorated with black or brown embroidery. Even this builder was wearing one while laying a wall in the beating sun! 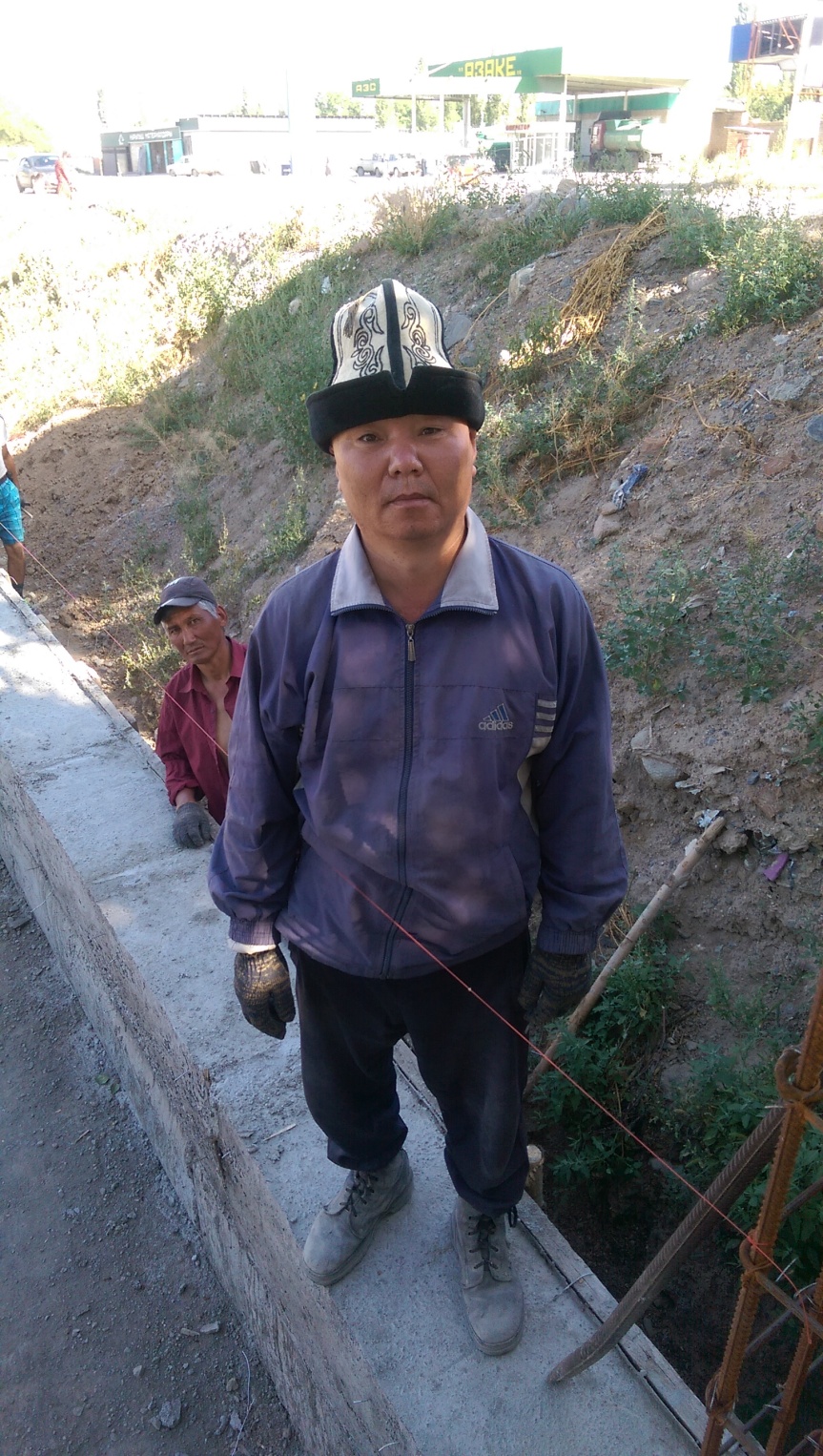 The women here are beautiful and (in the South in any case) wear tied head scarfs and love wearing elaborately embroidered clothes. It’s very common to see both sexes sporting a few gold teeth. 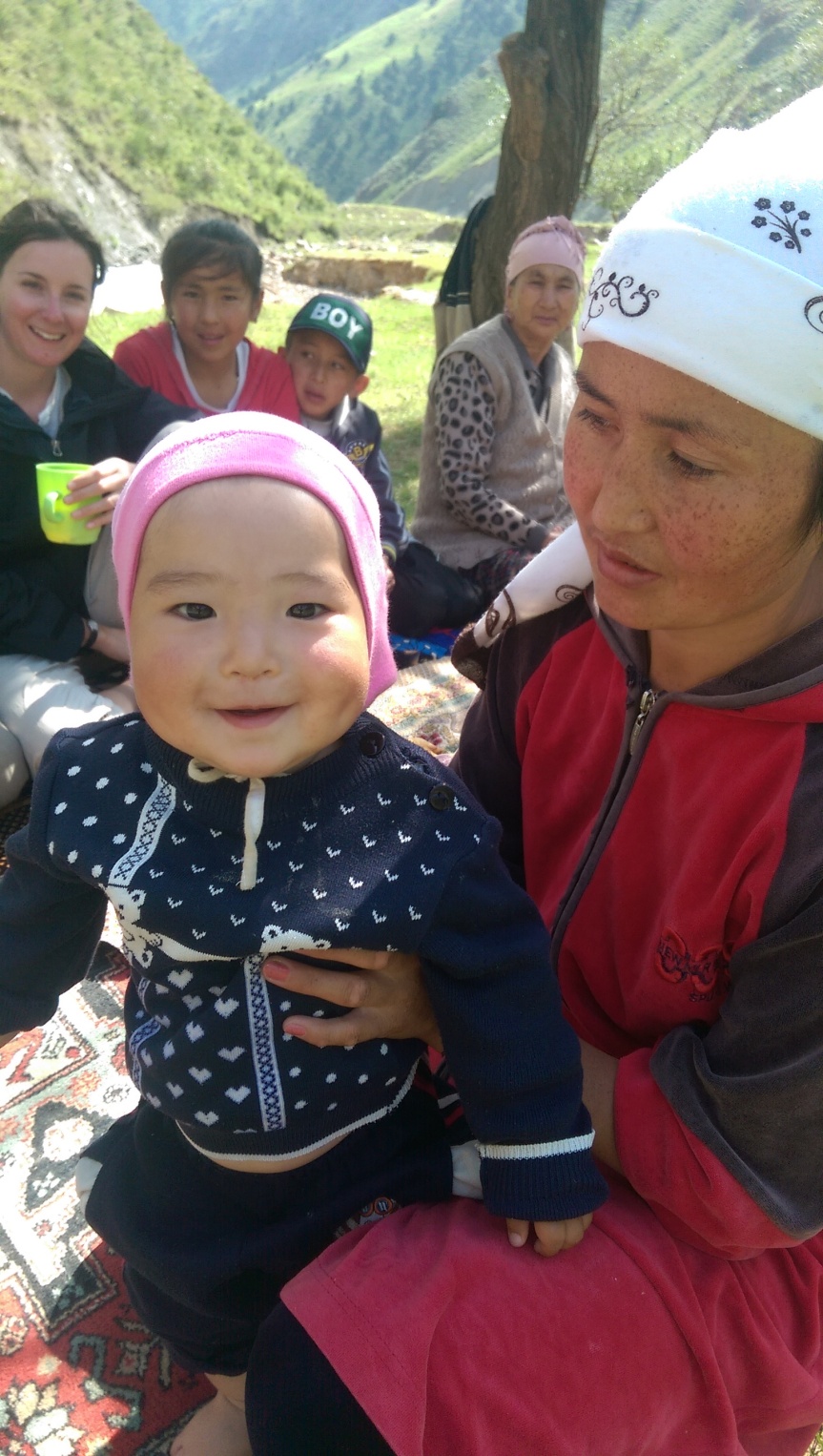 It took us 4 days to cycle to Osh. Here we will have a rest day before cycling north to Bishkek.

2 thoughts on “An Introduction to Kyrgyzstan!”