We had reached the Kwahu Plateau and all there was left to do was to climb to the top. Despite it being late in the day we knew the climb wouldn’t be too difficult and we could easily reach Kwahu Tafo town before sunset.
This stretch ended up being a really spectacular cycle with the ridge edging upwards in step formation on our left hand side and from the road we could see flat savannah landscapes suddenly giving way to sheer rock faces dropping for hundreds of metres. The road twisted around Bruku Rock Pillar Shrine which sticks up out of the landscape and is believed to home a powerful god who protects the surrounding area. As we climbed we also enjoyed some lovely views of the river too.

The plateau itself is 250km across, has a max altitude of 725m and offered a welcome change from the relatively flat Aftan plains. We ended up staying in the hotel which the local Chief owns. There had obviously been a significant royal death celebration as the whole place was decorated with the funeral colours red and black. A local gent called Winston befriended us as we headed out for food and accompanied us around the town as we chatted about what it was like to live in Ghana. We enjoyed a delicious dinner of fufu which was very spicy and then fell into bed. 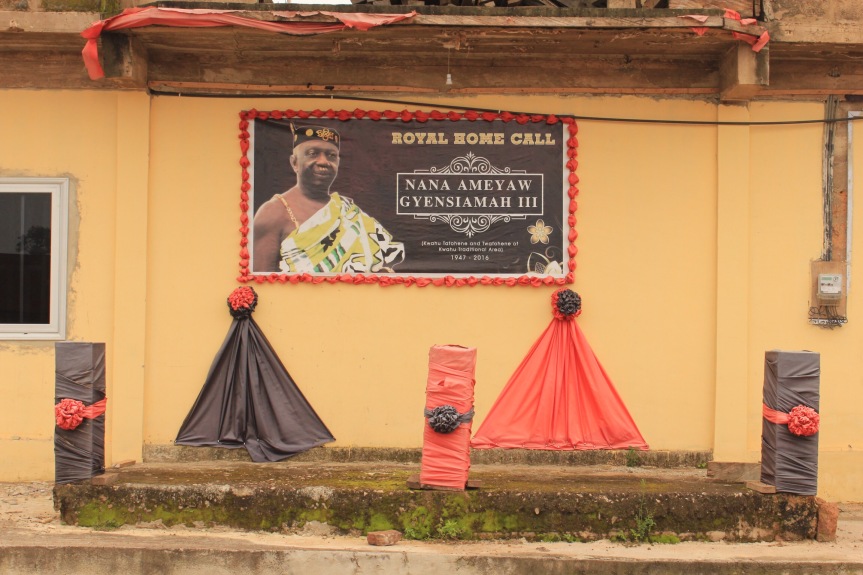 We woke to an extremely misty morning which obviously had no intention of lifting. This was a real shame as we had plans to visit a canopy walkway in Odo. By the time we reached the town the mist had slightly lifted and over a second breakfast we decided to go for it. The experience was well worth it even though we couldn’t see a huge amount. Just watching each other walk the route was comedy gold. According to the guidebook, the wooden walkways have been built to European safety standards but we can only presume the writer hasn’t lived in Europe for a good 25 years. As well as loose screws and rotting wood the mist had made the whole thing a slippery nightmare and we regularly found ourselves clinging onto the sides for support. 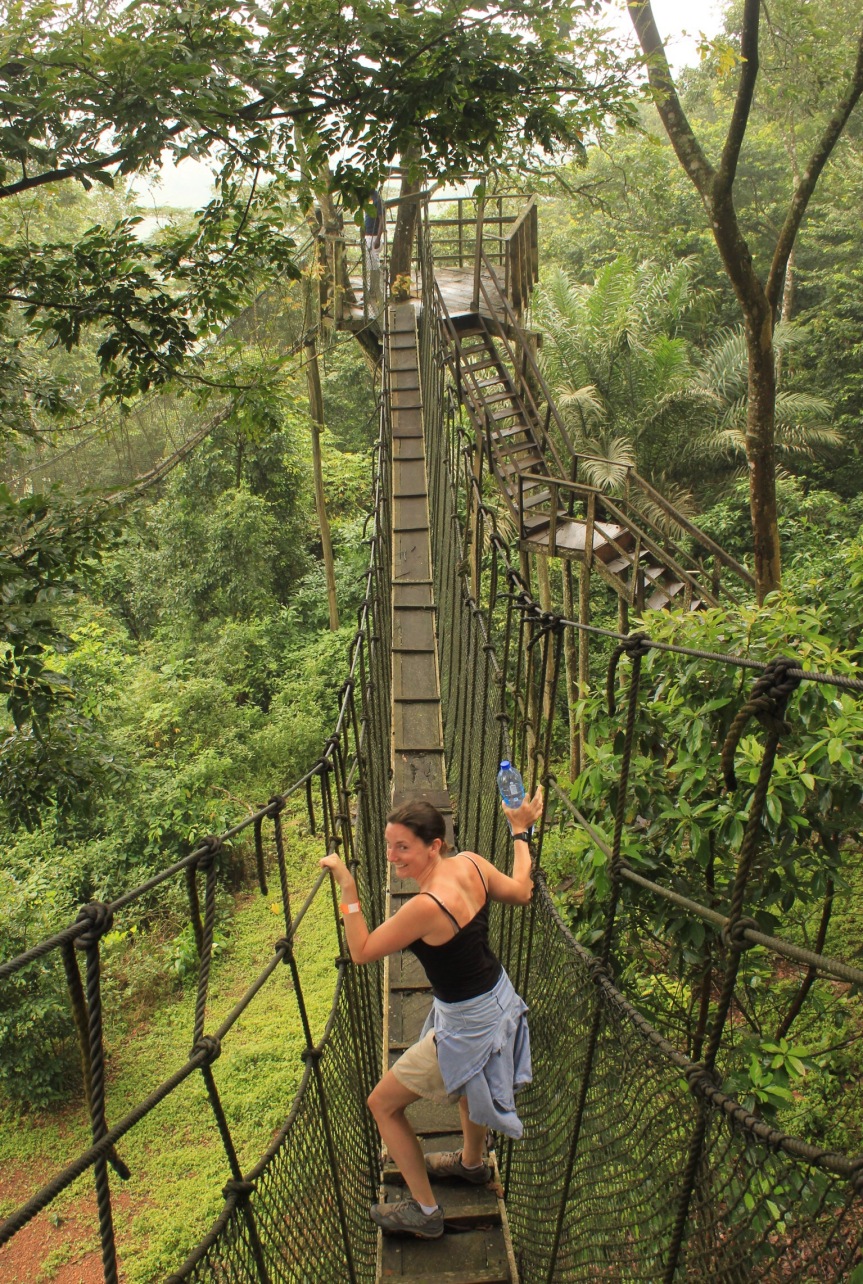 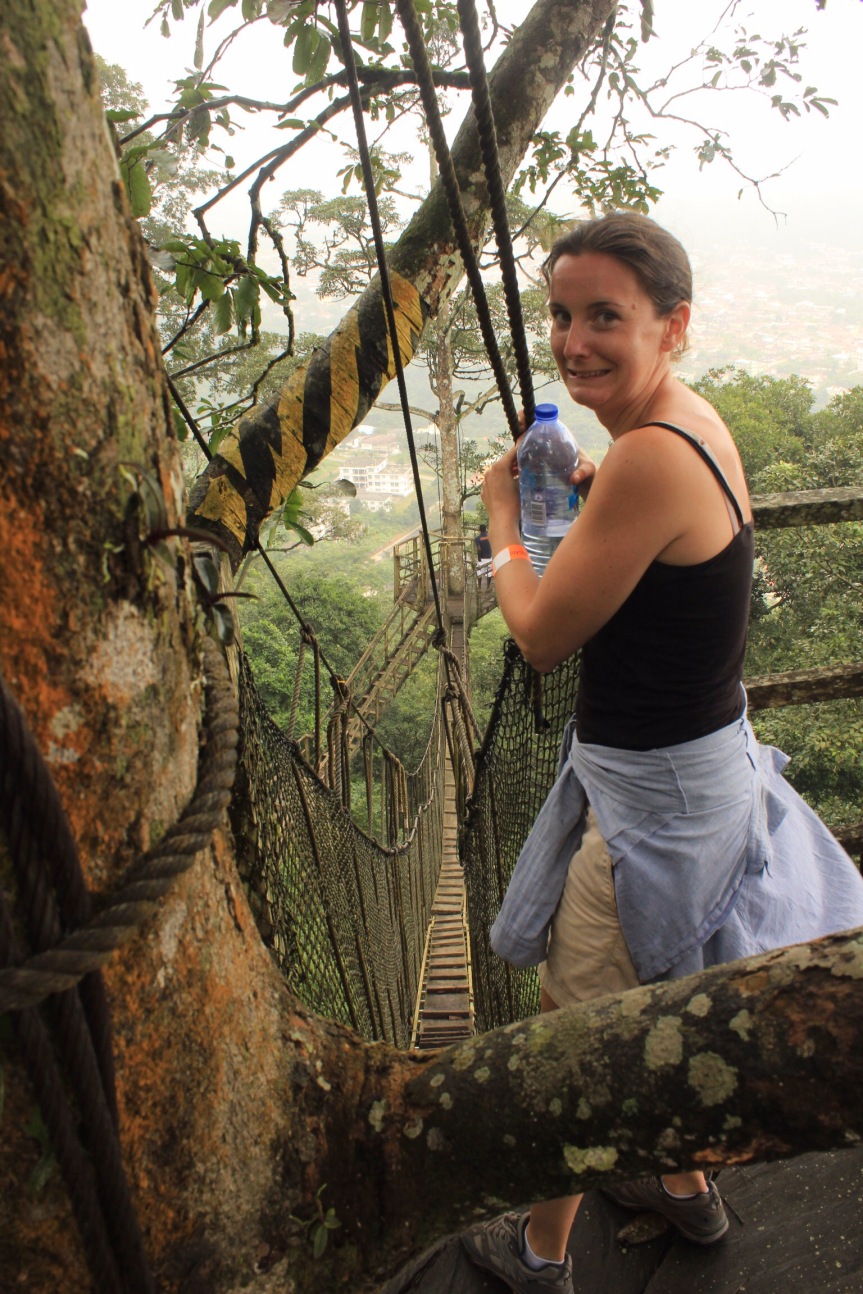 Relieved when we reached the bottom again we jumped back on the bike and enjoyed the long stretch of down through a rich forest to reach the bustling major town of Nkawkaw – here we were finally able to get more cash – a big relief as we had about £4 left! Nkawkaw is a lovely town with the end of the ridge suddenly dropping to create a giant wall around the town on one side.

From here we needed to pick up a local tro tro heading west so we could reach our planned destination – Bobiri butterfly sanctuary – that evening. A nice Policeman helped us call down a van and with no hassle the bike (verticals style!) and the bags are tied onto the back and off we go. The tro tro takes us a good 80km down the N6 towards Kumasi where we get dropped off in Kubese. The sanctuary is well signposted and although a bit slippery in places with mud we reach the heart of the reserve in 30 minutes. True to it’s name we see a lot of butterflies even though it’s not really the season for them. The guesthouse sits in a clearing surrounded by beautiful blooming shrubs, roses and flowers. Beyond, the thick forest branches out in every direction. It’s idyllic and for £8 a night and the only guests there we feel we have really lucked out. Founded in 1942 by the British, the butterfly sanctuary has been managing this local area of forest ever since. Remnants of the old British style architecture can be found in the wooden library house and adjoining terrace (sun downers anyone?!). Here we cook and eat dinner browsing the ecology books from the shelves. We sleep very well and enjoy following ‘The Three Sisters’ trail the next day through the forest before jumping back on the bike and cycling back along the track.

We now had a day to explore some Ashanti culture before our long public transport haul to get north to Mole National Park the next day. The Ashanti originally migrated from the north and settled in central Ghana many centuries ago. They conquered a lot of land and integrated many tribes into their fold over the course of the years. Six states were joined together to make a confederacy in the 17th century under the first Asantehene who ruled under the ‘Golden Stool’. (Chiefs are elected by a group of elders and can be de-stooled if they prove not to be incapable of the position.) More wars and conquering followed with the zenith if the fighting taking place against the British.

First up were a couple of 19th century fetish shrine houses. Both with an internal courtyard and four stages on the surrounding walls for observers, musicians, singers and the preparing of special meals, these buildings were where the community would carry out rituals so as to communicate (indirectly) with Nyame, their supreme God. The communication was done via a number of lesser gods known as abosom. Elements of these lesser gods such as water and clay from a sacred river and certain herbs or plants would be collected and mashed together in a pan. The special priest/mediator known as the Obsomfo would then perform certain abisa (ceremonies) which may include certain sacrifices and often involved dances known as akom which were accompanied by skilled musicians and singers. These rituals would allow the Obsomfo to offer advice to petitioners or look into the future. These priests were the Chief’s special advisors and right hand man.


After the shrines, the afternoon was then spent visiting some Kente cloth production villages. Of all the crafts associated with Ghana, Kente weaving is probably the most recognisable – the intricately woven and richly colourful geometric designs are hard to miss!

Woven into long strips, each design has a meaning behind it – these strips are then combined to create unique cloths with their own symbology. Special designs are used for certain ceremonies or people. When Obama visited Ghana a unique Kente creation was created for him representing his character, politics and ethos from many different traditional strips. The company we visited said they were debating whether to create one for Trump when he visits! Originally Kente was reserved for Chiefs and immediate family and it can come in both silk and cotton. After the tour, naturally we bought one which took a while to choose but we ended up going for this creation which apparently means ‘Learning to respect differences and be together as one’ as it is created using 12 individual strips which represent things like ‘the road is long and hard’ and ‘step by step’.

We spend a bit too long in the cloth shop and are then caught out by a rainstorm but we do finally manage to meet up with the main north to south road ready for the public transport adventure the next day.