7 families who took us in 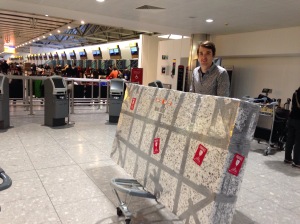 Just under 12 months ago we were dropped off at Heathrow Airport with six panniers and a styrofoam box containing a tandem. We were headed for Vietnam. This week we officially crossed into mainland Europe and cycled to our intended destination; the boat Encore in Lavrio near Athens. 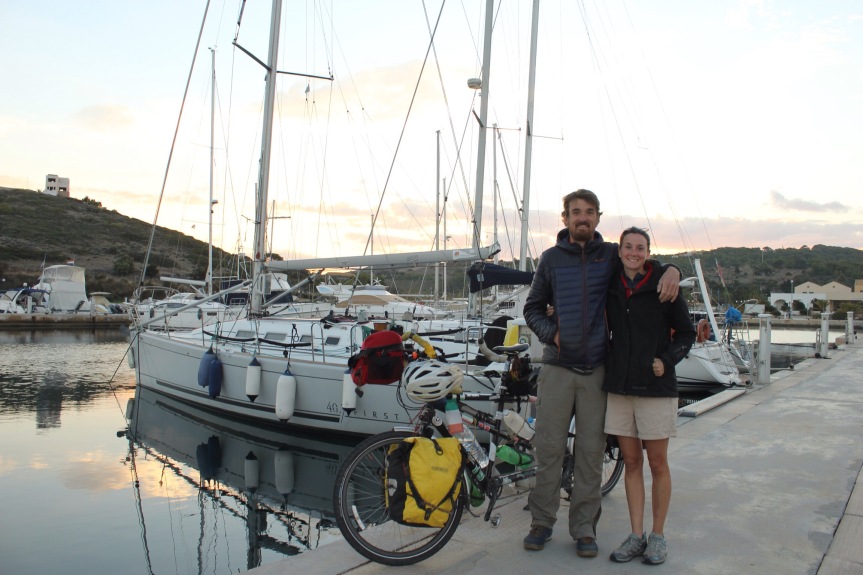 It’s been pretty great cycling across 13 countries with Paddy long legs… We have climbed 6 peaks over 4000m and 1 over 5000m. Cycled across deserts and through snow blizzards, along mountain ranges and sea coasts. We have slept in our tent 122 times, worn our way through 5 tyres, fixed 25 punctures and replaced 2 spokes. We’ve hitched lifts on cars, trucks, trains, canoes and motorcycles, and cycled nearly 13,400km.

The journey isn’t over but we’re looking forward to coming back to the UK for a month. This is us signing off from the blog for a while. Thanks for following and we wish you a very merry Christmas. We’ll be back writing again in 2017!

Love from the two Londoners and one bike

Here are some of our favourite bits of 2016:

Days stopped due to illness or injury: 0

We spent a nice day food shopping, eating and relaxing on the beach front in Fethiye with Kathy and Nigel who are both keen cycle tourers too. Before he met Kathy, Nigel had been cycling for 6 years and has been everywhere including all over Europe and South America, a long tour following the full length of the Mississippi River and the famous Cairo to Cape Town tour. Needless to say we had lots to talk about and it was good to hear about their next trip which will see them team up to cycle around New Zealand.

In the morning we visited a local bike shop and made the unusually (for us) snap decision to have a new Shimano cassette and chain fitted to the bike. Initially everything appeared to be working well despite the fact that the shop hadn’t also been able to replace the front cogs. We cycled around Fethiye peer without a problem but as soon as we tackle a hill the new chain now starts to jump off the smallest front cog… It turns out that all the advice is right – once you need to replace the cassette, everything needs to be changed because it all wears together. After some researching on the net by Paddy, we also discover that the cassette we’ve been sold isn’t quite the quality we’d hoped for. Knowing that we had a good few climbs to tackle before getting to Bodrum we decided we were better off going back to the bike shop and having our old chain and cassette put back on – we had come this far with it and had developed some pretty good tactics to prevent it jumping in the easiest gear! We half hoped that the shop might give us a refund for the new parts in light that we had only cycled 3km on them… Unsurprisingly, the shop wouldn’t take the new parts back and so we were kicking ourselves slightly for not doing our homework before buying.

Anyway, these things are all trial and error and we now know for next time! Back on track we start to cycle out of Fethiye when the car in front of us suddenly turns right into a parking bay without any warning or indicating. We are forced to swerve quickly to the right to avoid crashing and start to skid on the wet ground. We both go over, Paddy taking the brunt of the fall. Things escalate and we end up having crossed words with the passenger in the car who was this big mouthy Turkish women. She claimed that we should have been in the cycle lane and this was Turkey not the UK so driving habits were different. This annoyed us because the whole thing was clearly the drivers’ fault.

Anyway, after brushing off most of the dirt we finally get going properly. Bodrum is 240km away which we hoped to complete in 3 and a half days. Despite being delayed first in the bike shop and then on the road we still hoped to get to Koycegiz Lake 77km away.
The day was spent on the main road; not unpleasant but not particularly scenic either. Koycegiz is really beautiful and the Lakeside park offers great camping facilities for 20 Lira a night so it was a great place to stop for the night.

Onwards the next day and we reach our turn off at Akyaka which will see us leave the main road and take us along the Bodrum peninsula for the next two days. It was really great to be off the main road and we stop at a very swanky harbour for lunch before spending the afternoon cycling along some beautiful small roads with gorgeous coastline to our left. 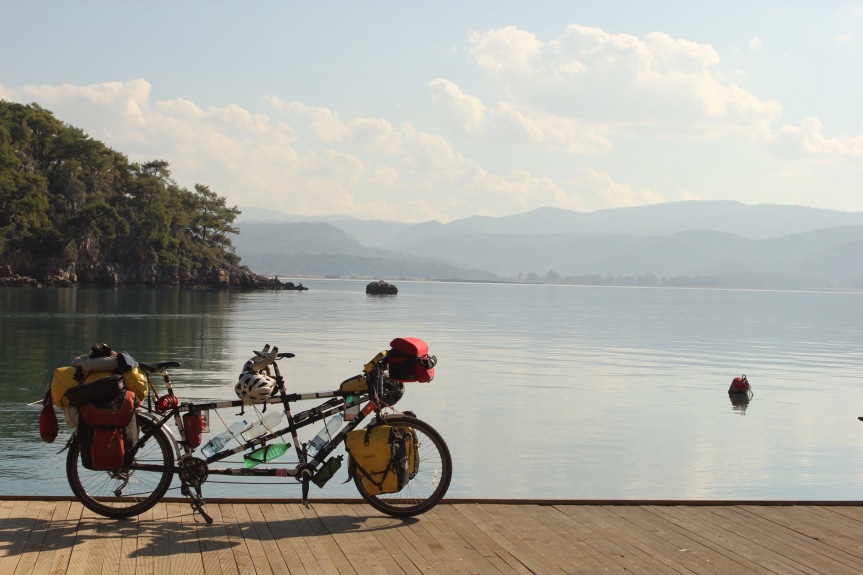 We reached the small cove of Akbuk and manage to find a local guy to open his little shop so we can stock up on a few things before camping on the beach.

We had two days to reach Bodrum from here before catching the 9:30am ferry to Kos on the 9th of December. It was only 88km but there were two big 500m climbs between us and the town. We spent most of the day getting over these. This would be our last major climb of 2016!!

﻿
It was a beautiful cycle up through pine forests and mountains and we enjoyed winding our way up through the small sleepy villages despite it being pretty tough in places! We stop to buy some hand pressed olive oil from this lovely chap who was also selling his own honey, olives and balsamic vinegar outside his house. I wish you could all smell the oil – it’s divine – and we buy a litre. A little taste of Turkey to last us through our time on the boat in Greece. 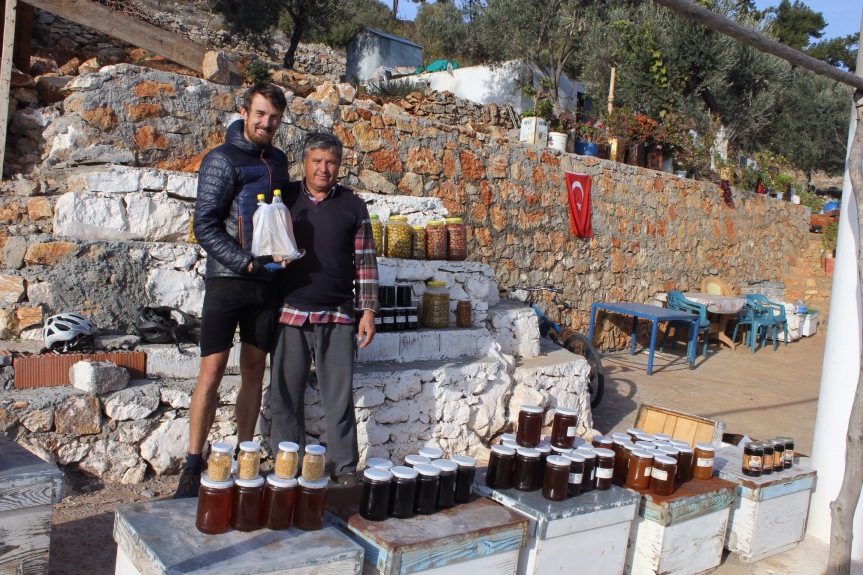 We dropped down to camp on a beach just around the headland from Bodrum itself. The next day would see us complete the final 16km to the town, and find the campsite situated in the western part. Suddenly it was our last night in Turkey so naturally we enjoyed a few beers overlooking the marina. Tomorrow we catch the ferry to Kos where we can then get the long ferry to Athens. 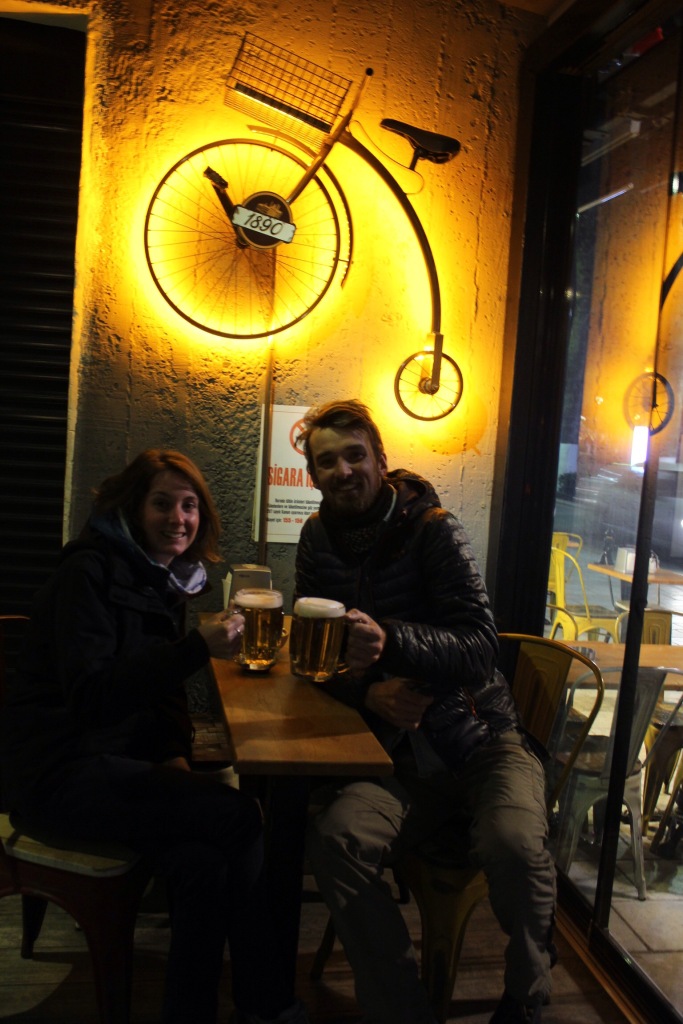