We had a lovely rest of the cycle from Anddo to meet back up with the road, passing through many villages along the way. We have both commented on how nice it is to be back on the bike and we are enjoying the continuous eating – chomping on fried plantain chips and the delicious fruit and baked goods from the many stands we pass. The mangos here are to die for and the pineapple which is much whiter than the stuff you get at home tastes almost like a different fruit here. Naturally the bike is getting a fair amount of attention and we are regularly greeted with a loud ‘Ayyyyy!’. (If anyone has watched Happy Days it’s exactly like The Fonze’s exclaim when he sees something unusual.) we are getting a lot of stares but as soon as we wave or smile we get a merry wave back and a call of ‘You’re Welcome’.

Another pleasant surprise has been the noticeable lack of dogs – something I have been very happy about as it normally falls to me to be first line of defence when they begin to give chase. Most people speak at least some words of English and the majority of people we have spoken to are fluent. This means we can really communicate well, ask lots of questions and minimise misunderstandings which has been really nice. So all things considered, so far, Ghana is turning out to be a very relaxed country to cycle in!

We have discovered the rainy season here isn’t equivalent to the monsoon season in parts of Asia and we really have had barely any rain at all. Showers tend to be sharp and short at around lunch time or at night so we have largely been able to shelter from them. It is very humid however and we have had to be careful of the mozzies after dark. The rains have meant that everything is very green and luscious and we have enjoyed seeing some of the amazing flowers many of which look like weird alien beings.

Despite the unpaved roads and rolling landscape we made really good headway and by 10am had decided to set ourselves the ambitious task of getting to the highest town in Ghana that evening – still a good 55km with the last 12km being a very serious 6% climb. Now that we had a feel for the smaller roads we again carved out a rural route which avoided the large town of Ho. We eat lunch at a large junction and have an opportunity to sample our first taste of cassava which is a root based plant used extensively across Ghana to make a sticky dough. It is pummelled a lot using long bamboo sticks until you get the right consistency. 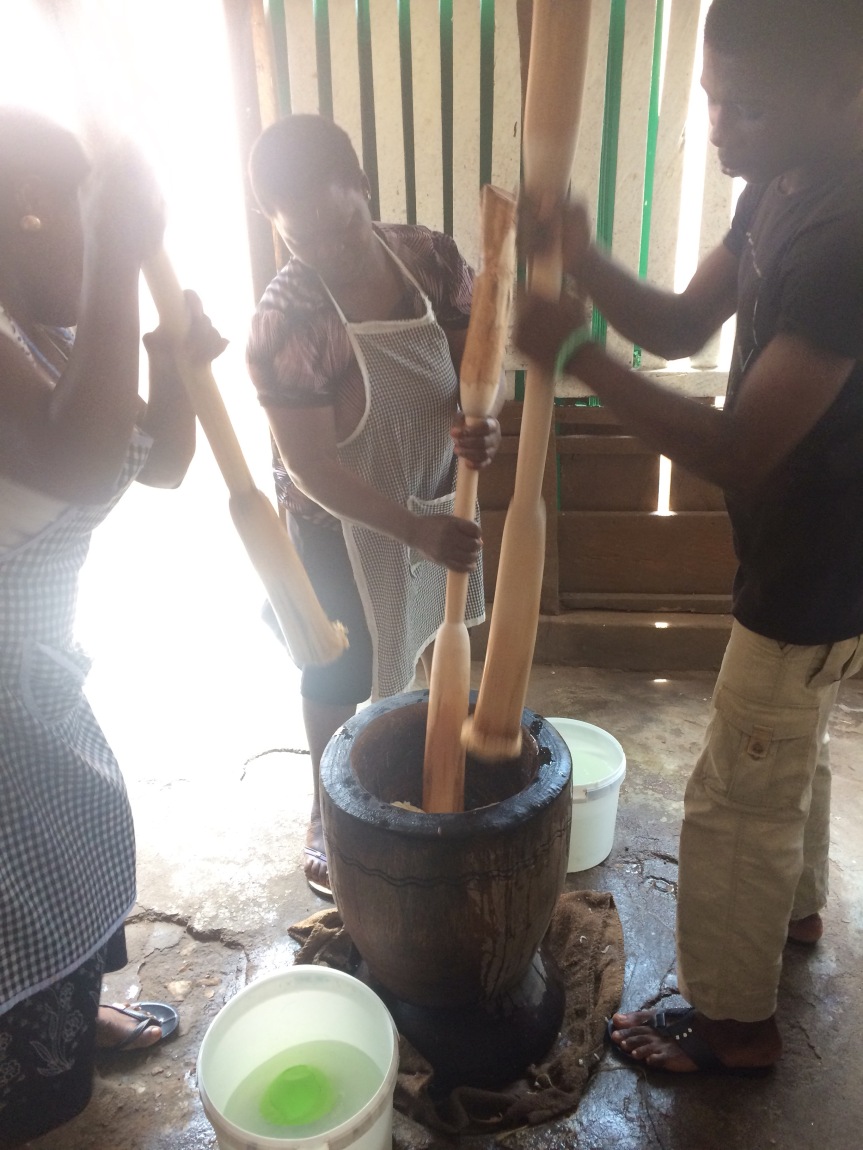 Fufu and Banku seem the most popular dishes so we ordered one of each. They are both soup based – a large slab of cassava dough is placed in your bowl and a rich meat, spicey broth is poured in with some meat pieces added to the side. Eaten with your right hand (you get told off for using your left!) you use your index and middle fingers to snip pieces of the dough off and you can slurp the liquid from the bowl as you go. It’s a weird sensation eating with your hand at first but you soon get used to it and a handy jug of water and a bowl is placed on the table for you. We both agreed that fufu was a better option – banku dough has a tangy, sourness to it which we both found hard to like.

By 4.30pm we had done a major part of the climb and were turning onto the road leading up to the highest town in Ghana – Amadzofe. The mountain was completely shrouded in mist and we were soon totally engulfed in it as we made slow (but steady) progress up the track. With jungle on either side and the mist and darkness pressing in on us it was quite a surreal hour of cycling. Slowly we see some street lights appear through the gloom. We have 500m to go to the guesthouse when there is a huge clap of thunder and the heavens open. I have never seen rain like it! We have difficulty finding the guesthouse and get completely drenched in search of it. Thankfully we have credit on our local sim to call the guy who is able to give us directions. All we could think was thank goodness we weren’t still climbing! We finally stagger in from the storm looking like drowned rats to discover all the power is off but greeted by a friendly lady who shows us our room and a kitchen we can cook in. The power returns after a while and within an hour we are both showered, clothes washed and cooking veg curry with a beer in hand listening to the storm raging outside. = happy Annie and Paddy!

The next day we planned to rest and explore Amadzofe. We wake to discover the storm is over and that the view from the guesthouse offer an incredible outlookut across the mountains. Once the mist has cleared we can even make out lake Volta in the distance! After breakfast a guide takes us down to the local waterfall which involved a slippery scramble down through the forest with the aid of a rope. We then climb the mountain peak – Mount Gemi – on the other side of the village which boasts great panoramic views across the mountains. The afternoon is spent stocking up our supplies in the local market and planning our route, which we hadn’t really considered until now.


The next morning we got going early as we needed to cover 40km and get to Kpandu where we hoped we could get a boat across lake Volta so we could start heading west again. While eating our breakfast we spot two toucans perching on the tree ahead while two vultures sour overhead.

We decided to take the longer but main route out of Amadzofe which was a good idea I think as we had an excellent paved surface for most of the cycle. It’s Sunday and we pass a lot of church services with live music making. Everyone is in their Sunday best and some of the outfits are really beautiful. We reached the lake by 10.30 and are told we could wait four hours for the two hour ferry crossing or pay 150 cedi (£24) for a private boat immediately which would take about 30 minutes. Even though we already felt a million miles away from our jobs back home we reminded ourselves that we were not on our £25 per day budget anymore so we opted for the private boat. 🙂

We got very wet on the crossing over but as promised, half an hour later we were pushing the bike up the beach on the other side. We now had a 100km cycle across the Afram Plains to reach Ekye-Amanfrom where we could take another river ferry crossing to reach the Kumeau Plateau east of Kumasi. According to our guidebook, the Afram Plains are one of the most unvisited areas of Ghana by tourists and there wasn’t much info about the route. There’s not much to see here in terms of ‘sites’ and we didn’t plan to stop much along the way but we were looking forward to cycling this part of the country. The plains were once an important area for Cocoa plantations but since the damming of lake Volta, which consequently affected the local climate, the crops failed leaving the people here with very few other economy driving alternatives.

We stop at the bustling town of Dolkonogram where we feast on a delicious take out of rice and chicken. A rain storm rolls in while we’re eating so we sit it out for 40 minutes before getting on the road again. We stop over at another village that night and again ask the Chief if we can camp nearby. Again, the villagers are very generous and accommodating and offer us a spare room in the old Chief’s house to sleep (although we end up sleeping outside as the room is stiflingly warm). The next morning we hit paved road for a good 20km and easily reached the ferry by 12 noon. We see a lot of wildlife including a big dead snake on the road and a HUGE black scorpion crossing our path! We have a bit of a wait at the ferry where Paddy replaces our worn out gear cables.