We had a couple of days rest in Osh where there isn’t much to see. It was very hot and we mainly spent our time hanging out in the hostel researching all the visa requirements and planning our route. 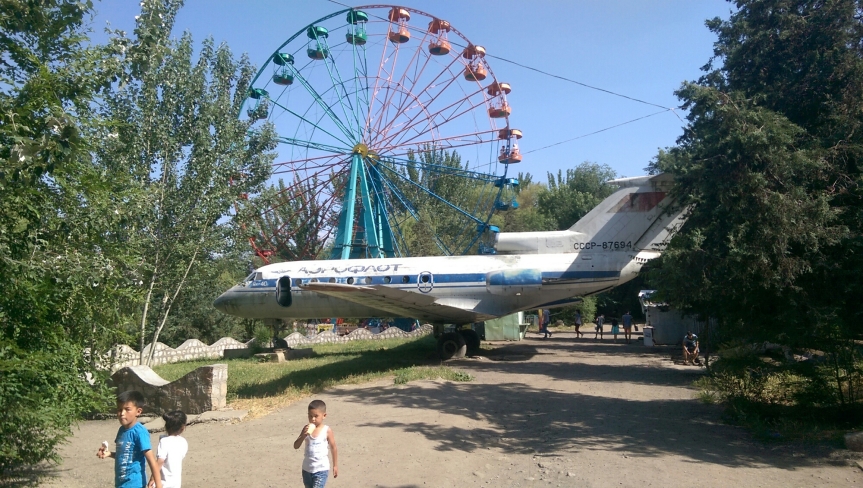 We also treated ourselves to some meals out and found a bar/restaurant we both liked.

It has to be said, the food in Kyrgyzstan isn’t what you would call michelin star! Unlike China, where almost everything we ordered was mouth-wateringly delicious despite the menu being almost incomprehensible, all the dishes we have tried here have tasted and looked more or less identical.

Firstly, dill features heavily in EVERY dish. You can’t avoid it, whether you’re after a quick pastry snack or a horse kebab, it’s mixed, sprinkled and garnished on everything! 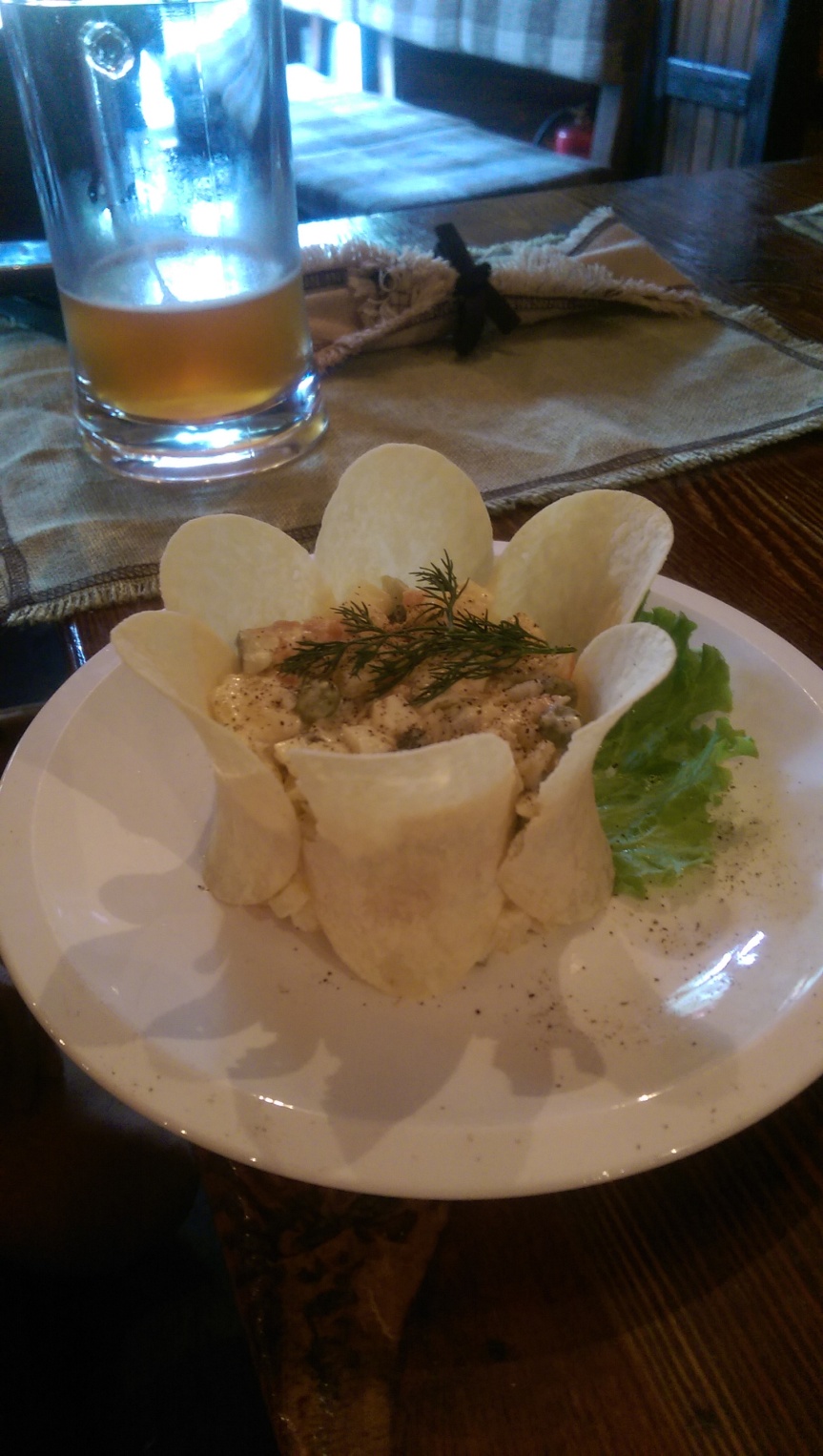 It’s not uncommon for your plate to include four types of carbohydrates – although this is great for us cyclists – and it’s very hard to find a dish that doesn’t contain meat. In one restaurant, we noticed that the vegetarian pizza was considered vegetarian because it only had one type of meat on it – sausage!

Three things Kyrgyzstan does well are meat, bread and beer. It’s the first time pretty much we have been able to buy fresh milk and butter too, something we both missed in lactose intolerant Asia.

Naans fresh out of a road side clay oven are delicious and whatever meat you order it’s always juicy and tender. Draft beer is common but you have to watch for the alcoholic content, we absentmindedly drank 4 pints of 11% one evening. My beer always comes with a straw… 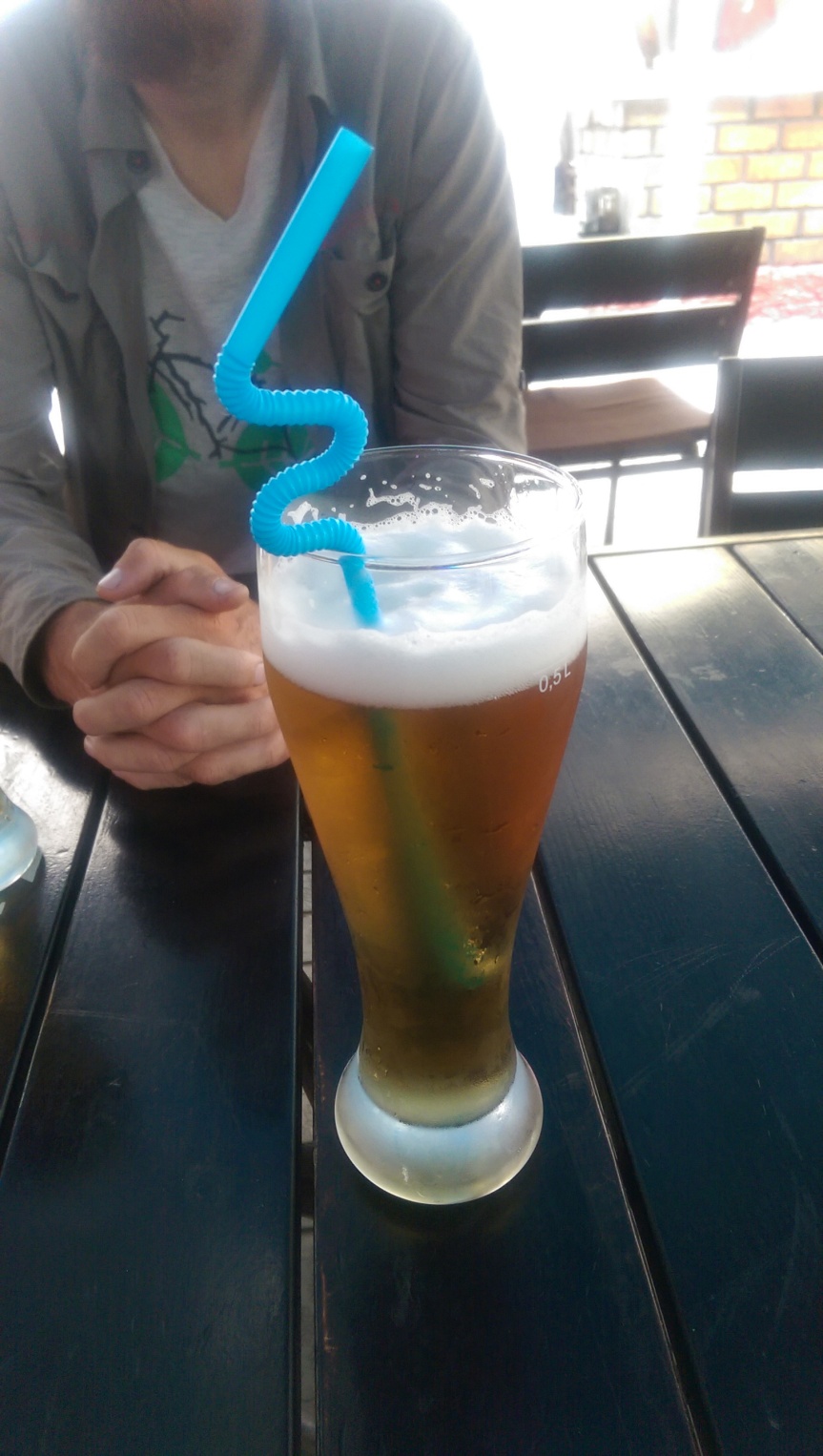 We’ve naturally eaten a lot of horse which is very rich but delicious!

Food ranges from very cheap to average. Kyrgyzstan currency is the com (som) and it’s the first currency where we have used a 3 piece coin! 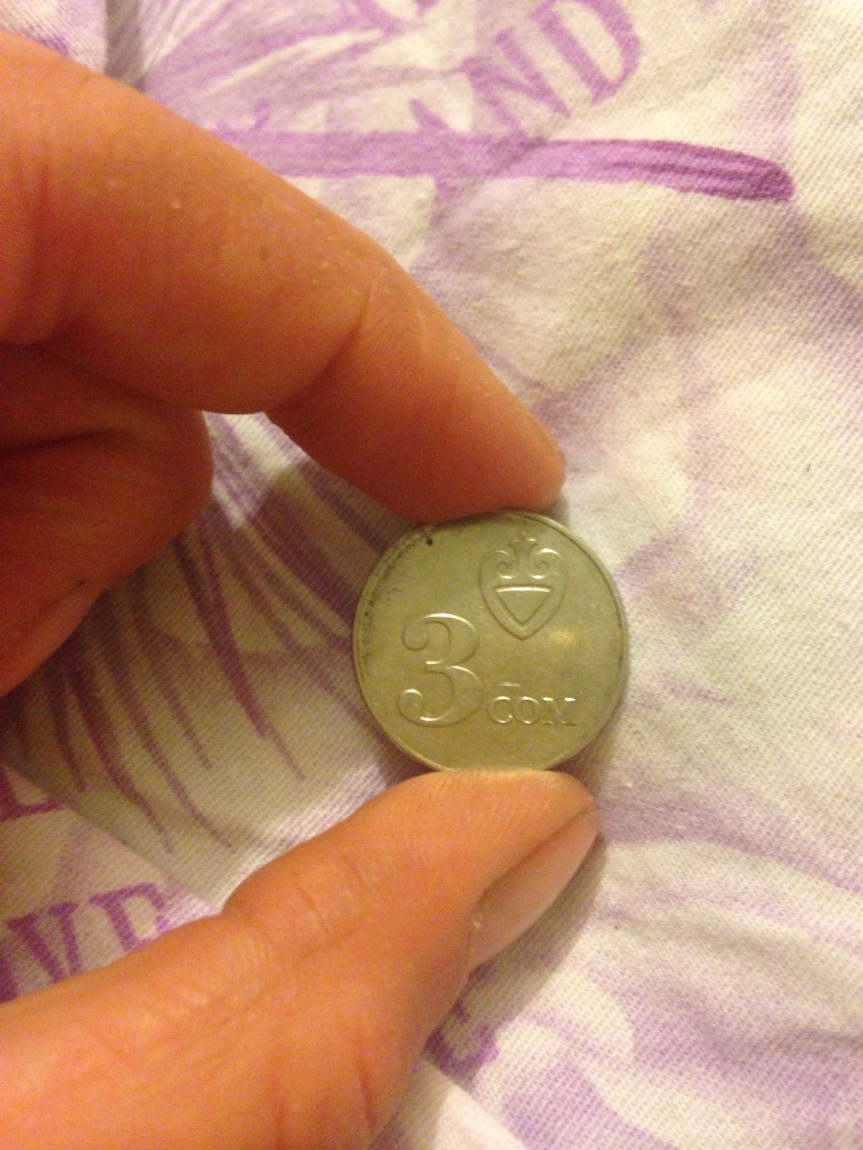 After our rest days in Osh we pushed onwards north to Bishkek. 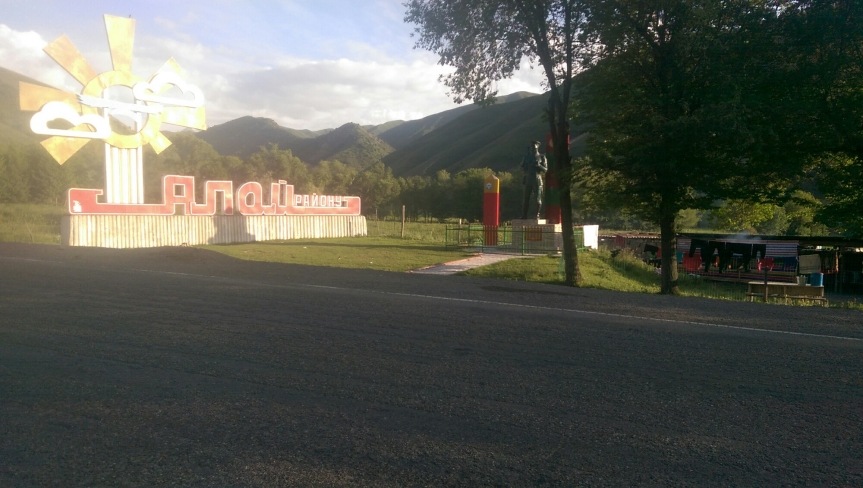 We would be following the main highway the M41, all the way.
Despite its name, the Kyrgyzstan M41 bares no relation to the M41 motorway in the UK. It’s more like a potted A road where you often have to navigate your way through large herds of sheep, horses and cattle.

It can get fairly busy with traffic but we were avoiding a lot of this by waking up very early, siestering in the afternoon and cycling late into the evening. Kyrgyzstan drivers are some of the worst we have encountered – they get very close and they drive fast but a lot of the time the road was pretty quiet.

Again we did a lot of wild camping.


Some of the cycle was very beautiful, particularly the stretch following the river which is dammed the whole way along ending in the huge Toktogul reservoir. 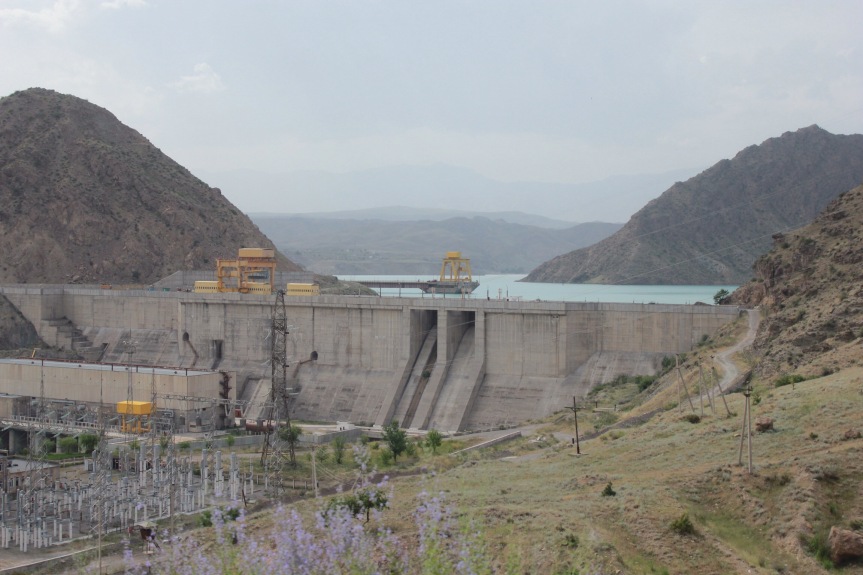 Whatever you think about hydroelectric dams and their affect on the local environment, they can create some pretty spectacular lake views further up stream!! 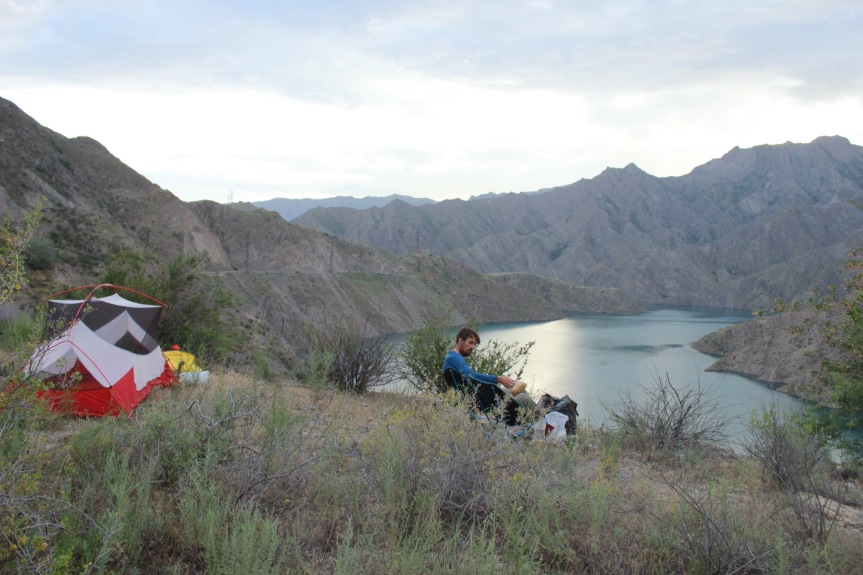 I find  Paddy busy cooking dinner after I get back from the best lake swim I’ve ever had. 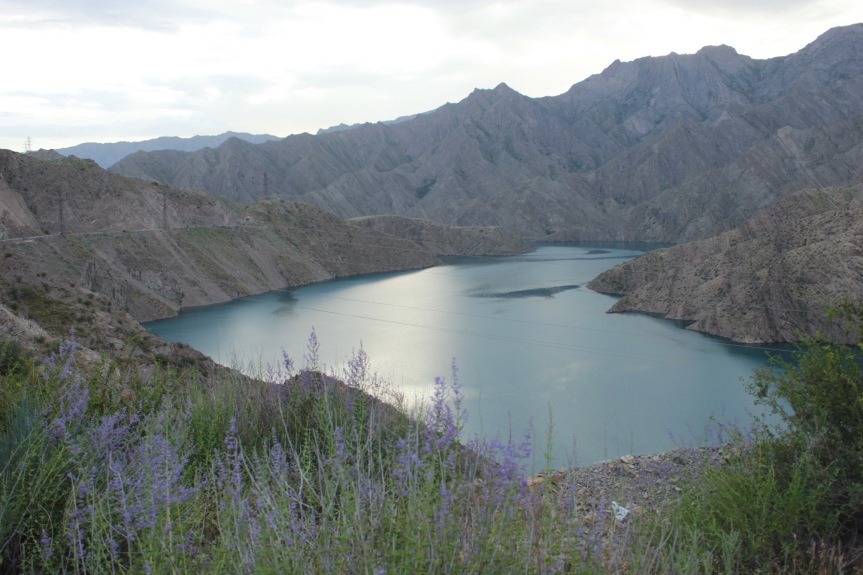 We cycle through a lot of towns and villages on our way. One in three people here drive a retro Lada car and this along with the shabby soviet buildings and shop fronts makes rural Kyrgyzstan feel a little bit like a 1970s film set. I even saw a small scruffy dog trotting down a street with a string of sausages clamped it its mouth. 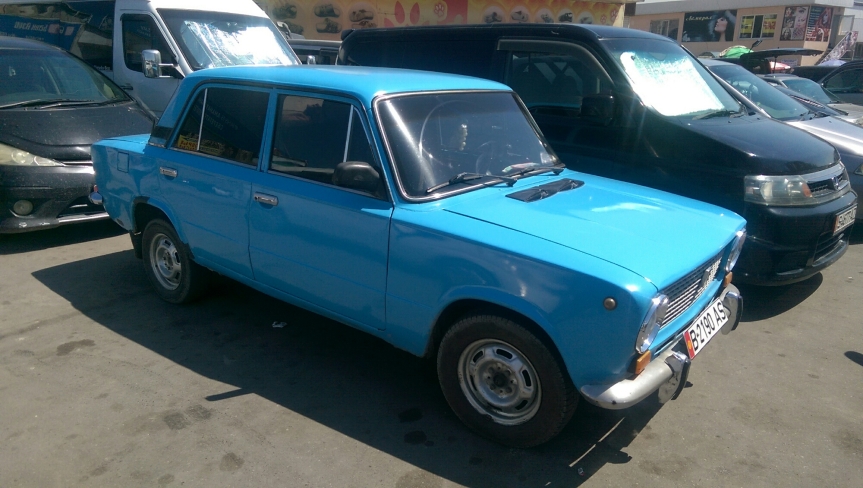 It reminds me a lot of a family holiday in Bulgaria I had in my teens.

We continued to experience the warm hospitality of the Kyrgyz people on our journey north.

One evening we stayed with a family who were teaching some visiting kids from Osh how to ride. We both got a go too. In my excitement I slightly ‘overdid’ my mount and nearly completed a full somersault over the poor creature! 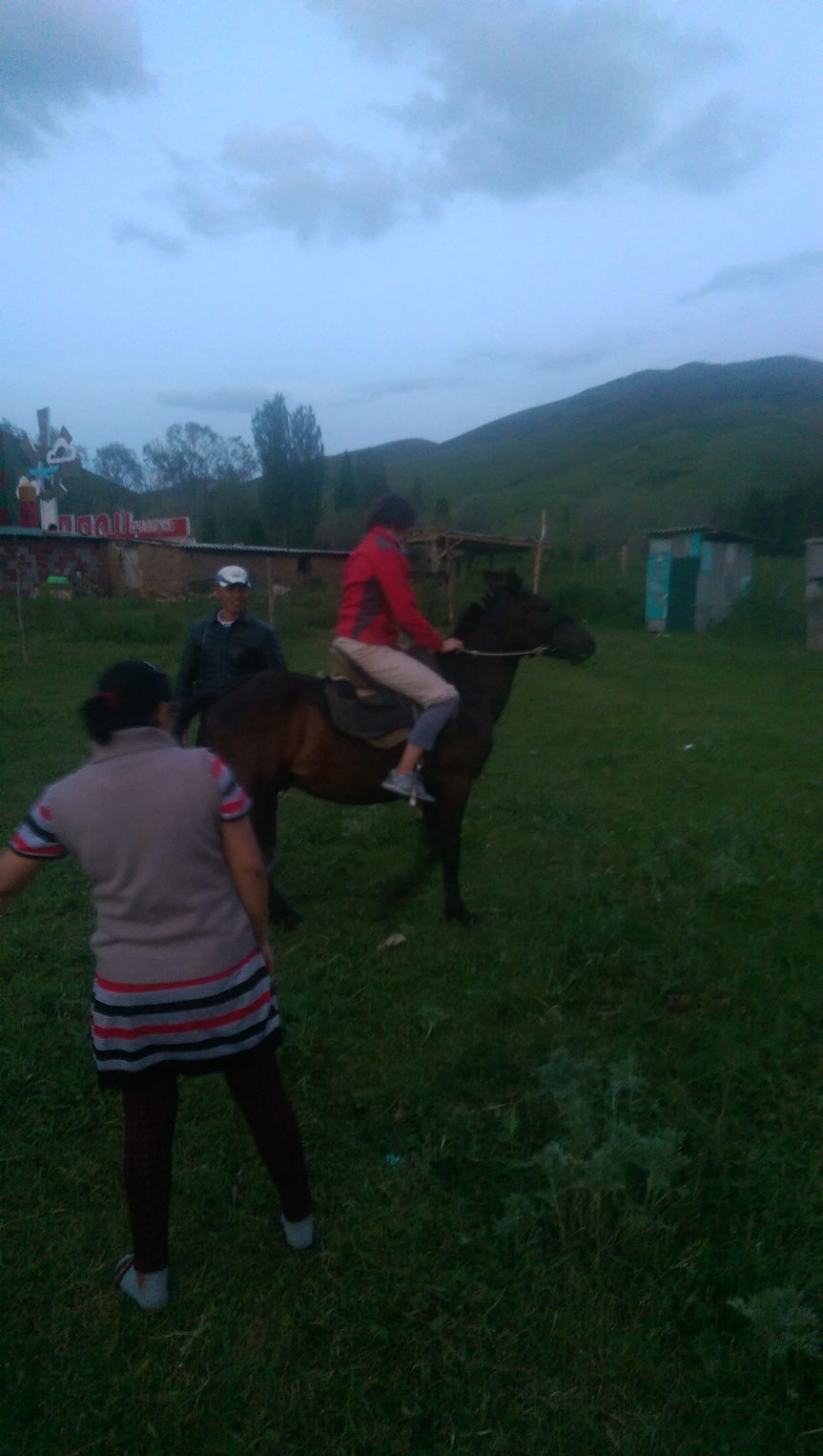 Once on, all was ok!

Another evening we pitch our tent near some yurts and are presented with a pot of fresh hand-churned clotted cream. After our horse meat chilli (a dish we cook a lot) we had it with biscuits and our honey glazed peanuts. 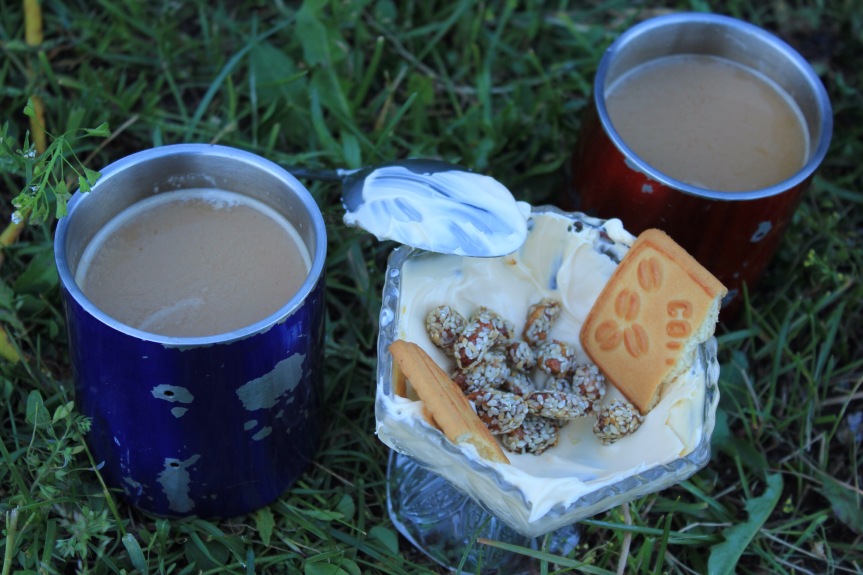 It’s the best meal we’ve had so far! 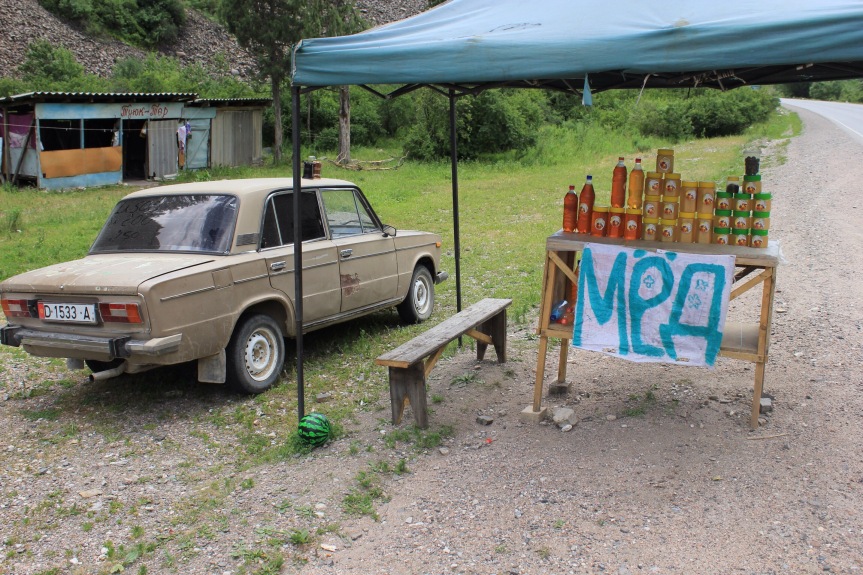 Paddy also treated himself to a bottle of honey which was extracted fresh from the hive in front of him. 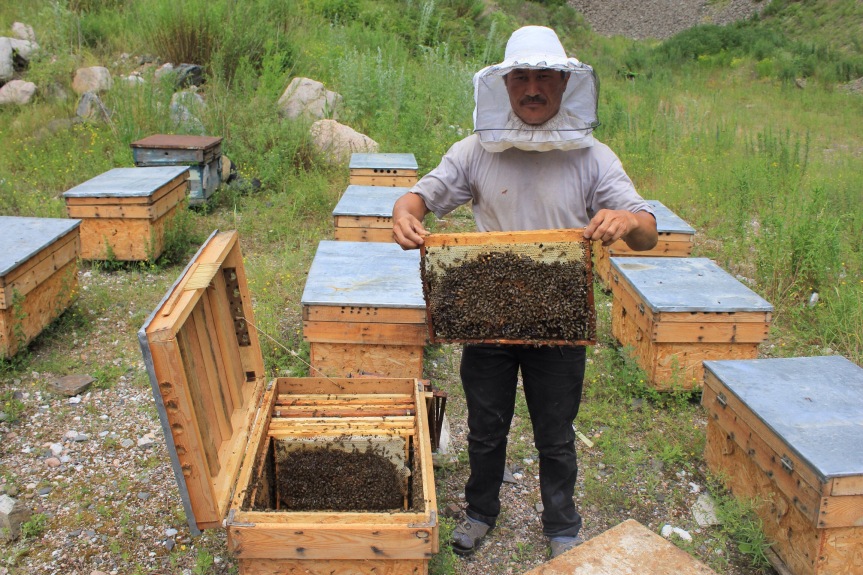 We are also taking advantage of the abundance of seasonal fruits available to have with our porridge in the morning. 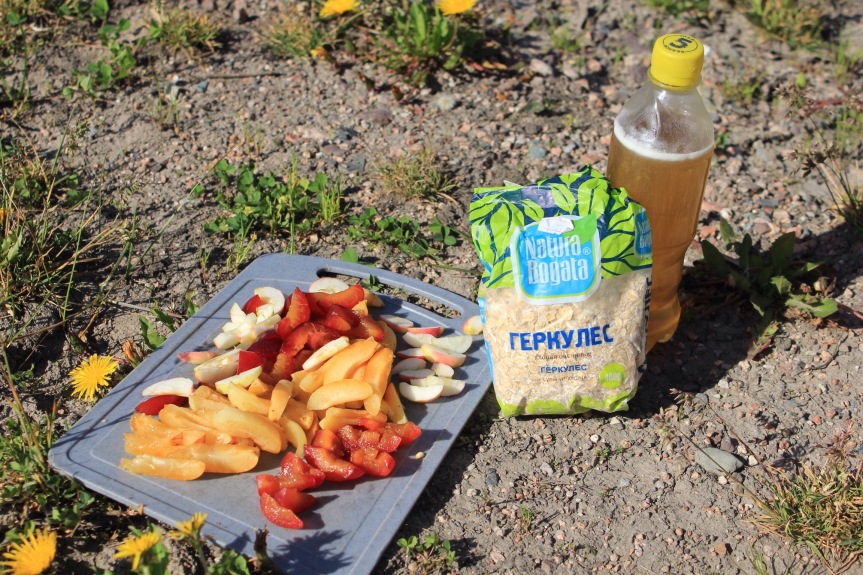 So, despite the poor food in restaurants we’re certainly not going hungry!

The hot weather disappeared on the last day and we found ourselves sheltering under a lot of trees to escape the heavy rainstorms.

On one such stop we were invited in for ‘chai’ by an elderly man.

He plied us with his homemade brandy, bread and his own freshly prepared apricot jam. 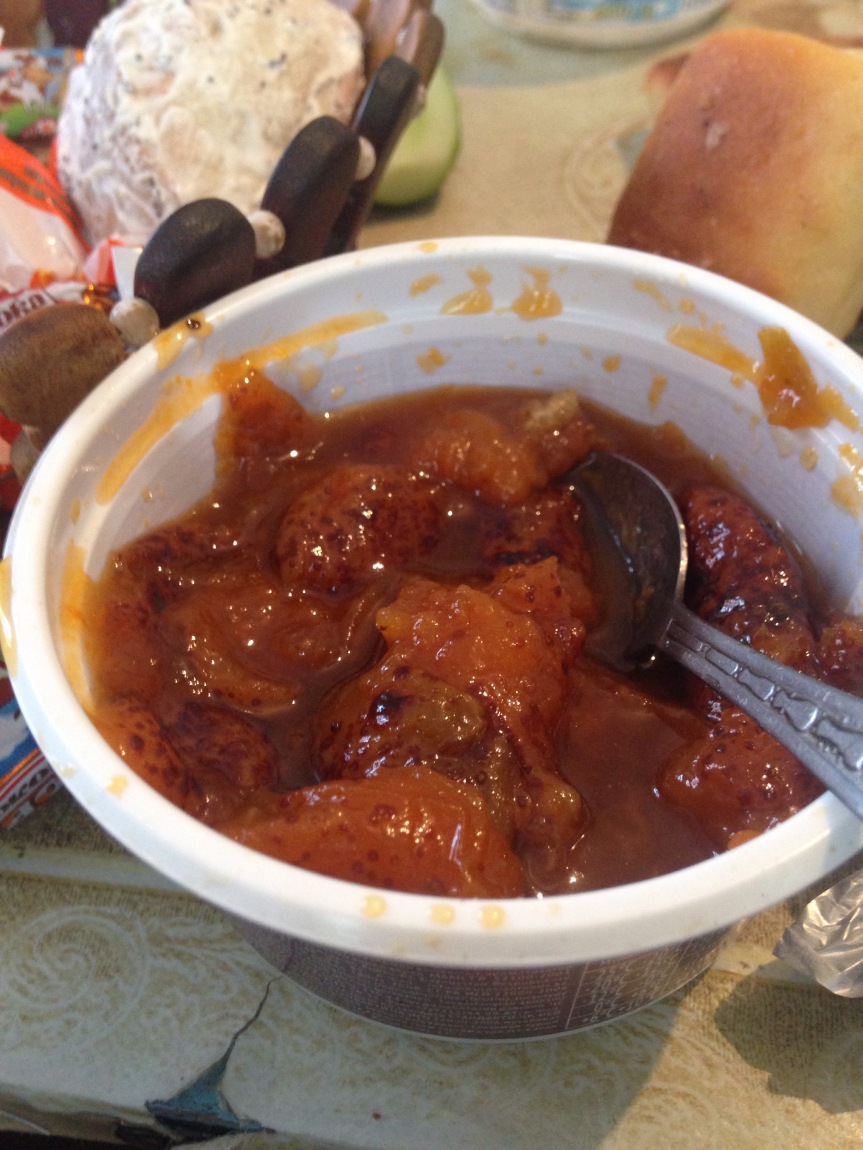 While we ate he told us (all through eloquent gestures and sign language) that he was 76 years old, his wife had passed away 10 years ago, that he had 4 children and 8 grandchildren  and that he had a bad heart for which he was taking 8 different kinds of medication.

He then got out his world map to see where we had cycled from. 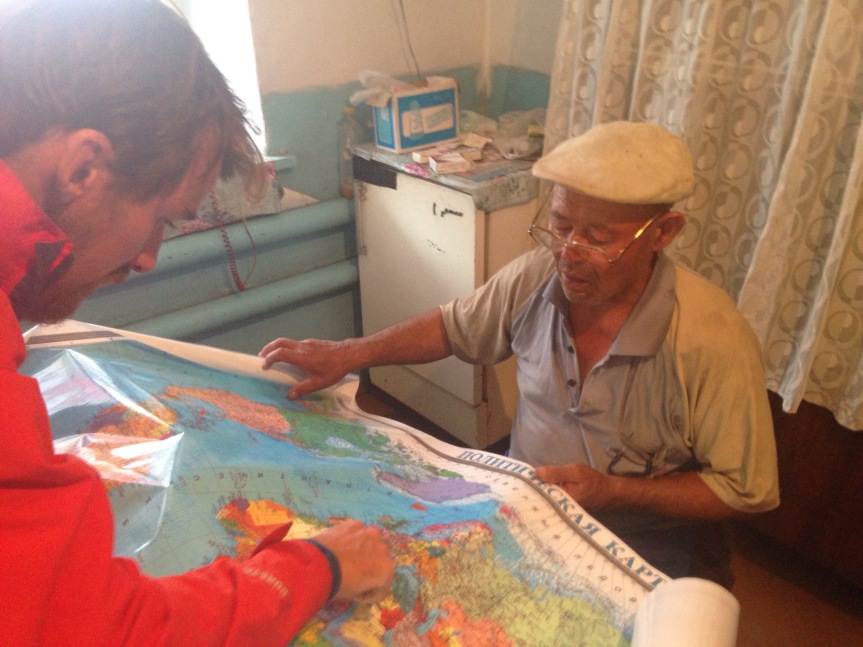 After hearing about our trip Paddy showed him his taped together shoe to give him a laugh.

He didn’t find the broken shoe very amusing. Instead he disappeared for a few minutes. He came back with his cobblers kit… 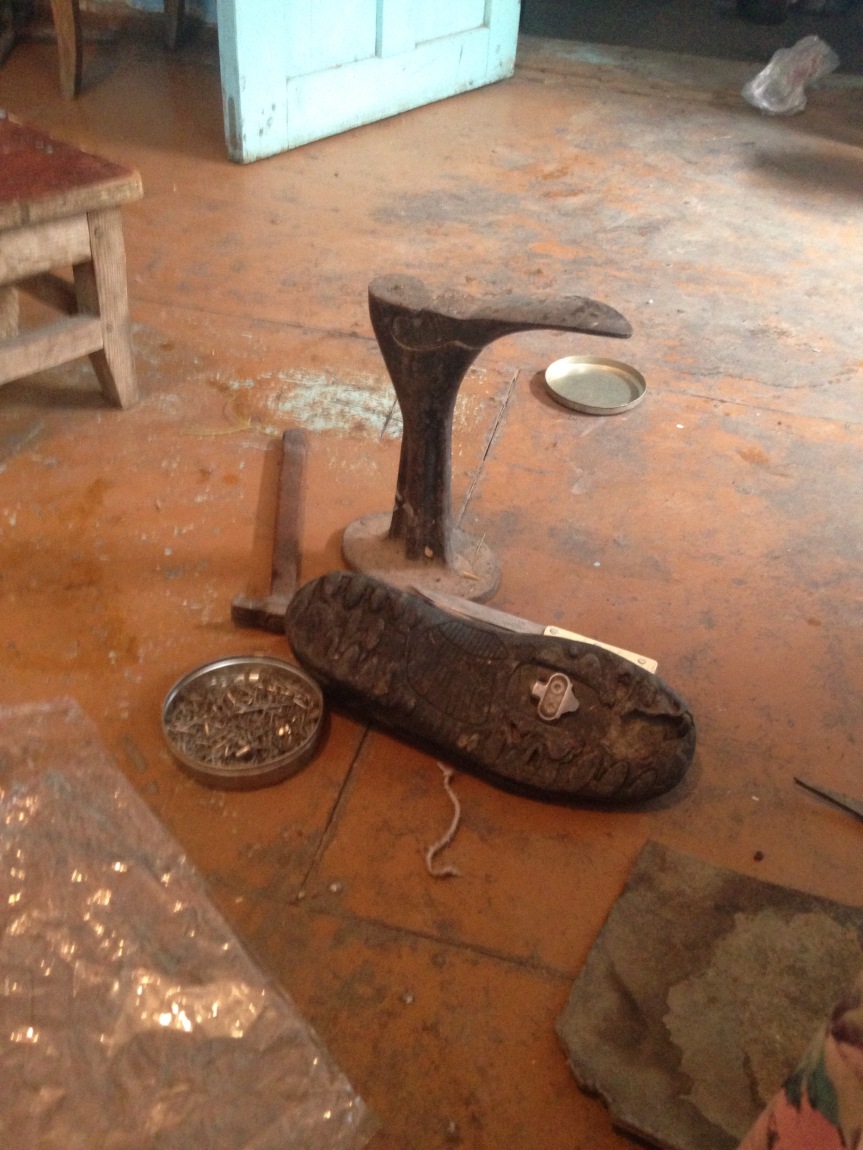 And proceeded to first tack paddy’s soles back in place and then sow the holes in the fraying fabric. 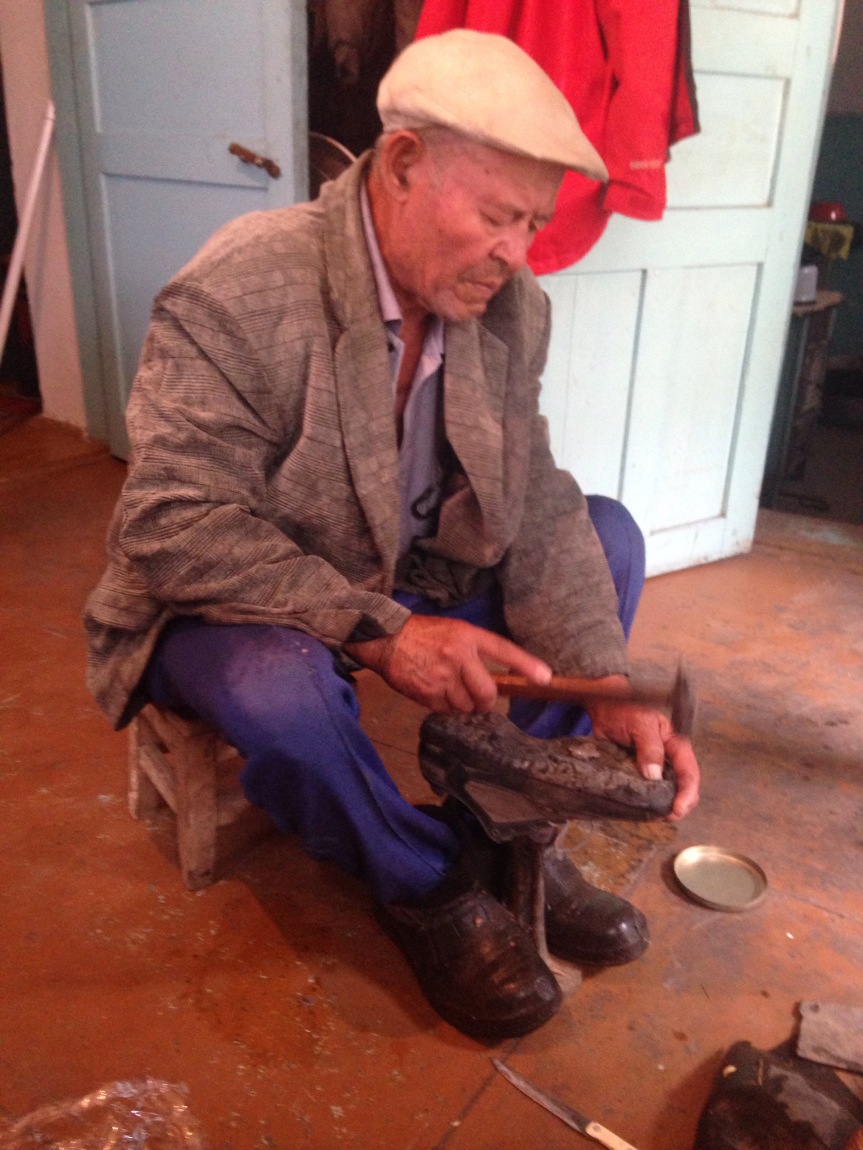 This is the kind of kindness you experience in Kyrgystan.

One thought on “Following the M41 north to Bishkek”