The visa applications and the ride south from Bishkek via Song-Kol lake had both eaten into our schedule more than we expected so we were now planning to cross the Tajik border a week later.

Normally this wouldn’t be a problem for most countries but Tajikistan and Uzbekistan – our next two destinations – require you to put a specific date of entry and exit on your visa. On top of this, we needed to leave enough time to apply for the dreaded Turkmenistan visa in Dushanbe…
We were still OK on time as we had a 45 day visa for Tajikistan and there was no point stressing. In Osh we met a couple of other cyclists who had completed the Pamir, including the Wakhan valley, in around 22-24 days.

Our route to the border crossing would see us backtrack along the M41 back up to Sary-Tash where we had stopped for a night coming over the Irkeshtam pass from China 40 days previously.

We had heard that an annual horse festival was taking place over the weekend somewhere in the region so we were keen to see if we could fit this in on our way through. After visiting the website we discover it’s directly on our route towards the Tajik border, 5km from Gulcho.

We leave Osh on the Friday morning having spent Thursday cleaning the bike, stocking up on supplies and catching up with news back home.

We were keen to get to the horse games site that evening so we didn’t miss any of the festivities the next morning but the ride involved a long gradual incline, plus a hard climb over the Chyrchyk Pass. This meant we needed to hitch a ride.

We cycle 15km out of Osh and then pull up on a long straight section. Traffic is a bit on the slim side and all the vehicles which could take the tandem seem to be turning off or stopping just beyond where we’re stopped.

After an hour we admit defeat and get back on the bike and cycle another 10km up the road. We stop and make lunch and then try again. A nice chap and his little boy stop and we lift the tandem fully loaded into the back of his pick-up truck. He’s only going to the next village 13km but it still helps a lot.

Traffic is even slimmer here but after a few tries we managed to hail down a second ride and luckily this guy is going all the way past the turning to the festival.

It’s 4pm and we still have 15km to cycle up a steep track to get to the festival site. It’s a very beautiful setting and we pass many yurts on our way as we follow a small river up stream winding our way through the valley. By 5pm we’ve done 4.5km and we’re both starting to feel tired and hungry. Maybe we won’t make it up there before evening after all…

Luckily for us an empty pick-up truck trundles pass and we manage to steal a ride for the next 7km. After this the track gets VERY steep and the last kilometre is impossible for us to ride so we have to push.

Sweaty and breathless we push the tandem over the last ridge and the valley starts to open out. Paddy climbs up a green slope to check we’re in the right place and comes back accompanied by two adolescent boys. They help us push the bike up the last 500m and we find ourselves on a grassy plain, surrounded by pine wooded hills dotted with clusters of yurts.

We are greeted by the festival organisers who show us where we can pitch our tent. A number of happy helpers arrive and assist with our set up before getting distracted by the helinox chairs… 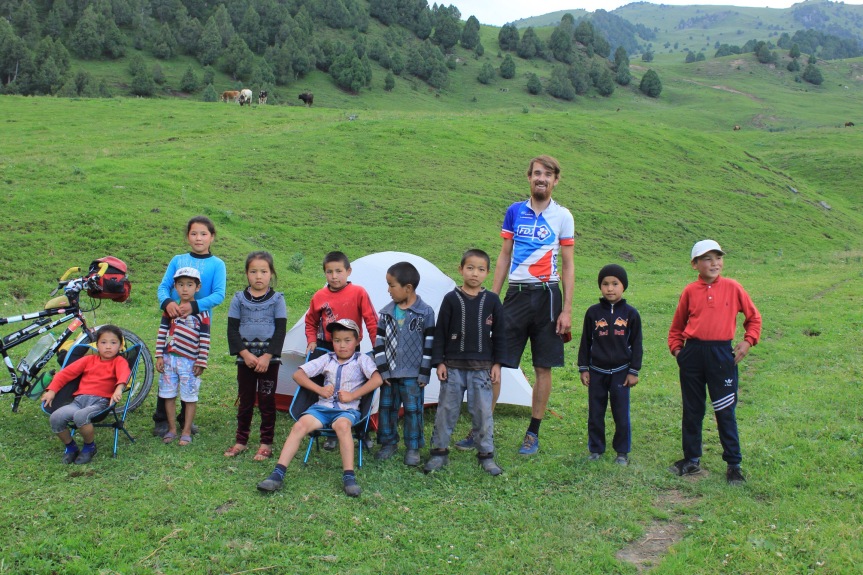 Later, some guys from Belgium who have hiked up here come over to say hello and we sit chatting with them while cooking dinner.

Happy to hear that the festival wouldn’t be kicking off until 10am we snuggle down and look forward to a lie in.