More Croatia to come but first we had a week or so to spend cycling across Bosnia and Herzegovnia. We were both keen to visit Sarajevo the capital before heading north to Banja Luka the capital of the separate mini state ‘Republika Srpska’ – more to come on that!

While my memories from the early 90s belong to the hazy past of my childhood I still remember news bulletins about Bosnia. Anyone a little older might just associate the country with two terrible things: War and Genocide. Since our travels through the Balkan states my understanding of the breakup of Yugoslavia and the wars which followed are much clearer than they ever were. What happened in Bosnia however is hard to comprehend due to the conflict being fuelled by longstanding ethnic tensions between the Croats (Catholic), Bosniaks (Muslim) and Serb (Orthodox) populations – there is no doubt about it though, the war which only ended in 1995 was brutal, and despite buildings having been rebuilt, towns re-established and peace celebrated for over 20 years now, the scars that this turbulent conflict have left are still there to see.

We left our campspot near Dubrovnik and headed for one of the border crossings with Bosnia marked on our map. The harsh headwind that we had battled through the day persisted and we were keen to get away from the coastal road with its busy traffic and fast moving tour busses who always overtake too close!

There were a few border crossings marked on the map and we chose the closest, Slano. It was a steep 15km climb up but we were both happy to be away from the main road. However, near the top we’re stopped by a nice Spanish family who tell us they were told it was closed to internationals. With only 3km left we decided we’d try anyway – we hope it was because they were in a car and walkers and cyclists were OK to cross here. Otherwise we would be forced to get back on the busy coastal road and cycle the 60km detour to . To our dismay the lone guard on duty at the top tells us we have to turn back. Paddy pleads but he doesn’t budge. There was one last thing we could try – for me to turn on the waterworks. I’m not proud of employing this tactic but sometimes it’s needed… It was time to put all those acting lessons to good use.

As it turned out, I didn’t even have to cry, all it took was a wail of disbelief and a burying of my head in my hands for the guard’s eyes to soften and tell us we could cross… Trying to hide our glee and with lots of hurried thanks we jump quickly on the bike and whizz off down the hill before he can change his mind. Then we stop at the bottom to celebrate the rather overwhelming achievement of reaching our 20th country. Only 6 left!


There was still a strong, cold headwind here but for now we were going downhill with the promise of some hilly terain through a big valley to come. As we get to this valley however we see signs for the Ciro bicycle trail which runs all the way from Mostar to Dubrovnik along an old railway line. The trail has recently opened with help from the EU and a cyclist had told us about it in Macedonia. We hadn’t been able to see it on our map though so we had given up hope of finding it. It was a stroke of luck that we had stumbled across it here.

Because it runs along the old train track it would cut out the majority of those small climbs as well as promise to offer great views across the landscape from its elevated position. What’s more, the route has information points dotted along it which gives the rider snippets of information about the old stations and other points of interests. Bravo EU!


A little further along we see the first tell tails of the recent war. Whole villages of beautiful old stone houses abandoned with their wooden and terracotta roofs caved in or gone completely. Similar hamlets can be seen across the valley on the other side. We also cycle past our first land mine sign – literally on the side of the road… 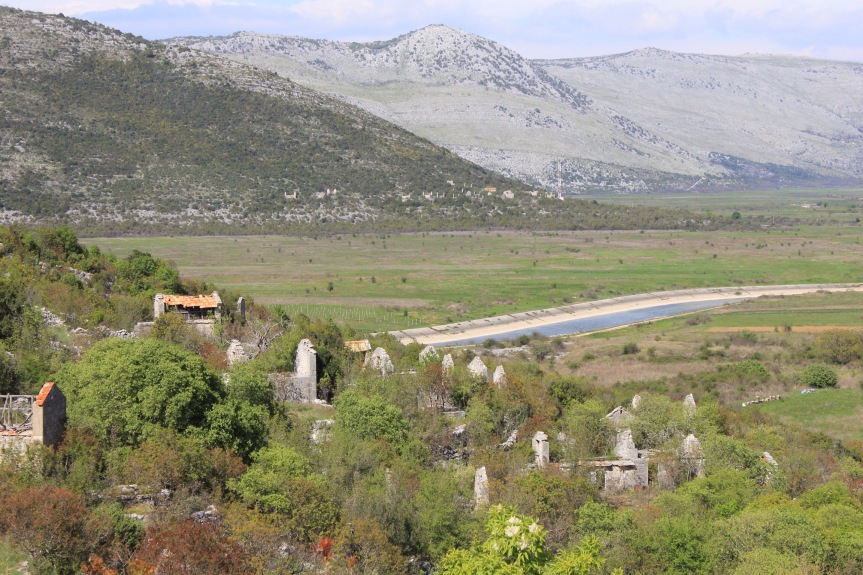 As we had cycled across the border with Bosnia we had seen warning signs about the potential land mines. We had also seen warning signs for large snakes; a danger that wouldn’t have resonated quite as much as the land mines except that I had crouched down and nearly weed on a huge black one just a few days before in Montenegro… Both would mean being extra sensible about where we camped with no straying from the road in remote areas!
The next day we reached Mostar which isn’t much to write home about until you get to the centre which is home to the old town boasting some more lovely Ottoman architecture and the famous Stari Most bridge with its single high-reaching arch over the river. We don’t stay long – just enough time to wander about the cobbled streets with an ice cream and watch a member of the diving club jump off the bridge for tips! 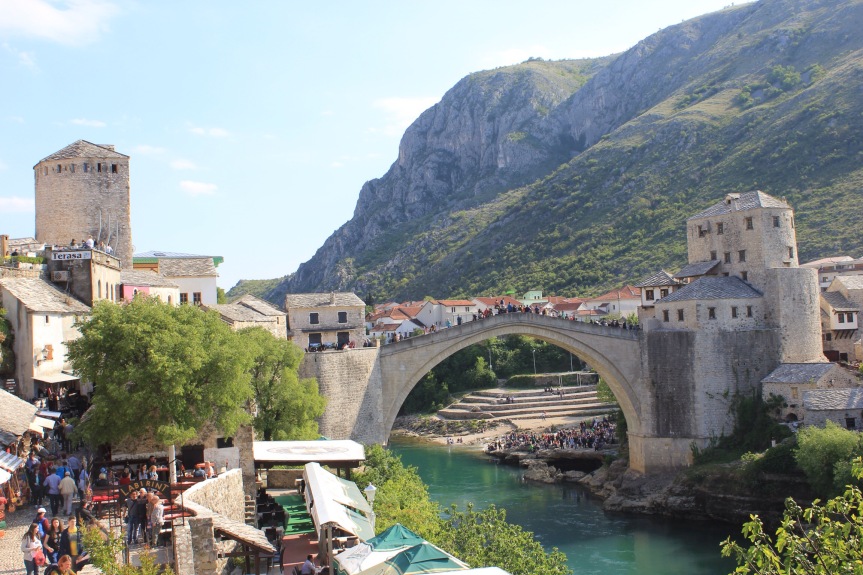 We’ll cycle out of town to find a camp spot from here before making our way to Sarajevo.