Our five days on Susanne and Orhan’s horse farm were a welcome break from the cycling. Each morning would start at 7:30am with the morning feed followed by the mucking out of the 15 stables. 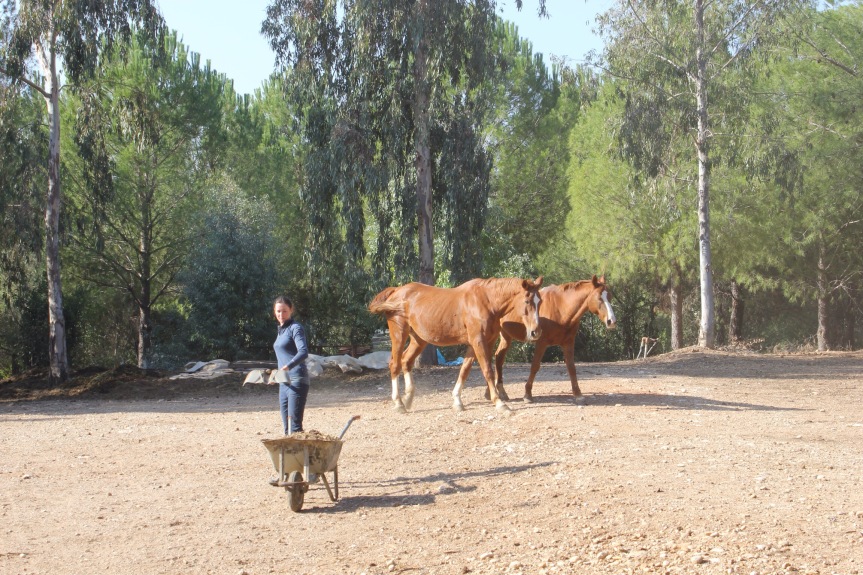 Our afternoons were often spent separately, Paddy fixing the sink unit in the kitchen and me gardening in the veg patch.

We also spent a lot of time with Emre and his son Met collecting firewood and cutting down trees to fix a couple of rotten beams in the outhouse. 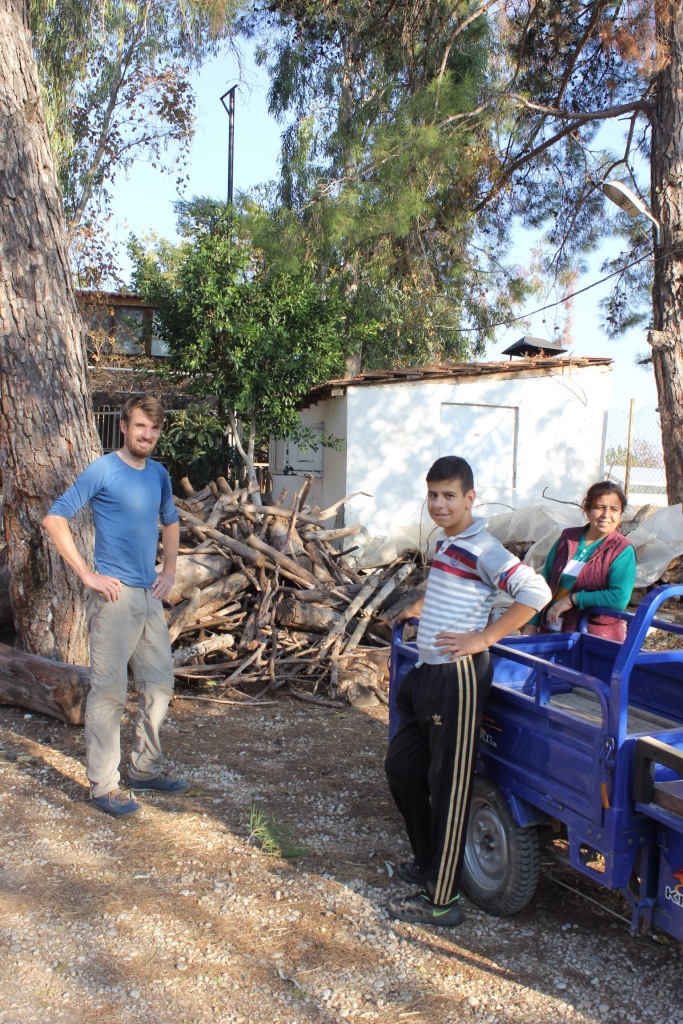 There was plenty of time to relax and we both got addicted to eating all the pomegranates, oranges and grapefruits from the garden. 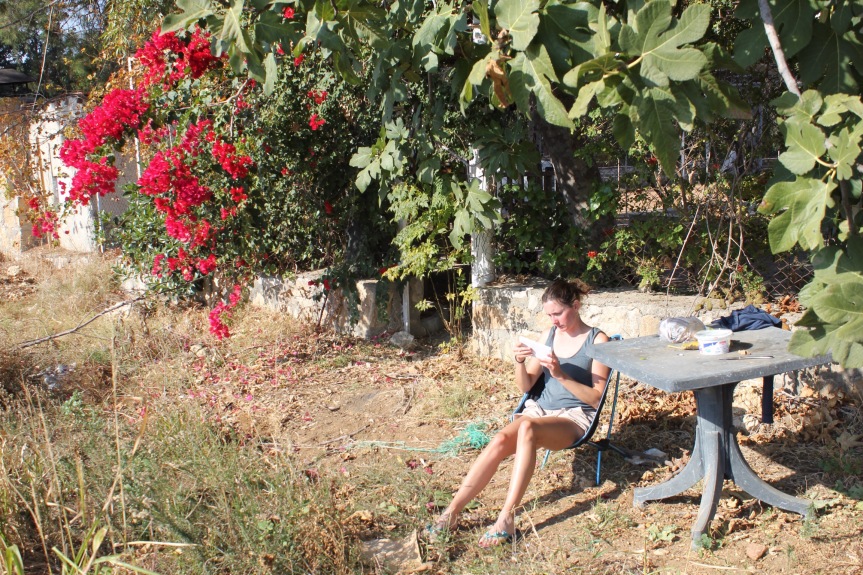 So after a week stopped on the Workaway farm we left Susanne and Orhan and started our next leg of the Turkish coast. We were heading to Fethiye 370km away.

We didn’t do loads of miles on our first day as we stopped in Antalya for a couple of hours to get a new screen fitted for my iPhone – having dropped and smashed it two days before… While we waited we sat in the sunshine of the main pedestrian square eating sandwiches and looking out across the old city to the sea. Antalya sits on the east side of a large bay. We dropped down to the main road which curves its way round the coast and passed a few nice beaches and coves. After just 58km we decided that a bottle of wine and an early stop was too irresistible. We stopped on the edge of what was obviously an old beach resort area still with beachside changing rooms and delapidated looking pavilions. The whole place was fenced off by barbed wire which initially confused us as there were lots of people picnicking, fishing and generally milling about on the beach. After a short search we spotted a large gap cut into the fence. If the locals were happy to break in so were we. It was lovely sitting on the sand sharing this gorgeous Sunday afternoon with the local families. Lots of people had lit barbecues. 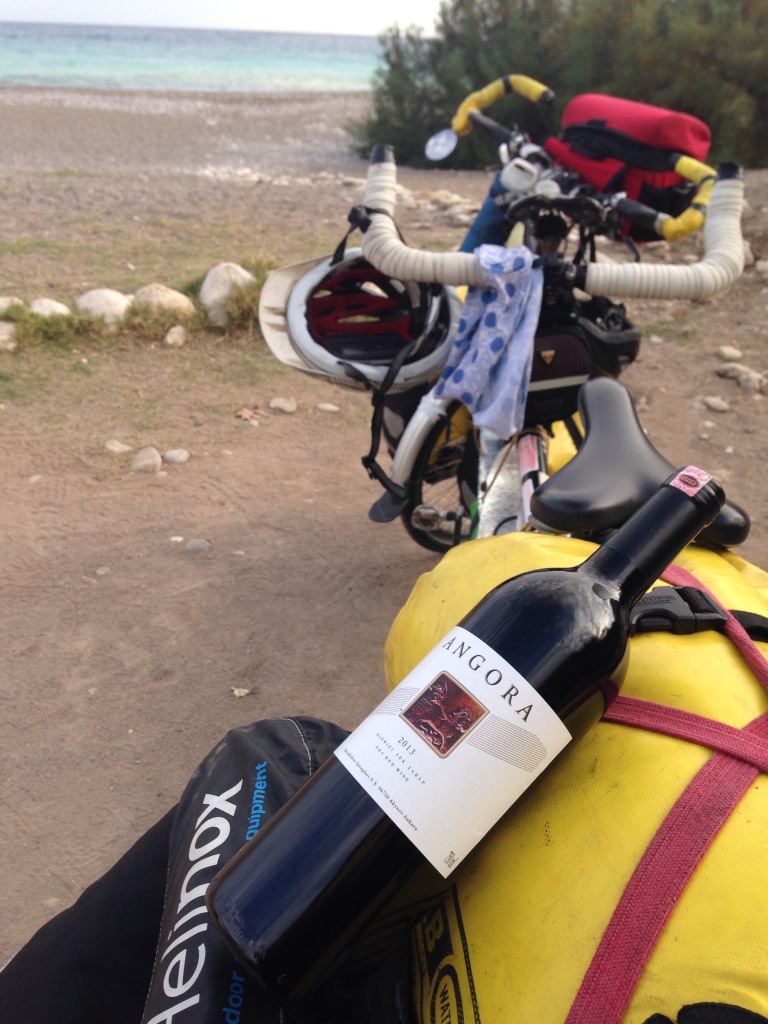 We had got ourselves a half bottle of some very nice Anatolian wine which we sipped on the shoreline looking out across the calm bay, the tantalising smell of kebabs wafting over from the other picnickers. Tanker ships moored in the bay peppered our view. At dusk a large puff of dark smoke rises from each of them in turn as their generators are switched on. Soon clusters of orange lights are floating on the surface and a few lonely stars appear overhead. We copy the locals and get a fire going after dinner and sit reading before climbing into the tent.

The second day saw us start to cycle through the impressive mountains which run parallel to the coast. They are covered in rich green pine forests. We turn off down to the small village of Cirali planning to find a spot to camp before walking to the Eternal Burning Stones of Chimaera which are best explored at night.

We knew that heavy rain was forecast that evening so finding somewhere undercover was desirable. Camping on the beach in prime tourist spots can be a problem around here. It’s not as bad as it would be in the height of summer though and after chatting with a lovely barman he offers us a space under his awning for that night. By 7:30 the rain is holding off so after dinner we set off on the 90minute walk up to the Chimaera stones which are pretty cool. They have been burning for over 2000 years! A big group of locals had claimed the biggest and most impressive fire toasting marshmallows on long sticks but we found a comfortable spot a few metres away and with our backs warming against the flames we sat talking about the prospect of coming home

When the rain started at 10:30pm it didn’t stop all night and unfortunately we woke in the morning to find that a puddle had formed under the awning right where our tent was… Things were in a worse state than they would have been had we just camped out in the storm – the bottom of our tent was pretty soggy and the rain was forecast to last all day and well into the next evening… so we decided to stay put, book into one of the rooms behind the bar and sit the storm out.

We managed to dry everything out by the next morning and with the forecast just promising rain again that evening we set off early wanting to reach Finike. The plan was to cycle along the 1km track which connects Cirali to the famous hippy trail, ancient Lycian site of Olympus which sits on the beach just around the headland. Unfortunately, the 24 hours of rain the day before had turned the track into a raging river. We had two options – push the bike across the beach instead and reach Olympus that way or go round by cycling back up to the road 400m up. We decided to push the bike along the sandy, pebbly beach. A tough 20 minutes but it would be much easier than cycling up a steep climb for 90minutes, especially with our cassette in its current condition…


The problem was, was that when we reached the headland we discover that the usual path through the archaeological site was now covered by a lake… To make things worse, while we had been pushing the bike along the sand, a giant rogue wave had come crashing towards us. Paddy had managed to escape but I had been holding the bike at the time and so ended up with very wet feet – not even goretex NorthFace shoes save you if a 2ft wave washes over you…

Our only option now was to find a way with the bags and the bike through the higgledy-piggledy, rocky, overgrown paths which wind their way up through the old ruins. It meant taking the bags through first and then going back to carry, drag and push the tandem through. It took us two hours to cover 1.5km of ground! Here I am with the bike after we finally meet back up with the main path which leads to the ticket office. We had just battled our way through the old amphitheatre arch behind me.

Back on track, we wash down the bike (and my shoes) thoroughly with a hose to make sure no sea water is left and then we get going. Its a really nice ride out of Olympus and we soon link back up to the main road and make good headway.

It stays dry all day and we do manage to reach the long stretch of beach which leads up to Finike. We camp underneath this handy picnic area which are dotted all the way along the shoreline. 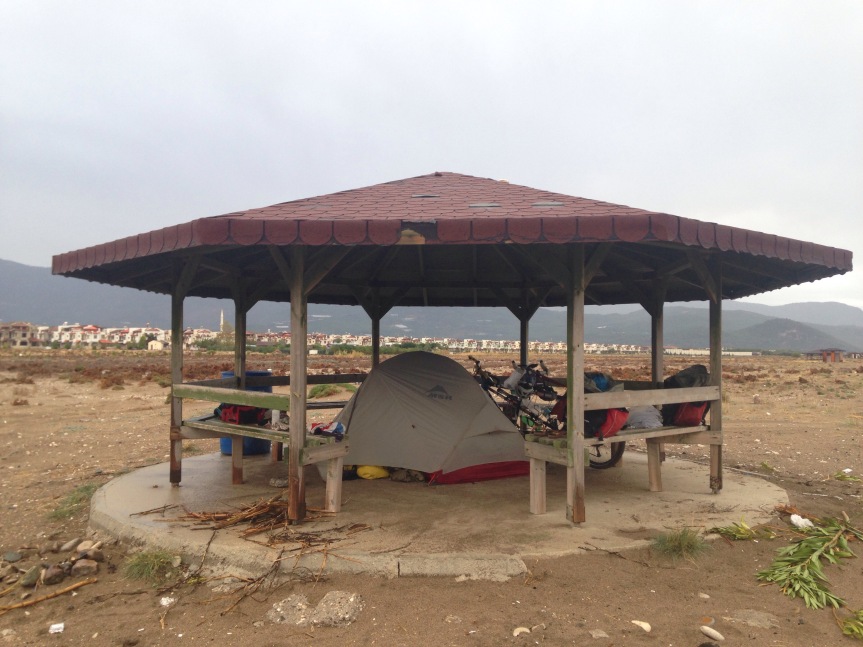 Having stayed dry after another overnight storm hit we wake up early and find snow has been dropped on the mountains above Finike. It’s still raining but thanks to our large roof we eat breakfast and pack down easily. We have an hour of rain on the bike but the weather soon turns pretty good with some nice patches of sunshine. It’s pretty flat for sometime and we speed along stopping to eat lunch on this pebbly beach.

We then turn off the main road down towards Ucagiz which is where we were headed. 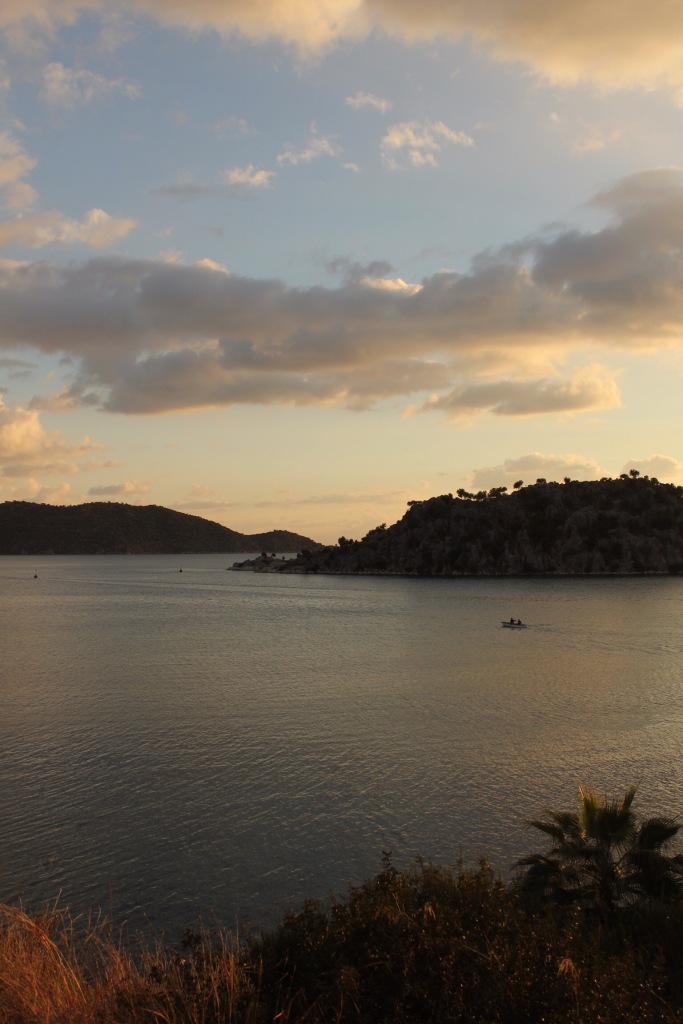 When we get there it’s as beautiful as the guidebook promised – normally teeming with tourists in the summer I think we were lucky to be here on the 1st December! The whole place was idyllically sleepy and quiet. 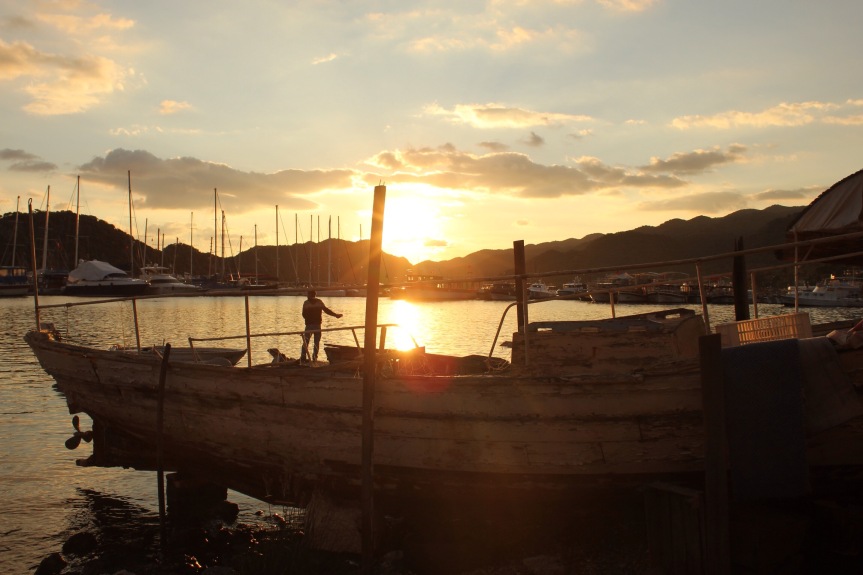 After walking around the harbour for a while we spot a small patch of grass just off the main path next to some old ruins. We pitch out tent and cooked dinner right on the water front over looking the gorgeous harbour. The clouds slowly part and we enjoyed an incredible sunset and then a spectacular nights sky. A couple of locals walk by with a quick glimpse and ‘merhaba’ as we sit drinking our beers and eating dinner. At sunset the Mosque lights up green and rings out with the usual call to prayer; cats flit here and there along the path. The lights from the many boats make silver ribbons across the flat calm water and we watch the last few vessels arrive back to harbour and drop anchor. It’s very sheltered and we have a very peaceful nights sleep.

To join back up to the main road we had a very hard 20km climb out of Uclgiz the next morning. There was a bit of a headwind but clear blue skies. It was really nice to have an extended cycle away from the main road and we had some lovely views of snowy mountains.


The wind picks up quite a bit in the afternoon but we manage to find a sheltered ‘shelf’ of land in between a few houses on the outskirts of Kalkan. Nobody seemed too bothered about us setting up camp.
Day 6 – 90km

After stopping in Kalkan for a cash machine we got going and ate up the miles towards Fethiye where we would be staying with Kathy, a warm showers host from the UK! After the climb away from Kalkan it wasn’t too hilly and we arrived into Fethiye by 4pm. We met Kathy at her apartment and got fed delicious food and good company that night. Here we will rest up for a day as rain is due tomorrow before completing the last section towards Bodrum!

It’s been a really nice cycle along the Lycian coast. Keen walkers should definitely check out the Lycian Way path which stretches across this stretch of coast.