A young law graduate called Hamid had offered to host us in Shiraz. It was really nice sharing his super central flat with his aunt, sister and younger brother. Hamid was busy looking after his mother’s tailors shop while she was away visiting family so we only got to hangout with him in the evenings.
His 22 year old sister Fahima who is studying tourism at the local college however was still on her summer break so she offered to show us around one day.

We started at the late 18th century Vakil bazaar and wondered through its many domed brick streets and visited it’s two green courtyards. 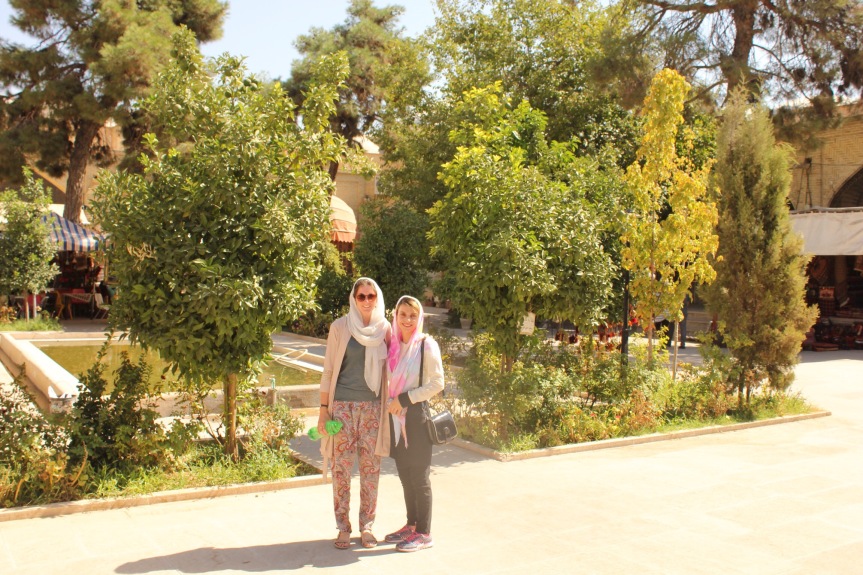 After a coffee together we headed over to the Arg-e Karim Khan – the fortress-like royal court of Karim Khan who, the 18th century ruler who is responsible for most of Shiraz’s historic buildings. 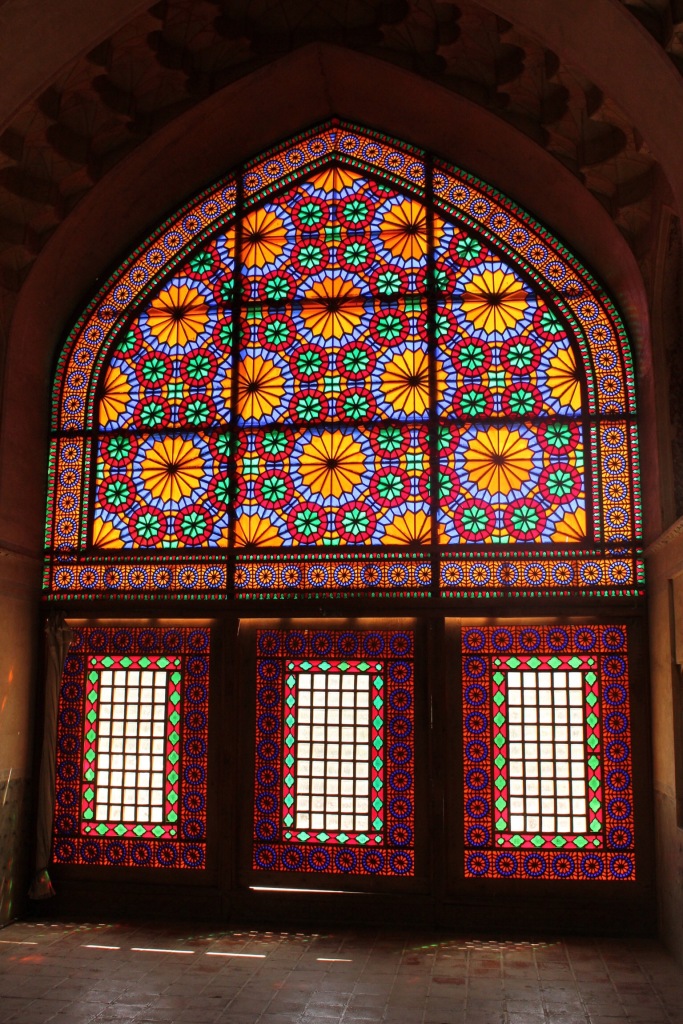 After lunch, Paddy and I headed down to Aramgah-e Shah-e Cheragh shrine complex. In 835 AD Sayyed Mir Ahmed, brother to Imam Reza’s (who’s own pilgrimage site is in Mashhad), was hunted down and murdered by the Caliphate.

We have had to overcome a minor frustration while sightseeing in Iranian cities. The very high entrance fees for all the attractions are prohibitive for those on a budget. If our guide book (published in 2012) is anything to go by, admission fees were nowhere near as extortionate a few years ago and it seems the government recently introduced a blanket tourist fee of 200 rials ($5) for most ‘attractions’. Even the smaller mosques now charge this fee and needless to say Iranians pay a fraction of the price or go free.

We don’t mind paying to see historic buildings but it’s hard to part with $10 each time when you end up walking aimlessly around a semi renovated building with no explanations or guides in English. 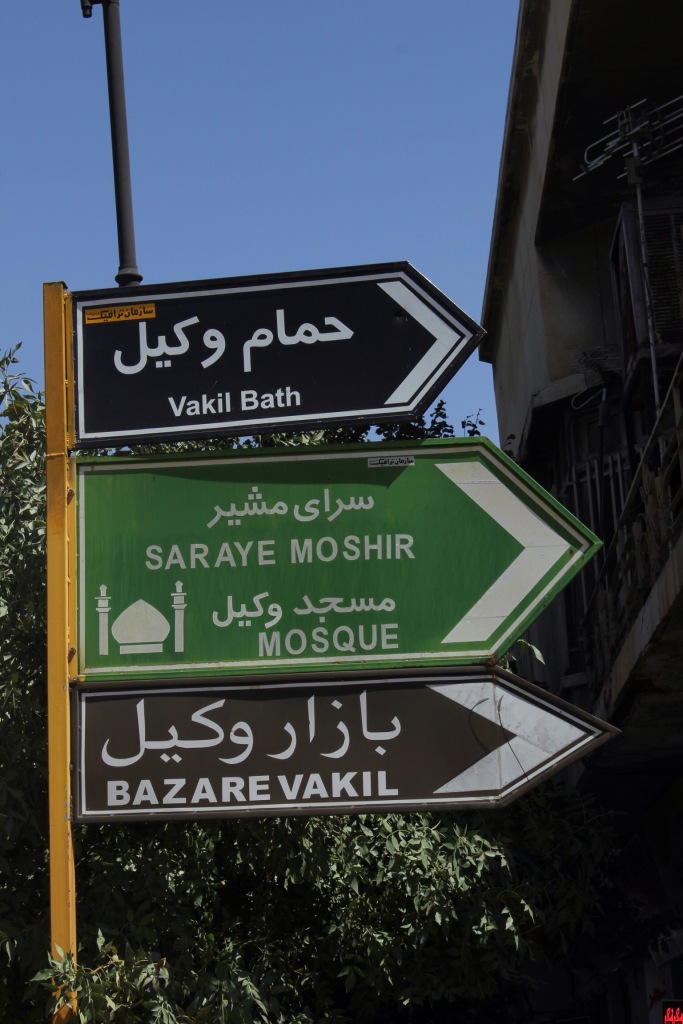 The exceptions have been when visiting the major shrine sites. Both the Harem-e-Rezavi and Aramgah-e Shah-e Cheragh complexes were completely free to enter and we got a free English speaking guide to take us around.

Eating out isn’t dirt cheap either and there is a distinct lack of decent restaurants, with fast food joints and kebab shops making up the short fall.

Thanks to our amazing warm showers hosts however we’ve been able to avoid paying any hotel costs so far and we’ve enjoyed some tasty nutritious home cooked meals.

Fahima cooked Ash one morning which is a thick vegetable soup found all over Iran. Shirazi’s typically eat it for breakfast.

That evening we went to the tomb of the famous Iranian poet Hafez. Iranians are very proud of their literary history and many of their great poets have been honoured with spectacular mausoleums. Iranians will make almost pilgrimage like journeys to visit these sites, touching or kissing the tombs while reciting some of their favourite verses. 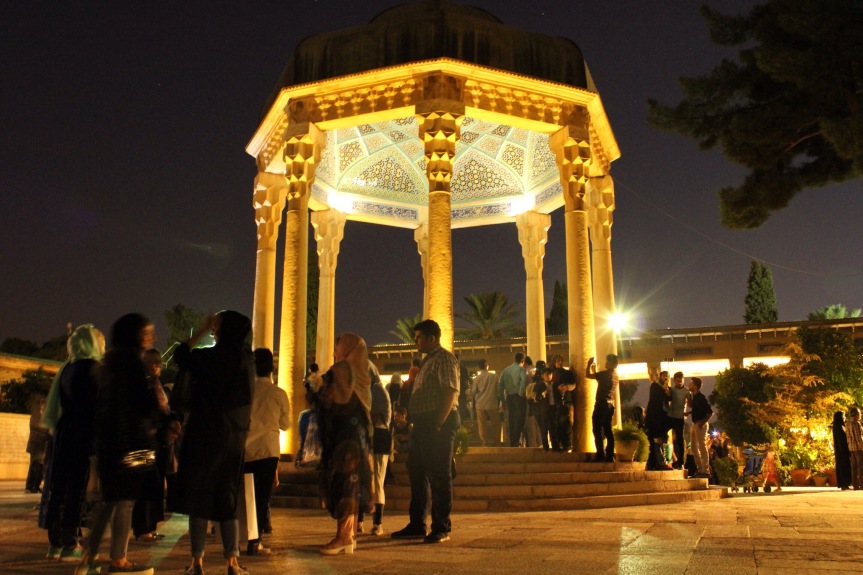 It was nice visiting after dark as the spectacular dome covering the tomb was all lit up and it was pleasant to walk around the surrounding gardens. 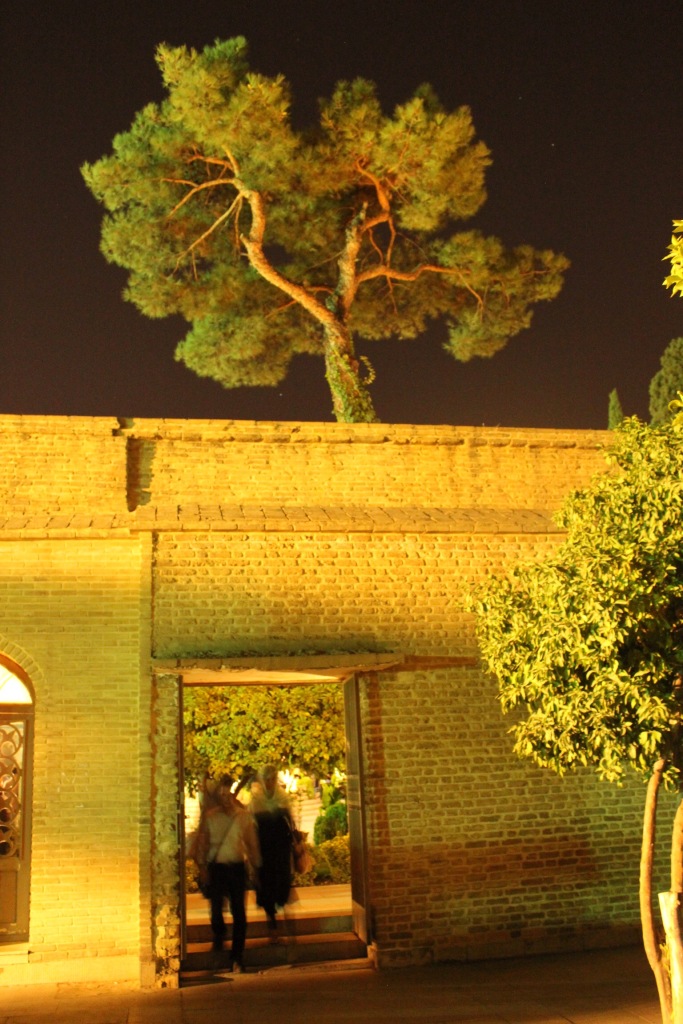 We come across a small band of people sitting in one dark corner listening to one man who is reciting a whole chunk of Hafez’s works by heart.

After spending some time near the tomb Fahima took us to the cafe to have our first taste of falooduh an alternative to ice cream but made of short strings of frozen starch. I think we’ll both stick to ice cream next time!

The next day we had a relaxing morning at the flat and then spent some time food shopping before
rounding off the afternoon with a traditional Shirazi pastime – a picnic in the UNESCO Bagh-e Eram gardens. 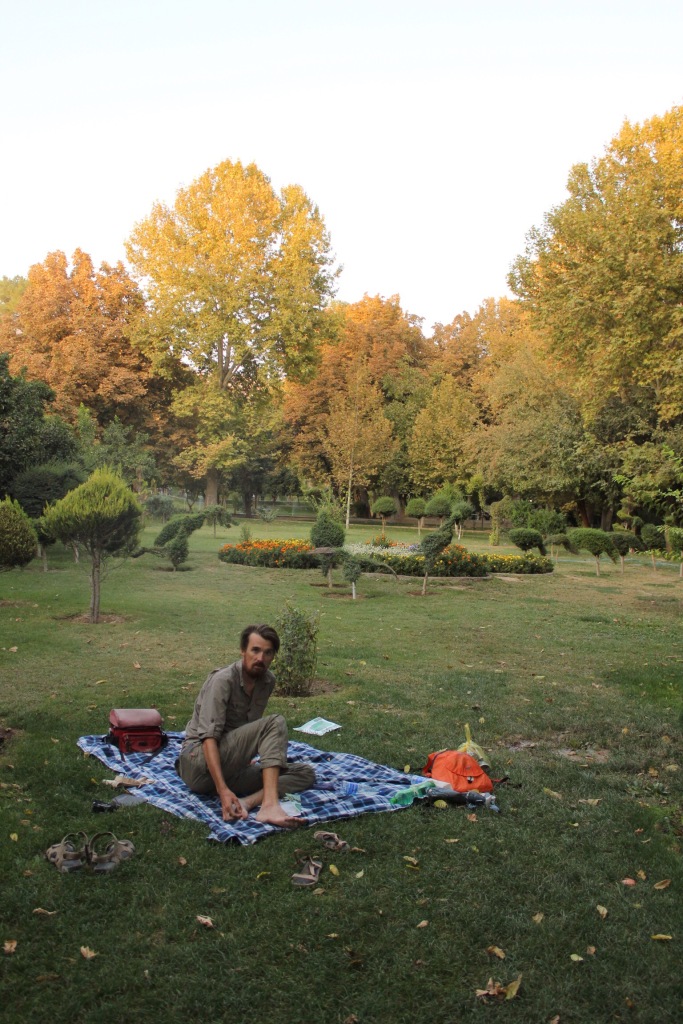 Not wanting to disturb Hamid and his family too much by overstaying our welcome we decided to spend a night with Azhang (civil engineer) and Bita (architectural consultant), another warm showers host who live in the west of the city for our last night before heading north to Isfahan. Actually they had only been signed up to the site for a week so we happened to be their first guests!!

They were a super couple with a lovely apartment and we had a great evening with them and needless to say, we were VERY well looked after!

They cooked us a delicious meal of Dizzie which is a very traditional Iranian dish.

A large watery stew of chickpeas, potatoes, lamb, tomatoes and carrots gets cooked on a low heat for a good few hours.

The liquid is drained into a large bowl and the meat and veg then pounded into a thick paste.

Ladles of the liquid are placed in your bowl and then you tear pieces of bread into it. Some people like to mix the paste into their soup but others eat it separately with bread, salad, pickled veg and olives. It’s very tasty!

After dinner we took a stroll together in the local park. People stay up late here including young families so the park is a hive of activity. Azhang treated us to an amazing ice cream – another thing the Iranians do very well.

In fact the average Iranian has a very sweet tooth and cakes, sweets, ice cream and pastries are eaten at all times of day. They love cake so much they even eat it for breakfast!

The next morning happened to be a Friday, the weekend in Iran, so Bita and Azhang were able to have a long breakfast and then cycle some of the way with us on their own bikes. They are both very fond of the outdoors and have a dream to plan their own cycle tour across Russia in the next few years. 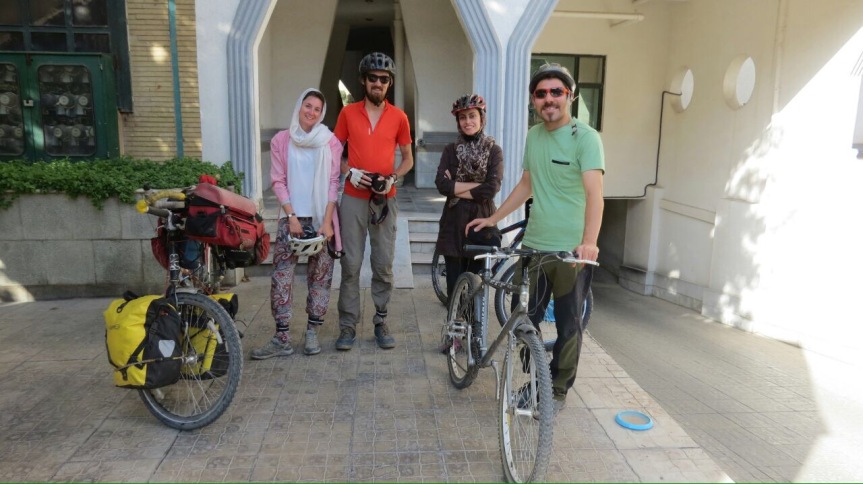 After 15km of cycling together we stopped to say goodbye. But not before we let them have a go at riding the tandem! They coped pretty well considering we were heavily loaded!

So we find ourselves heading north up to Isfahan which we hope will take around 5 days on the bike. We might end up taking a bus from a town called Semirom.