So we had finally completed all our visa admin and now it was time to get back on the bike.

It felt strange, almost like we were starting a completely new trip. What with us being able to closely follow the political turmoil back home, catching up with lots of friends and family over Skype and not having to pack a pannier or sleep in a tent for two weeks it definitely felt weird to be getting back on the bike.

We desperately needed to drag ourselves back to a travelling mentality again so we said our goodbyes to Andrey and set off.

We were soon back in the cycle touring headspace thanks to our back tire which burst just as we were leaving the city. A very similar thing had happened in northern Myanmar – the tire﻿ just wears away at the wheel rim… Maybe not even the ‘bomb proof’ schwalbe tires can cope with our heavily loaded back wheel.

We were extremely fortunate that this happened just outside Bishkek because although we had a foldable spare with us it was now obvious that this was turning into a continuous problem for us.

Bishkek is probably one of the few places in the whole of Central Asia where we could easily get another schwalbe spare, in fact we knew of a guy called Nathan who runs a hostel especially for cycle tourers in the city and he keeps spare schwalbes for tourers in need!

We debate for a long time about how many we should buy from Nathan. We decide it’s a good idea to stock up while we have the chance so we buy two. Nathan only has the Marathon Plus type so we fold away our spare Marathon Mondial, get a new one on the back wheel and manage to strap the second spare to the back.

While fitting the new tire we ask Nathan if he knew of any easy way of helping the tyre ‘fit’ properly around the rim. Schwalbe tires have a useful reflective strip which acts as a parallel spacer and we think one reason for the first set of tyres failing was that the first time we fitted them they weren’t parallel ending up with the rim pinching the tyre in the wrong place.

After much stretching, pumping and deflating Nathan told us to lube the edge of the tire with washing up liquid while fitting it – it really works!

Back on the road out of Bishkek we still find it a little hard to get back into the cycling… It’s hot (very hot), our muscles have lost all their strength, and our bums have relapsed back to a ‘sitting watching football, drinking beer’ state.

From the side of the road a figure runs out from the shade of the trees and hails us down. We stop and shake hands with Ed, another cycle tourer from the UK who’s heading in the same direction as us.

If you think we’re slightly cooky cycling on a tandem, our set up is nothing to Ed’s. He is 18 months into a round the world trip and he’s doing it all on a unicycle.

At the age of 19 he set off from his home in Somerset to embark on this incredible journey. Having seen out the winter in Bishkek he is now back on the road heading towards China. He hopes to complete the journey in 3 years.

What’s most impressive is his average speed and distance covered each day which, are not too far off our own and because he only has one gear he’s much faster than us up the hills. We sped past him on the downs though. 🙂

Ed is a bit of a celebrity in the cycle touring world so it was great to meet him in person; plus watching him take off and speed down the road after a break never gets old. 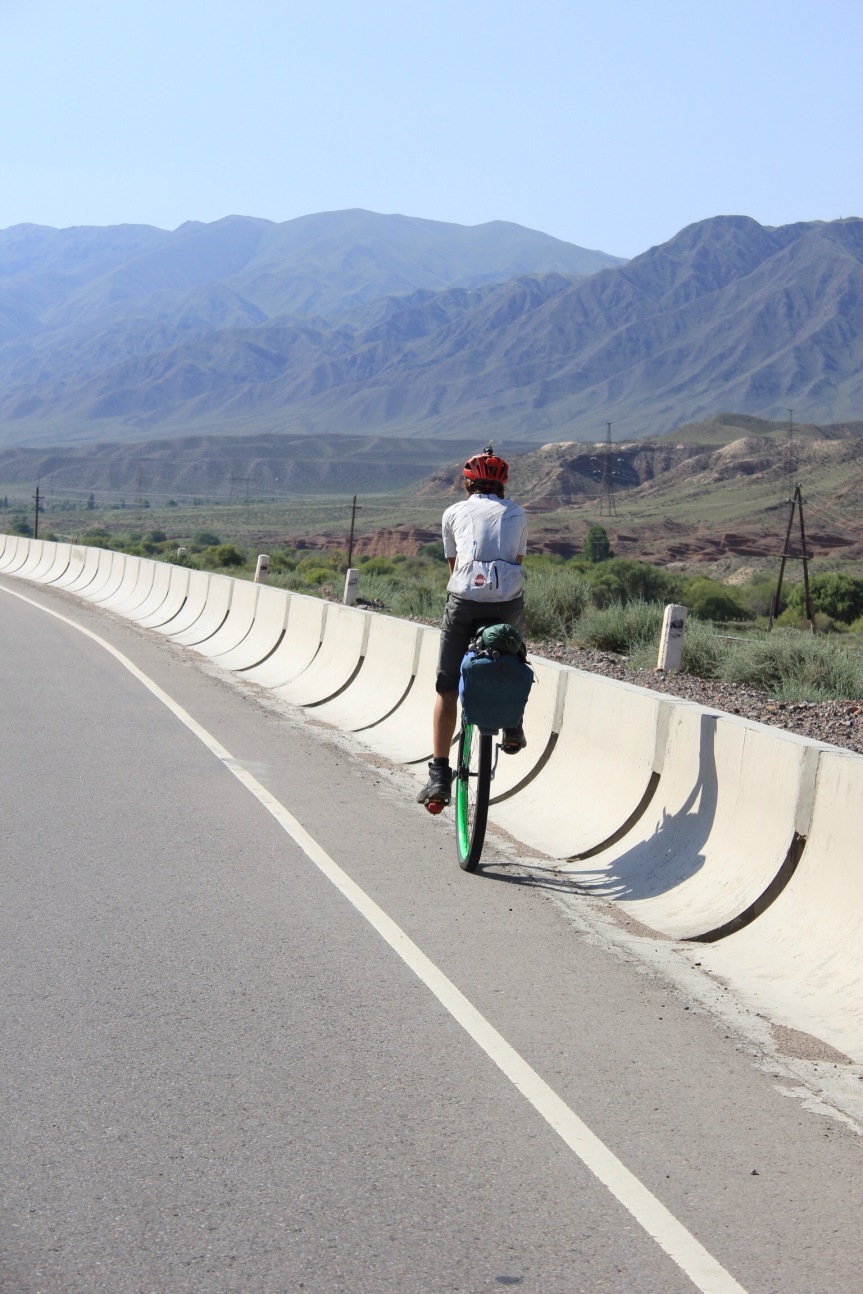 Ed is a very chilled and unassuming guy and it was great spending time with him.

We made some good camps with him and naturally the three of us were a slightly farcical sight while riding along. There can’t be many times you see three people cycling passed with only three wheels between them. 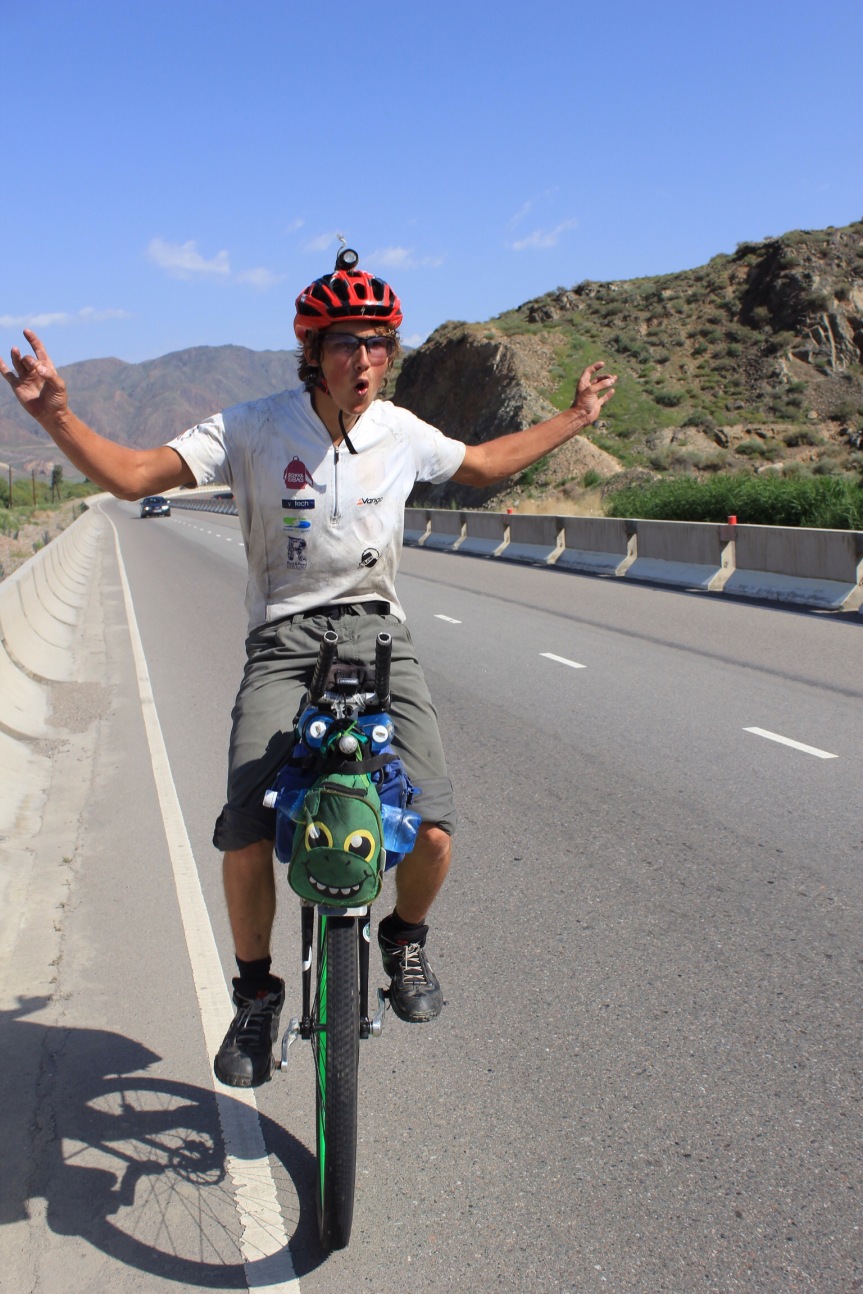 The three of us worked our way east towards Issyk Kul lake. At Kok-Moynok Bir we parted ways, Paddy and I turning south towards Kochkor while Ed carried east to Karakol where he’ll stop before heading towards the Kazakh border.

The cycle to Kochkor was on a good road but involved a hard climb through some very changeable weather, first baking sunshine and then hailing thunder storms. Near the top, I suddenly come over really feverish. My whole body aches and I can’t stop shaking, it’s a bit weird but we manage to reach the summit and Paddy helps me into my thermals before we freewheel down towards a suitable lunch stop overlooking Orto-Tokoy reservoir.

I collapse into a chair with a terrible headache and wait for the paracetamol and ibuprofen to kick in.

Once I’ve eaten and the drugs have worked some of their magic I feel a bit better and we manage to complete the last 20km to Kochkor where we check-in to the first hostel we find. I sleep for a good 13 hours and by morning feel ok again. Even so, we decide to take a rest day in Kochkor where normally there isn’t much to see, but by chance it was a Saturday which gave us the opportunity to wonder down to the weekly animal market. 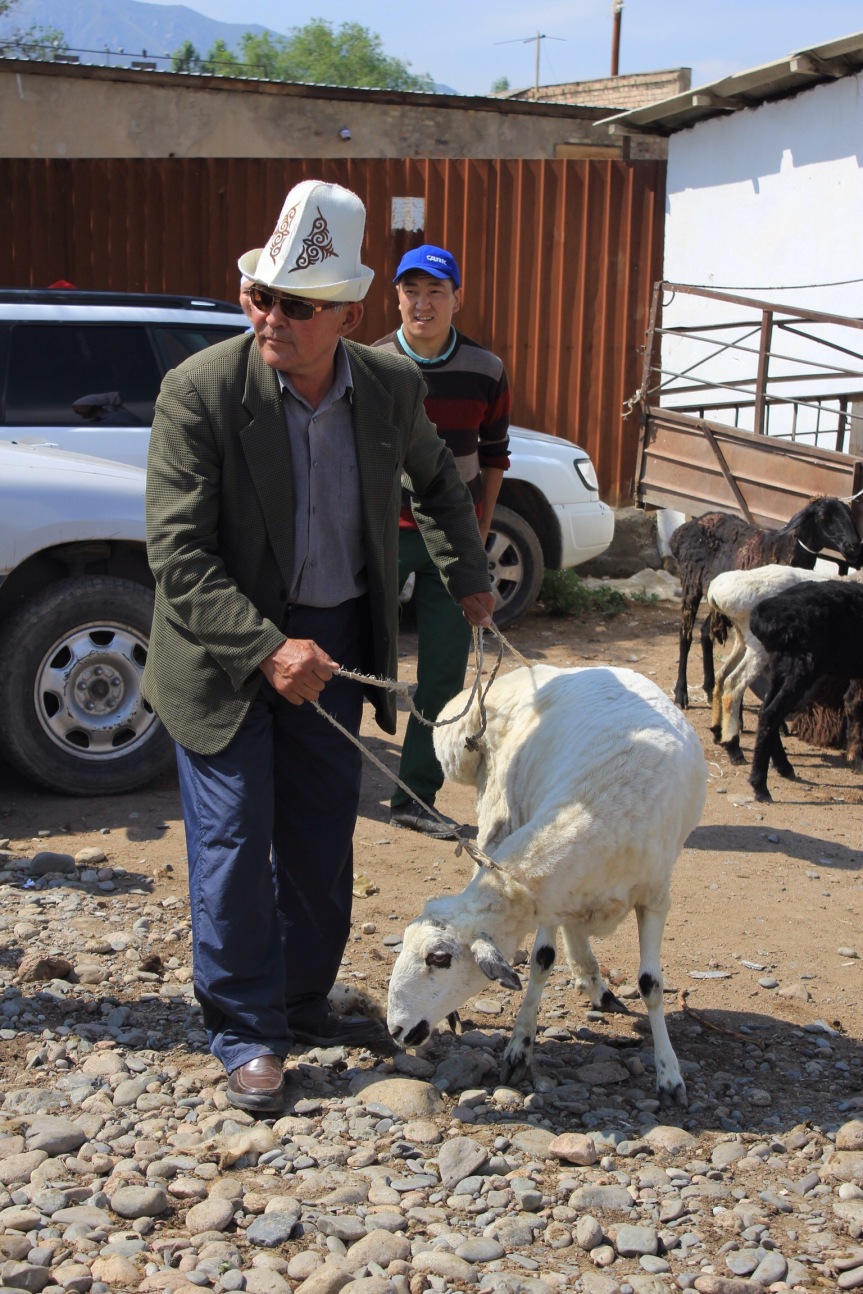 It was well worth the visit and it was fun watching the women and men dragging their new purchases across the yard towards their cars.

We met the biggest sheep we’ve ever seen – a woolly grey beast weighing 36kg who towered over the other sheep and liked carrying seven year old children on its back. 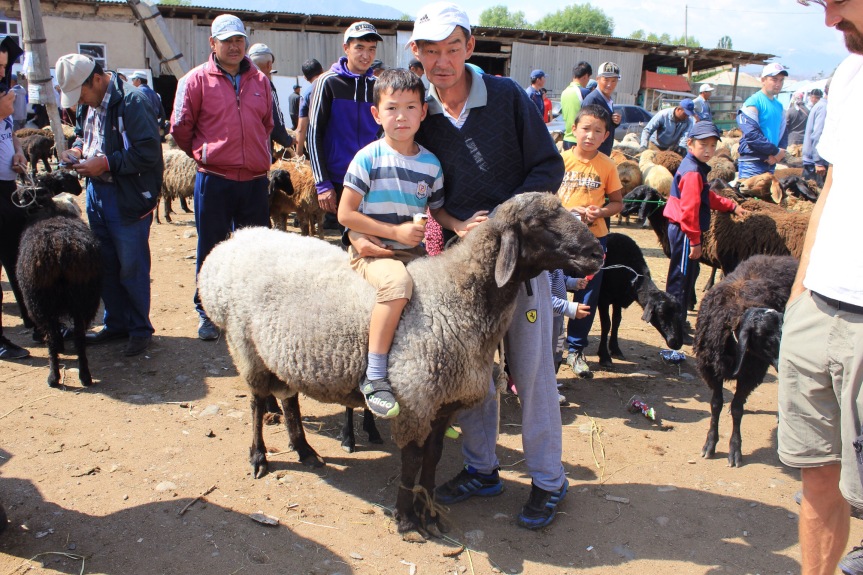 On our way out we spotted a group of guys loading three grown, albeit normal sized, sheep into the boot of their Lada car… Here they are closing it up.

I managed to walk away carrying a little creature too, this one was unintentional and even more unwelcome however.

When we get back to the hostel Paddy expertly removes it with tweezers and I watch it crawl around on top of our lunchbox lid for a while before stabbing it. I spend a long time merticulously combing my hair – an activity I haven’t done in about 4 months – and checking my body for any more.

Lucky we decided to have that tick borne encephalitis jab before we left!!