Kashgar was a nice place to relax before heading towards the Kyrgyzstan border.

Much of the historic old town (where many of the buildings were over 500 years old) has been torn down and replaced by new ‘replica’ buildings which although smart feel a bit empty of any character.

Kashgar was a central hub for the famous Silk Road and consequently has a very famous bazaar which we visited and had lunch at – a egg noodle and chickpea spicy salad with fresh bagel and homemade spicy chicken drumsticks. 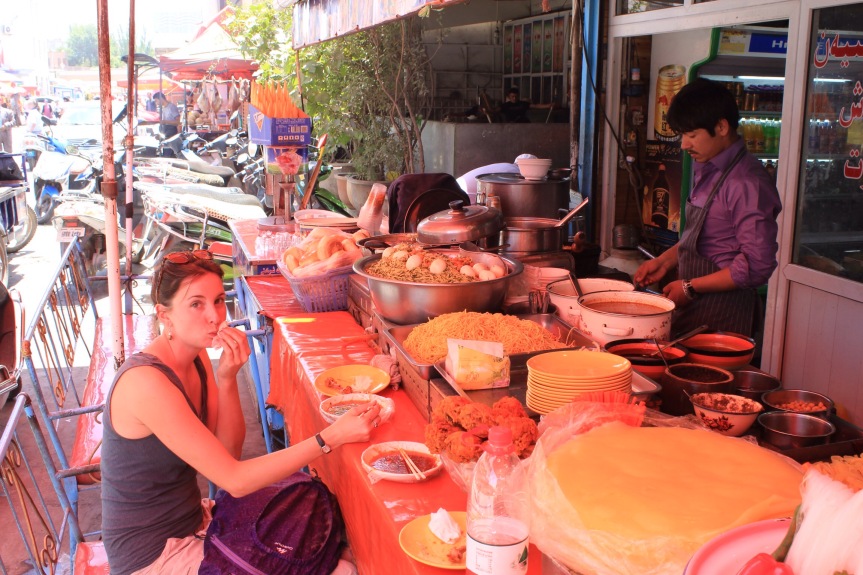 Despite it being a Tuesday it was still bustling and I even witnessed a raucous fist fight develop between two of the stall owners.

We also cycled out to the Abakh Hoja 17th century Mausoleum which is an interesting place to wonder about and is considered to be one of the holiest Islamic sites in the province. 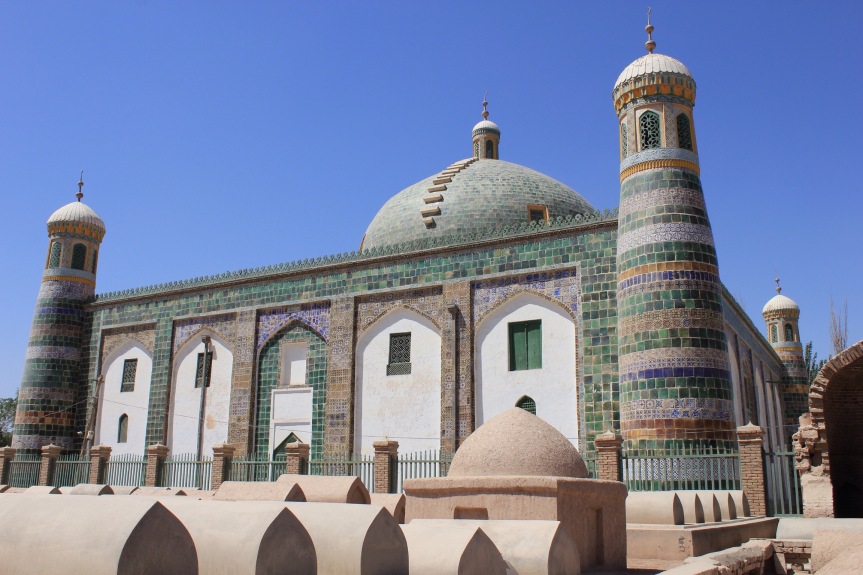 The complex consists of the domed mausoleum which, is decorated with mismatched blue and green tiles, and a number of mosques all built in the typical Uighur pairing, used for summer and winter respectively. 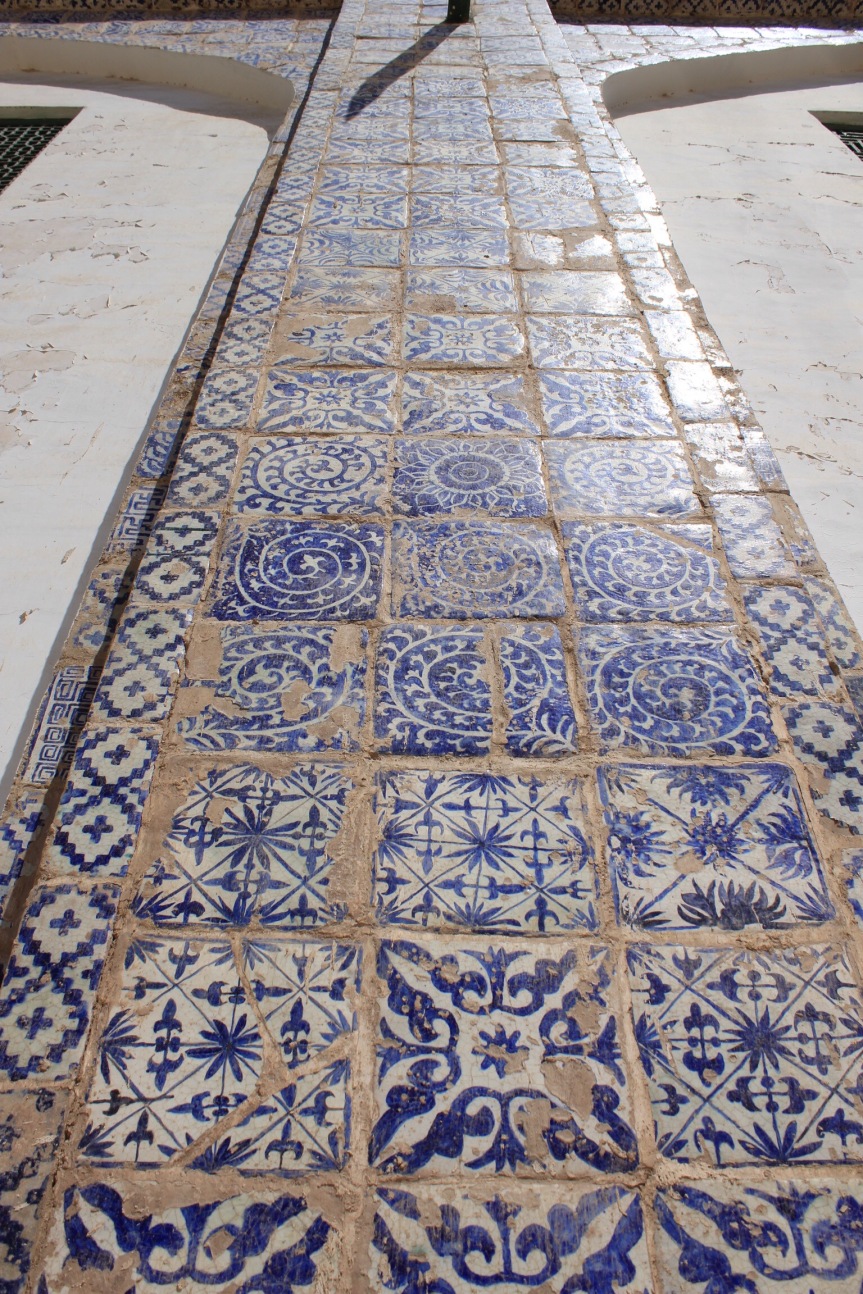 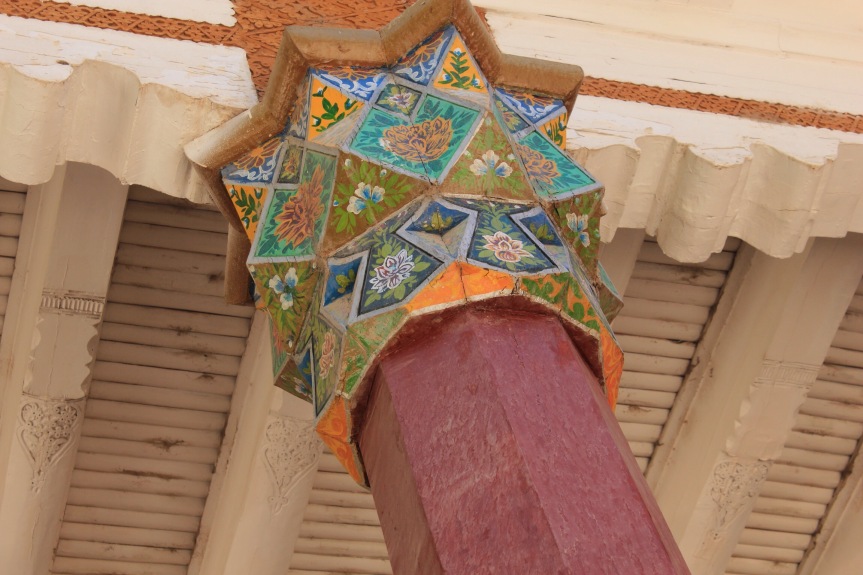 The whole place is surrounded by nice gardens planted with heavily scented roses, complete with an enormous shaggy camel… 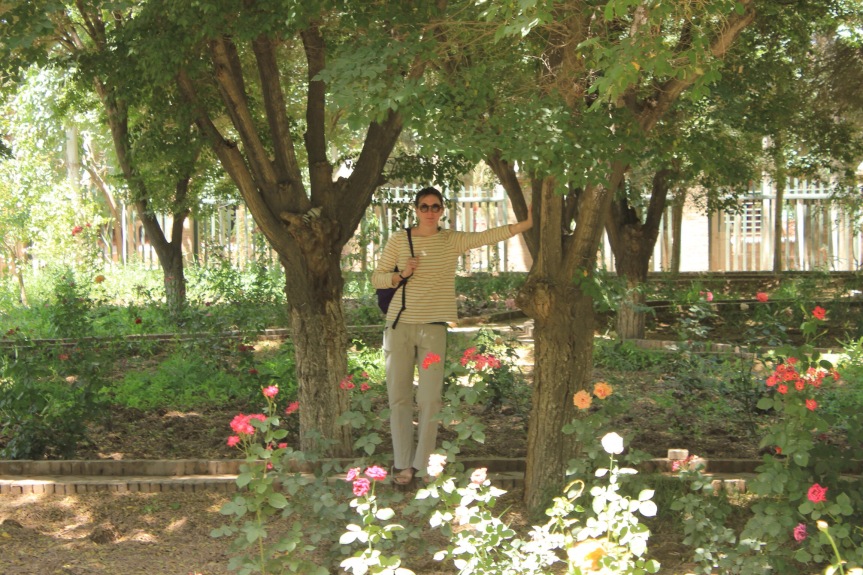 We also took a walk through the graveyard next to the complex.

Our hostel was a great big building with a large courtyard full of other travellers. There were a number of cycle tourers passing through, most of them Chinese, but Henry the Durham cathedral choral boy and music student at Edinburgh University rolled in one evening having just arrived from Kyrgyzstan. It was good to swap stories with him.

There was Connar the Irish man and his wife (both in their late 40s) from Australia who were enjoying a years career break travelling across Asia and finally Michelangelo from Barcelona, who liked to wear a very long black turban just for fun (he’s actually a Christian) and who makes his living by travelling to Pakistan and Afghanistan for 3 months of the year to export the blue gem stone Lapis lazuli.

We spent the rest of the day cleaning the bike and stocking up for our cycle through the desert up towards the Irkeshtam Pass which will see us cross the border into neighbouring Kyrgyzstan and eventually see us arrive in Osh.