It’s possible to cycle from Takeo to Phnom Penh in a day (81km) but there were a number of reasons why we chose to spread the distance over three days ride:

The N2 road which offers the most direct route isn’t the best road for cycle tourers. There’s no hard shoulder, its incredibly dusty in the dry season and the road is busy with trucks and and other heavy traffic. (At the time of writing – Jan 2016 – there are also major road construction works between Tonle Bati and the capital which adds to the dust and general unpleasantness)

Most importantly though there are four major sites of interest on the way – Phnom Chisaur, Phnom Tamau Zoological Park and Rescue Centre, Tonle Bati, and finally the Killing Fields at Choeung Ek. We wanted to hit them all and decided that Phnom Chisaur and Tonle Bati would be the best bets for camping. (Don’t be tempted to camp near the zoo, you will be no match for the semi-tame monkeys).

Taking all this into consideration we stocked up at the big market in Takeo, let some air out the tyres and headed directly north out of town along the windy roads through the lakes and canal network which run parallel with the N2. It was a great ride – a flat, quiet dirt track lined with spectacular lily covered lakes, friendly villages and plenty of shelter from the headwind. 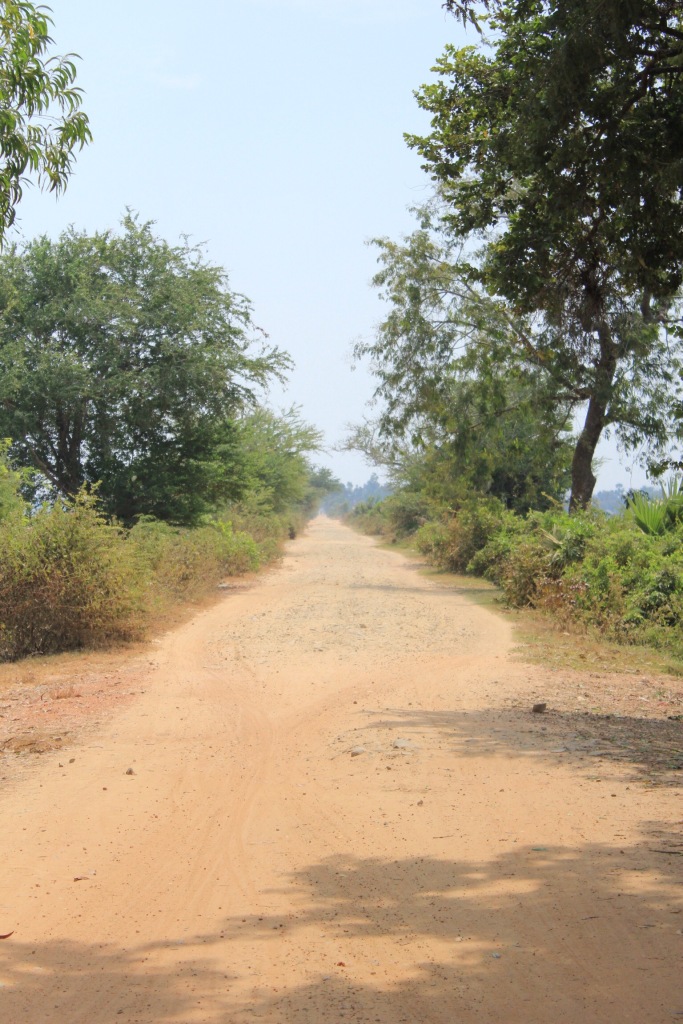 We stopped at this amazing setting for lunch along the way which gave us the opportunity to try out our Life Straw filter.

We reached Phnom Chisaur at 3.30 and headed straight for the 400+ steps which lead up to the temple at the top which boasts a sacred linga ($2 entry fee).

At the bottom of the steps there is a school surrounding a playing field and lake. We parked ourselves on the edge of the playing field and made some tea. Nobody took much notice so we agreed it would be ok to camp.

After more than a few days, Paddy’s back is still covered in red spots and I’ve had an erruption on my back and upper thighs now too. We have been super careful to cover up while stopped and have come to the conclusion that the problem isn’t ant or mozzie bites at all but rather an extreme case of heat rash. I’m contemplating throwing away my cycling top and stocking up on white baggy t-shirts instead but the padded lycra shorts pose more of a problem.

The next day we continued to head north towards the wildlife zoo. Some great more scenic tracks – this ‘road’ was barely more than a walking path between cropped rice fields. 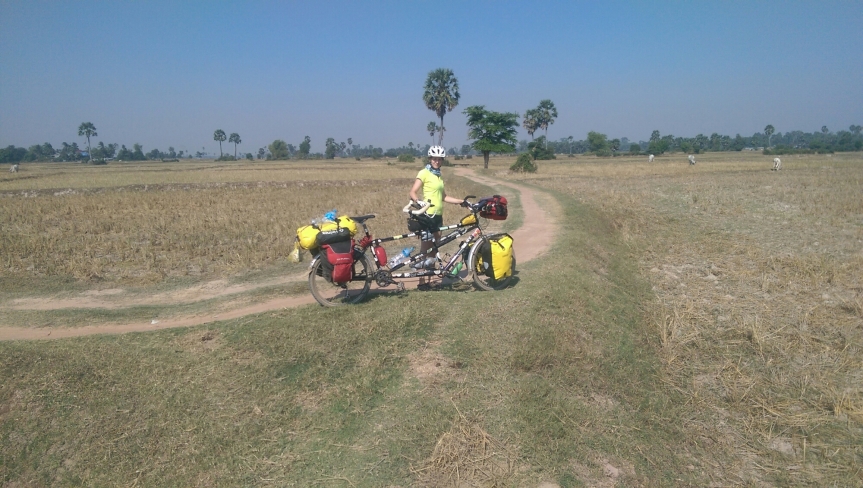 The landscape continues to be dominated by canals and irrigation systems. It’s hard to imagine what it must look like at the end of the rainy season, the grazing cattle gone, it covered with lush green.

We get to the zoo at around 11am and climb the steady incline to the entrance (you pass quite a big wat on the way). It’s very quiet and we continue to cycle another km through beautiful countryside before we reach the start of the enclosures. It feels incredibly remote but as we park we instantly get bombarded by sellers offering bananas and potatoes to feed to the animals. Very different from London Zoo!

We instantly felt uneasy about leaving all our stuff – we just got a feeling it could be a bit dodge. In the end we agreed to leave it parked and tipped one of the boys to look after the stuff – although it is possible and maybe advised to cycle around what is quite a long tour of the enclosures.

Despite its slightly run down feeling we were generally impressed by the size and scale of the enclosures. Most of the animals, many of whom have been rescued from much worse fates, have a good amount of space even if they’re not particularly entertained. You are very much left to your own devises as you make your way around. 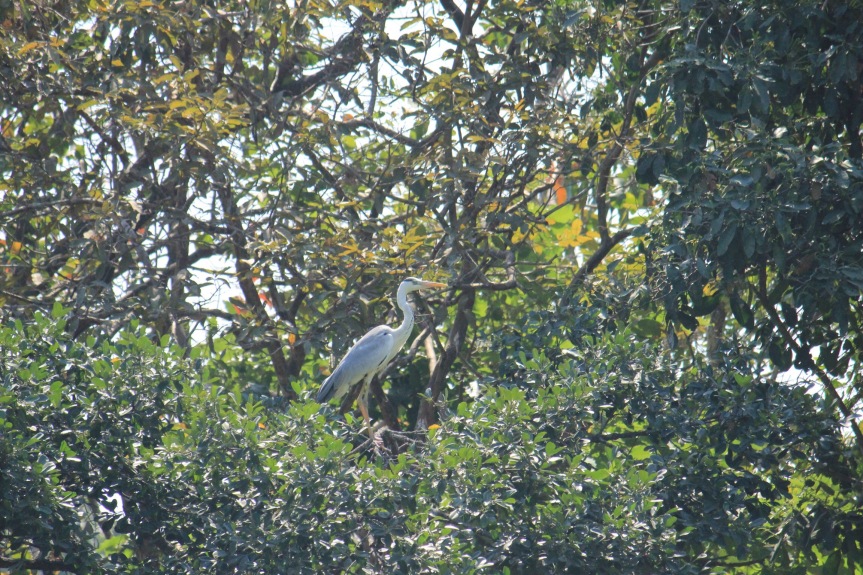 Tame monkeys rule over the whole site and follow you round expectantly. We enjoyed the crocs and had an exhilarating meeting with an agitated male tiger. Paddy also enjoyed the otters and spotted a very pregnant leopard. 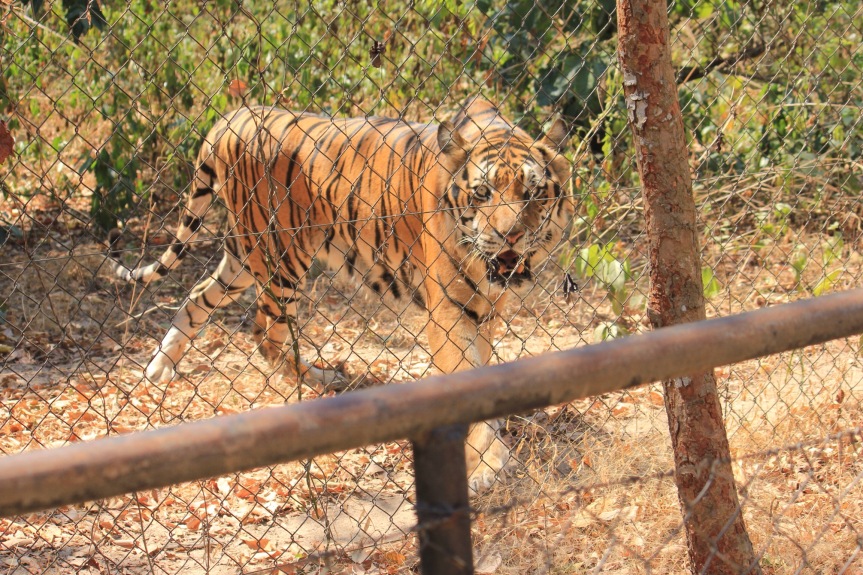 We cooked up lunch on the lake near the entrance – a group of cheeky monkeys approached and managed to steal out bananas. They ended up getting farely agessive and we had to use the helinox chairs as shields to scare them away long enough to eat our noodles! There’s no end to how useful those chairs have been.

Back on the road we head to Tonle Bati arriving for 4pm – we instantly head to one of the stilted picnic huts on the lake. Its here we discovered we had lost (or had stolen) both our foldable knife and our leatherman set. Both items we use every day.

At dusk we cycled into the modern temple complex opposite the Ta Prohm ruins and ask one of the monks if they would allow us to camp.

We pitched with the sun going down on these.

Our food bag got completely attacked AGAIN by black ants in the night. They bit through the black bin liner and proceeded to tear holes in the top of the Altura bag (we wonder if they’d get through our ortlieb bags?).

Ants have been our biggest problem so far so if anyone has any good solutions to tackle this ongoing problem please get in touch!

A quick stop at the Angkorian Ta Prohm ruins were well worth it – the carvings are amazing! 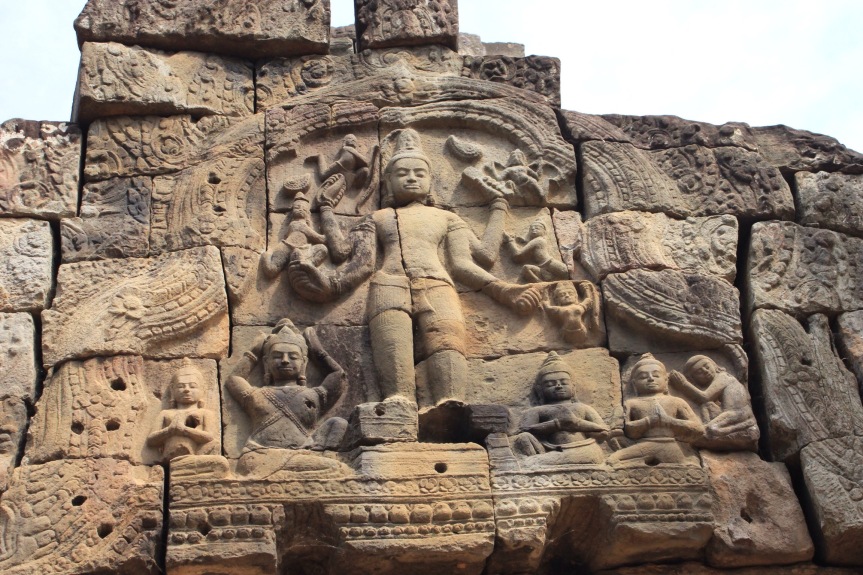 On to the mass grave site of Choeung Ek which is situated on the edge of the city. The site (1 of many) marks where thousands of Cambodians were systematically murdered and buried during the Khmer Rouge regime in the 1970s. There are no words to describe it; you must visit but be prepared.

The last 10km into the city were easy – we followed the same tuk tuk right into the centre.