It was time to dive into Iran’s ancient Persian history and where better to start than Persopolis, the ancient city of the Achaemenid empire which sits north east of Shiraz. We would take a bus from Yazd, spend a night camping next to the ruins and spend the next afternoon cycling the remaining 60km to Shiraz after visiting the site.

From the very beginning, Persopolis was intended to be a ‘showcase city’ to illustrate and flaunt the wealth, power and artistic superiority of the Achaemenid empire.

Construction started in 520 BC under Darius I and added to over the next 150 years by his son Xersus and other subsequent rulers. It’s worth pointing out that Britain was still stuck in the Iron Age with the Celtic people building their ditch and bank forts at this point and the great Roman buildings such as the coliseum wouldn’t be built for another 550 years.

It’s also worth noting that unlike many of the great Greek structures which were being built at around the same time (e.g. Acropolis of Athens) Persopolis was built, not by slaves, but by paid labourers and artisans, a testament to the humility and egalitarian approach adopted by Persia’s rulers.

The geographical location is significant – it sat at the centre of the empire which, at its height, encompassed Afghanistan and Pakistan and stretched all the way west to parts of present day Greece, and south to Ethiopia.
Historians believe the city which, sits elevated on a towering 12m stone platform, was used for an important annual gathering on No Ruz (Persian new year) when subjects from across the empire would travel to pay tribute to their King.

The city was taken, looted and later burned by Alexander the Great in 330BC and then for 2000 years much of it lay beneath large dunes of sand and dust which helped to preserve what was left. Archaeological excavations started in the late 1800s.

Even though there is little left of the sparkling city there’s enough to spark your imagination.

A majestic double staircase leads up to the city complex and then a walkway takes you through a towering doorway called the Gate of All Nations which is flanked by giant winged bull creatures. 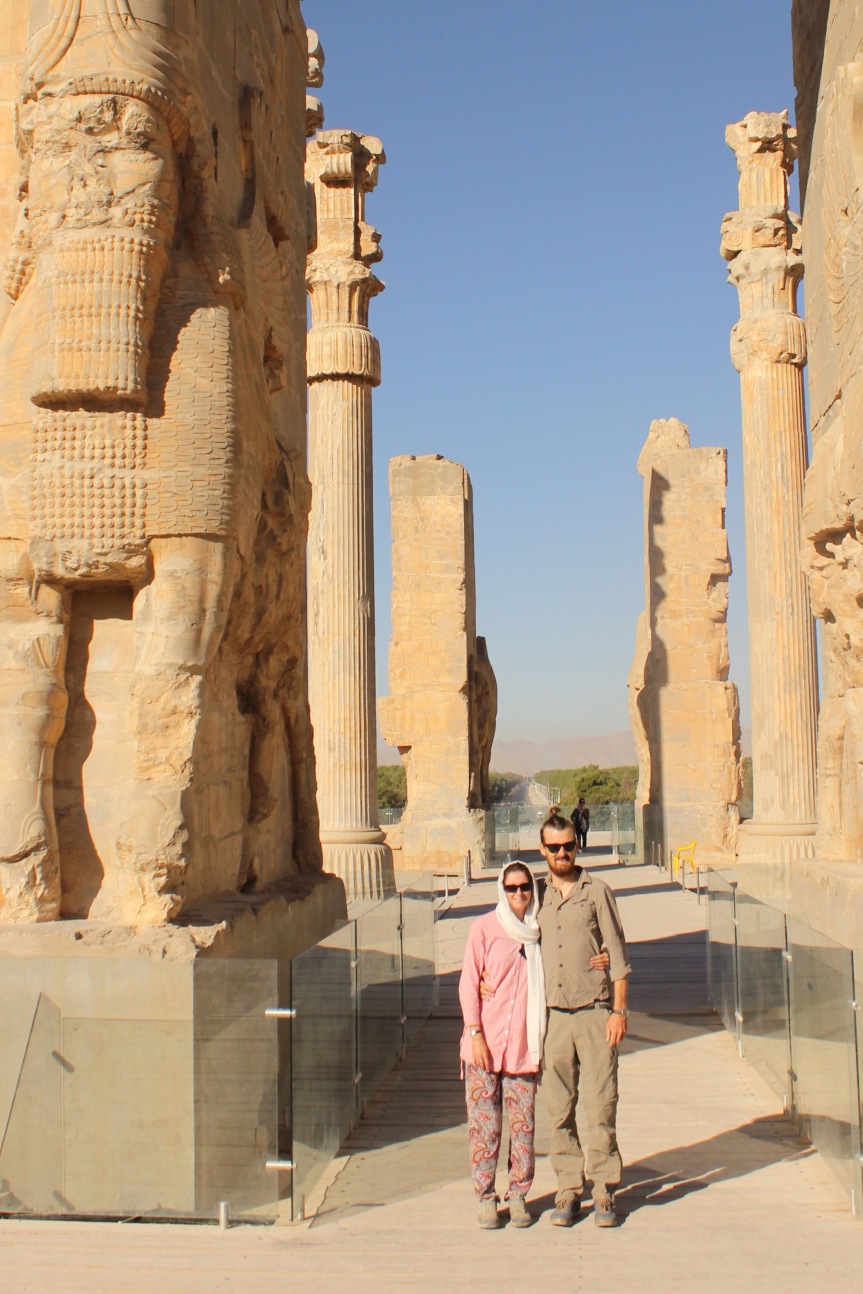 There are some amazing bas-relief sculptures decorating the Apadana palace and staircase. They depict the delegations from the Empire’s various provinces arriving at the city gates baring gifts of cloth, livestock, pottery and furniture.

The Palace of 100 Columns and the Tripylon are pretty awe inspiring mainly due to the height and number of stone columns which make up the structures. These would have been vast halls with towering ceilings and polished stone walls but historians argue over their exact use and purpose.

It was possible to climb up the hill to the tombs of Atraxerxes II and III which offered amazing panoramic views of the site.

It was a great morning and because we had camped so near the site we were among the first in at 8am, missing the worst of both the crowds and the heat.

After a hurried lunch of Falafel rolls and Zam Zam cola (which we later realised we never paid for!!!) we got ready to cycle to Shiraz. Our exit was delayed due to lots of people wanting to pose for photos with the tandem.

It was great to be back on the bike – our first proper cycle in Iran – but it was during the hottest part of the day and I was still getting used to wearing full hejab and a headscarf under my helmet. It was incredibly uncomfortable cycling up the hills!!

We arrived at 5ish and the white sprawling city of Shiraz which, sits at the bottom of a vast valley, appeared before us. Flanking our road into the city was a lovely pedestrianised boulevard, a waterfall tumbling down the rock face behind.

We lingered for a while soaking up the atmosphere. That day happened to be a national holiday so there were lots of locals milling about, having picnics (a favourite pastime in Shiraz we are told).

Along the terraced walkways a number of free-runners were practising their moves. This one guy (who could clamour up the whole complex in about 20 seconds) climbed up this vertical surface and then polished his set off with a headstand on the edge of the highest wall…

We’d have three nights in Shiraz staying with a couple of warm showers hosts before cycling north to Esfahan.