Day 1: 42.5km
We didn’t leave Huang’s house until ten to four so gave ourselves just 40km to cover. We planned to meet the Nu Jiang river and follow it to find Lujiang (Xiaopingtian) where we would find a hotel. The Nu Jiang is the first of two big rivers (the other being the Mekong) we’ll be following over the next 5 days.

It’s a warm afternoon and we cycle down some amazing valleys which are covered in tiered farms which almost act like contour lines, making the landscape seem even more impressive than it is already.

We make good progress but then are forced to wait for 45mins as there has been a landslide and they are only letting traffic through every hour. The road is pretty bad in places too. This meant we couldn’t reach Lujiang before dark but we luckily did find a hotel 14km before Lujiang on the road side near the bridge just after the road meets the river.

Day 2: 97.5km
Today saw us have a late start as our gears had been jumping the day before on the hills. While I hunt for breakfast Paddy spends time tweaking the derailer to see if this would get rid of the problem. Once we get going we follow the river proper which carves its way through an amazing valley.

On the other side of the river we spot a collection of around 150 sandy brick, one room cottages very neatly built in rows. It’s a weird looking place and looks pretty derelict. We wonder whether this was one of the agricultural communes which were built during the Cultural Revolution when the communist party forced thousands of people into the countryside to work the land…

The land is intensely farmed the whole way along the river and we wonder if we will be able to find a camping spot. 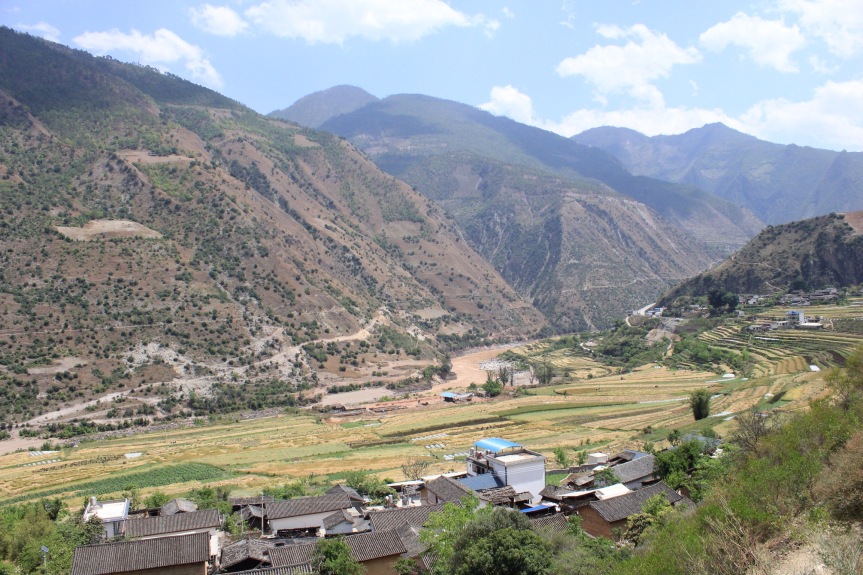 The road is good, but fairly up and down (AV 18.8km/ph), and we make up the time completing just over 5 hours actually on the bike.

At dusk we find a track which leads down to the bank of the river. We set up camp and try not to get too much sand in the tent.

Day 3: 75.1km
Paddy is a little grumpy in the morning as he discovers he stepped in dog poop the night before… At least we’re near a river! The view manages to cheer him up pretty well though. 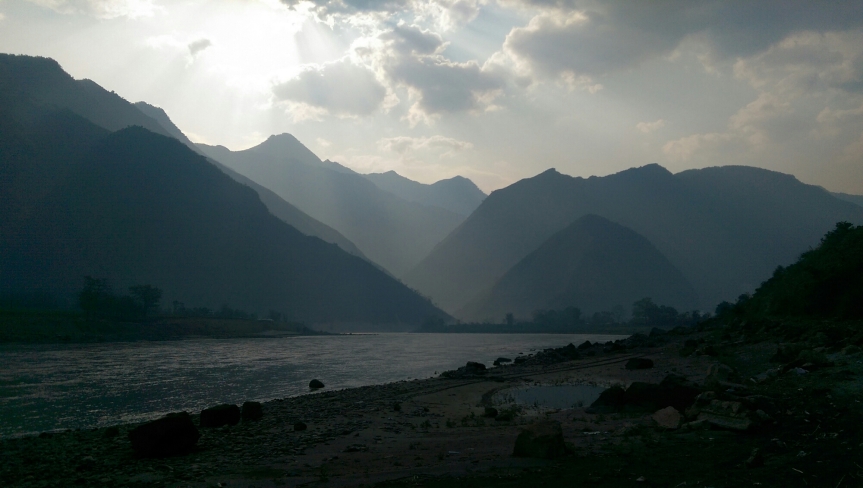 Onwards from our beautiful camping spot to Laowo.

The gears are still jumping which is driving us both crazy so we are forced to take an hour of the morning by the roadside. I had noticed that our smallest chainring had warped slightly and while tweaking Paddy notices that our chain link has bent out of shape. We replace the chain link, bend the chain link next to it back into shape and we are in business. No more jumping!

We experience our first proper tunnel! What is to become the first of many in China. 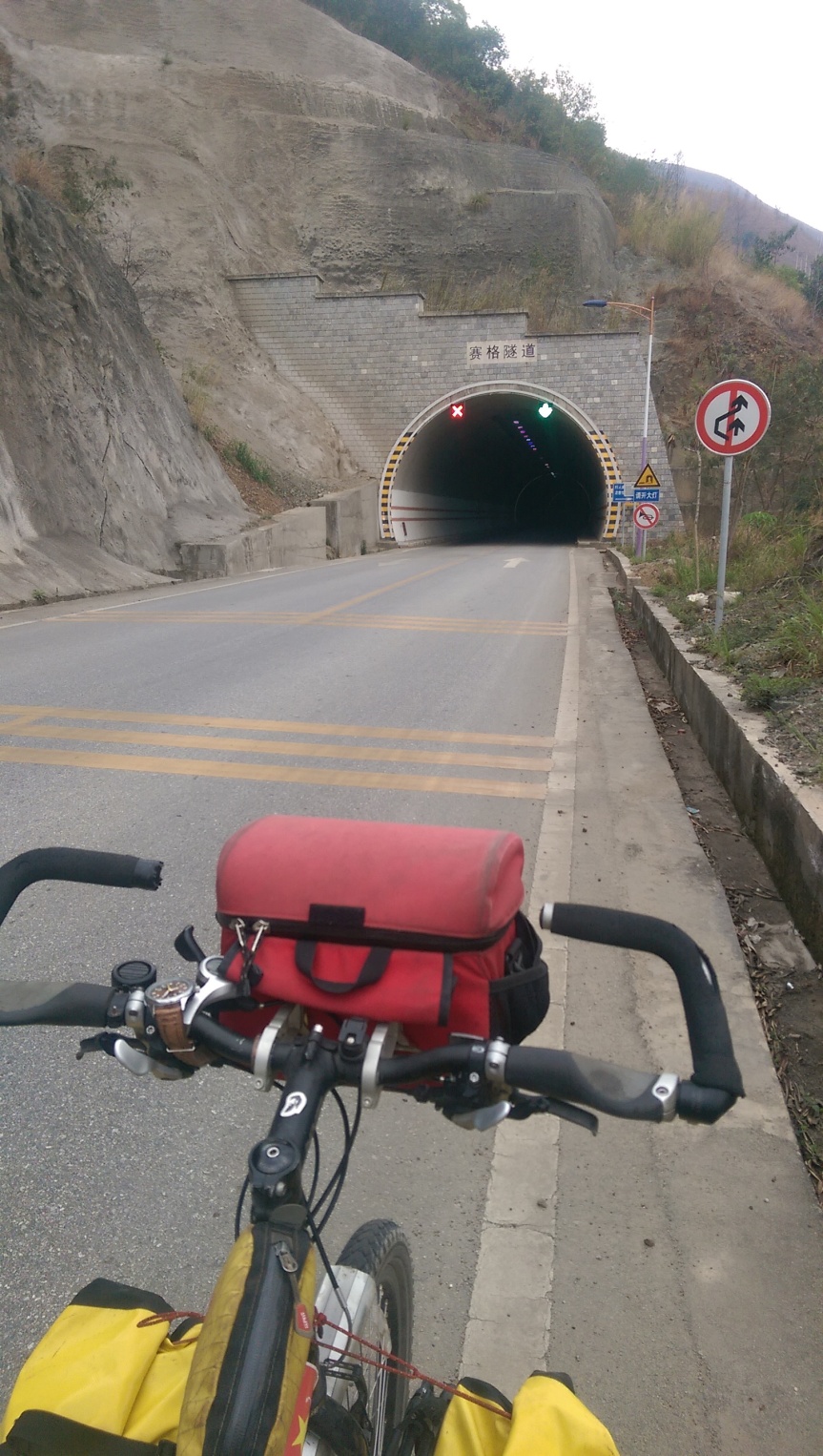 We are also stopped at another checkpoint and our details are carefully recorded in an online system.

We stop for a delicious meal which is a super rich beef stew cooked with lots of mint. There is so much meat and it is super delicious but we end up paying 60Y for it – this is a third of our daily budget!

A slightly surreal thing happens in the afternoon during a snack stop. We’re sitting on a wall, the only people around, enjoying an orange when 5 cops turn up. They take positions on the road and start stopping the traffic, clearly checking for licenses. One motorbike fails to stop so one of the cops starts comically running after it his hat falling to the ground and as it speeds away, he grabs his pistol and fires three shots into the air!

At Liuku we leave the Nu Jiang to start our climb which will eventually find us meeting up with the Mekong River. Liuku is a large town, a slightly surreal place. Lots of sky scrapers and flats crunched in together between the river and the towering mountains behind. 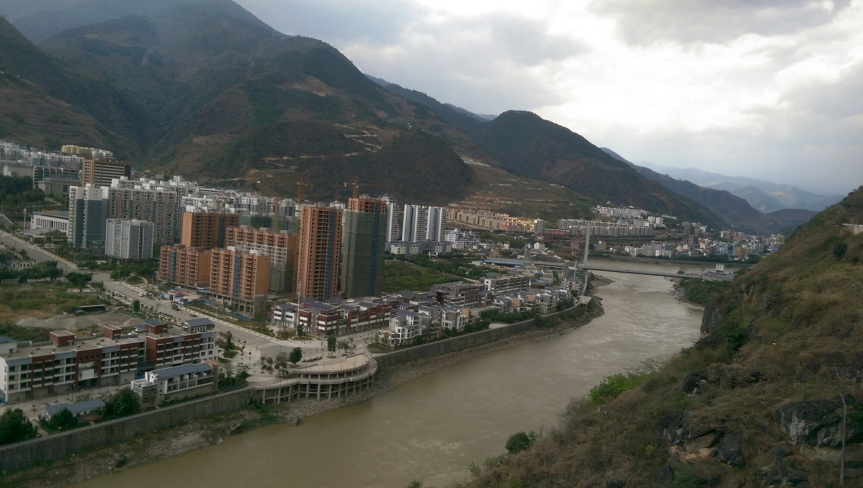 Just after Liuku we pass another army checkpoint where thorough searches of luggage are being done and everyone has to hand in their ID cards to be scanned. Our bags aren’t searched, but we get lots of questions and our passport details are again put into the online system. Our profiles clearly appear on the screen as the guards asks us where was the last place we were stopped. The guards are friendly but a couple of them are holding automatic machine guns and the whole experience is very surreal and intimidating. I can’t help thinking of Orwells 1984.

The cycle up to Laowo is a lovely end to the day and when we reach the small town it’s obvious we’re the first foreigners who have passed through in a while.

There is only one hotel in Laowo which we find after asking for directions.

The nights are beginning to get much colder as we get higher and we’re glad of our warm blankets. Tomorrow will see us climb to just over 2800m and then drop down again to meet the Mekong.

Day 4: 79km
After a bowl of steaming Dou Fen this time with churos (sounds like a weird combination I know but it’s very nice) we start the climb through the valley.

We weren’t planning to do such a long day what with the climb as well but there isn’t a hotel until a place called Biaocun (20km up the Mekong) so we end up completing an 80km day.

The climb to the top is Spectacular, SPECTACULAR! Quiet road and the best views and countryside we have seen on the trip. The first section takes you up through a valley where you follow a bumbling stream up river to the village where the two roads meet (where, for reference, there is a great restaurant which is also a hotel). This section is a little steep in places but very manageable.

We then turned left and started climbing up the mountain pass. Great road, easy incline with breathtaking views. This is why we came away! It really is amazing. Also there is no downward sections, just climbing, and we just hope the other side is a pure descent too.

We reach the top after 27.9km and 5:45 hours (3:39 actually on the bike). We average at 7.6km/ph! The top is marked with all these Tibetan prayer flags blowing in the wind. Its the highest we’ve been and we feel proud we’ve managed it.

We wrap up for the long decent which will take us down to the Mekong. The last time we saw this river was in Phnom Penh, Cambodia – we’ve done nearly 3000km since then.

We finally reach Biaocun which is a beautiful rural town on the river with farms running through the middle. The town has three sections, upper town, lower town and the section across the bridge. After cycling around a lot we discover that the hotels are all in the lower town.

At the hotel the woman has no idea what to do with our passports and keeps brandishing her own ID card at us. We try to explain that our passports are our IDs. She calls her husband who also seems pretty baffled by all the stamps and visas. After a while they obviously agree to abandon the idea of registering us and hand over the key.

Our final day takes us along the Mekong towards the town of Ying Pang.

The road is very up and down and we pass two hydro electric dams. There are a number of tunnels and all the heavy traffic leading to and from the dams means that the road isn’t in great shape for a lot of sections.

Here I am enjoying the view. 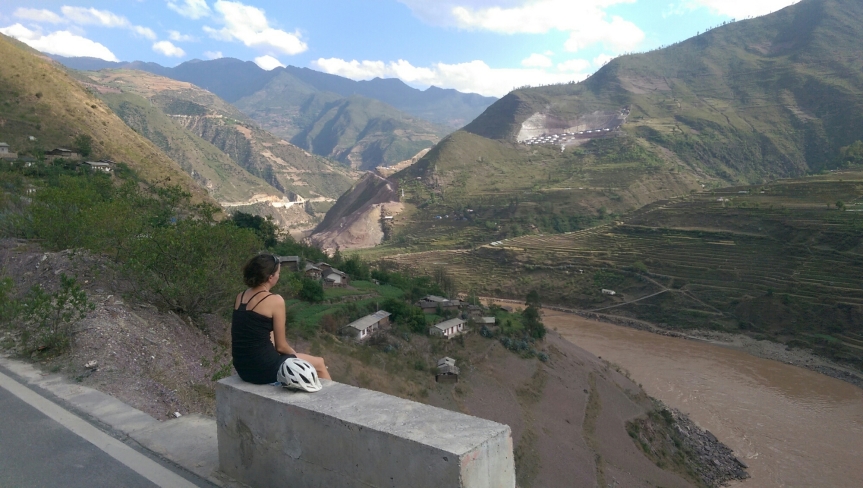 There is a big steep climb up to Ying Pang town which has spectacular views across the valley.

Ying Pang has lots of hotels so don’t go for the first one you come to. This is the view we enjoyed from our window and we paid 50Y. 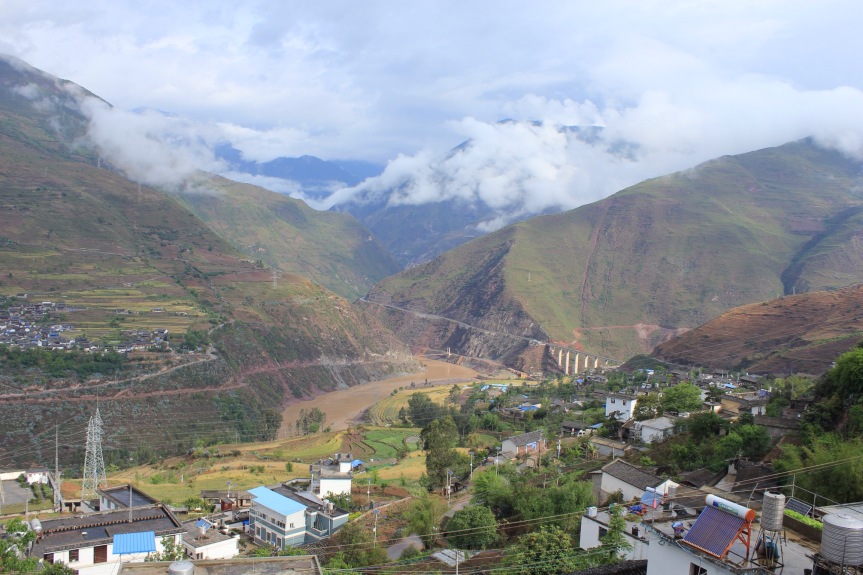 After a great streetfood dinner in the centre of town we hit the hay. Tomorrow will see us do another high climb as we leave the Mekong behind us.