Festival going has always been a big part of our summer holidaying and with news from friends back home of their 2016 festival plans, we admit, we were feeling a little nostalgic. We were really glad therefore to have made it to our own little Kyrgyz mountain festival. 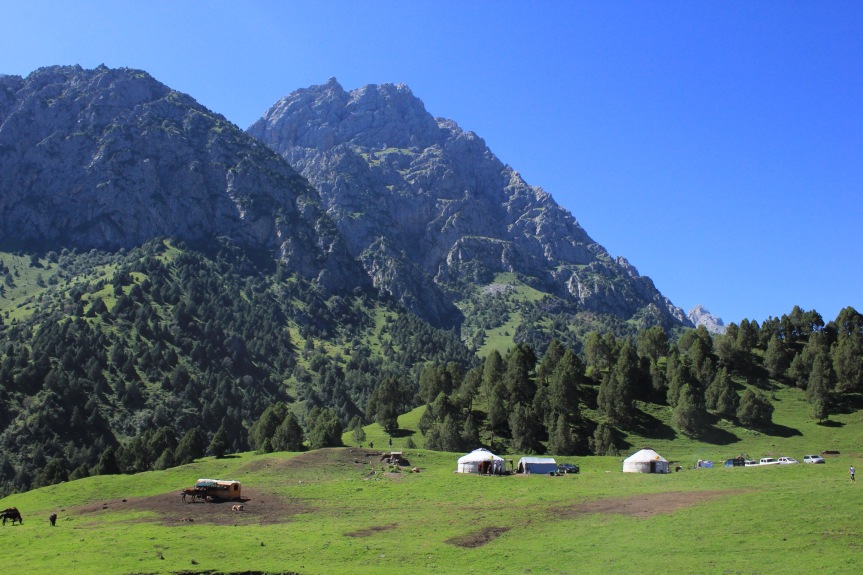 After a cold night, we wake to find the sun beating down on our tent. We lie there for a while comfortably listening to the sounds of people bustling past us, children laughing and food being prepared – in the background we recognise the familiar low hum of a generator.

Crawling out of our tent we find children running around in traditional costumes under a cloudless sky and adults blowing up balloons to decorate some temporary red tents which have appeared on the edge of the field.

The backdrop is spectacular and we cook breakfast before getting ready to enjoy the day’s events which promised to include live performances, yurt building and traditional horse games.

Paddy’s hopes for a beer tent were soon dashed but in all other respects it seemed we had found our very own ‘party in a field’.

By 10pm lots of locals had started to arrive by both horse and car.
Having gone back to fetch the sunscreen from the tent I find Paddy sitting cross legged on a large traditional shashlik rug surrounded by 7 or 8 local women. He’s encouraged to hold each of their children in turn. 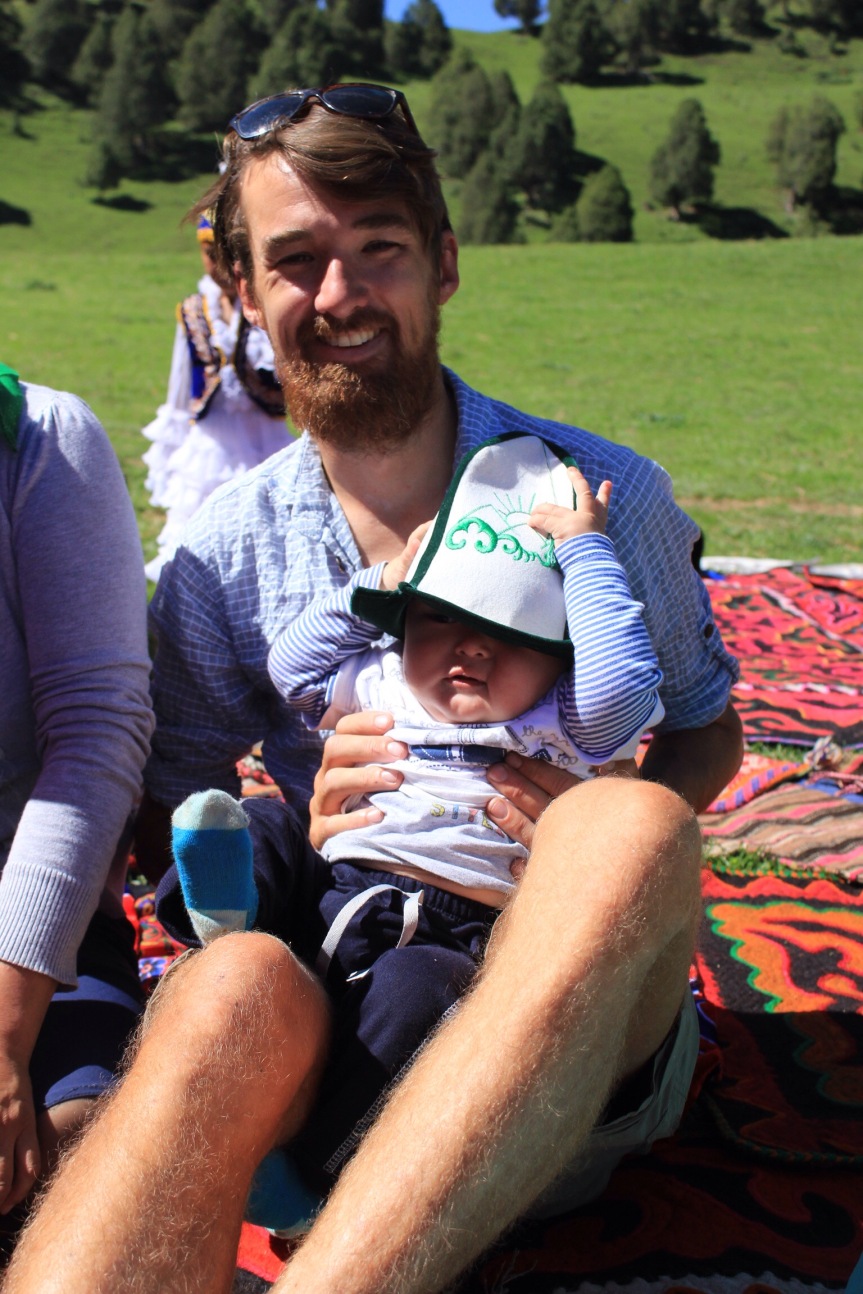 The Belgian guys who we had met the previous night were also there and at about 11am a large party of other tourists from Osh also arrived. The majority of people there were locals though. 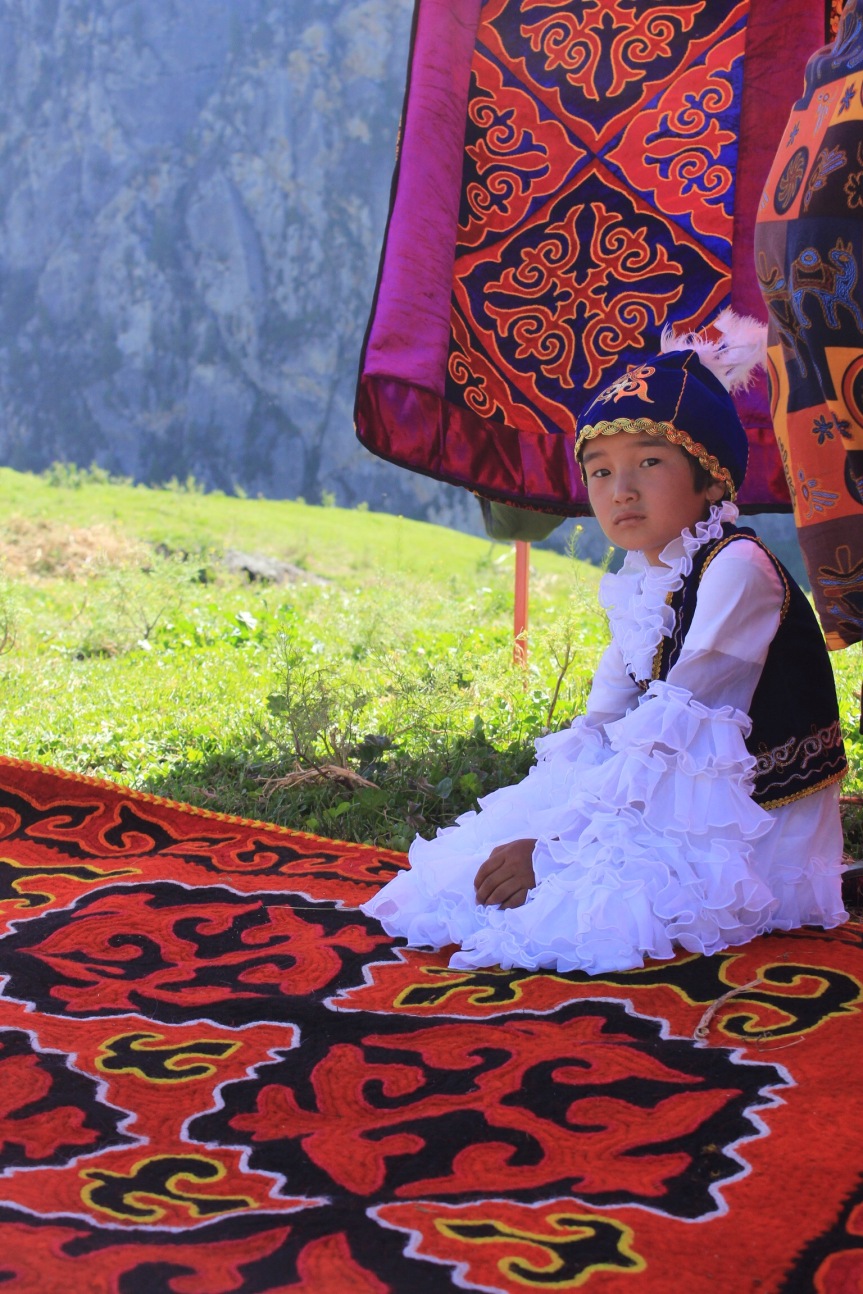 After a few opening speeches the festival kicks off in earnest with a couple of dance performances by local girls all proudly wearing their traditional outfits.

Next a mixed gender professional music group led by a Manasachi who performs excerpts of the famous Manas epoch.

After the performances we are all told to turn around to face the mountain behind where a bizzare staging of what the announcer calls ‘the traditional nomad movement’ is taking place.
This involved around 40 people processing across the grassy slopes down towards a semi-constructed yurt. Many of them are on horseback while others are leading heavily laden donkeys and yaks. There is also a camel – who, in the middle of the procession, spooked by something, causes havoc by running back up the mountain leaving a trail of objects in its wake.

The yurt building that followed was great fun however and it was interesting to see how the whole thing is constructed. Paddy has sworn he is going to build one when we get back home.

Once the wooden trellis walls are up the roof goes up by attaching about 60 curved beams to the circular tunduk which acts as the kind of ‘key stone’ to the whole structure.

The shape of the tunduk is represented in the Kyrgyz flag. 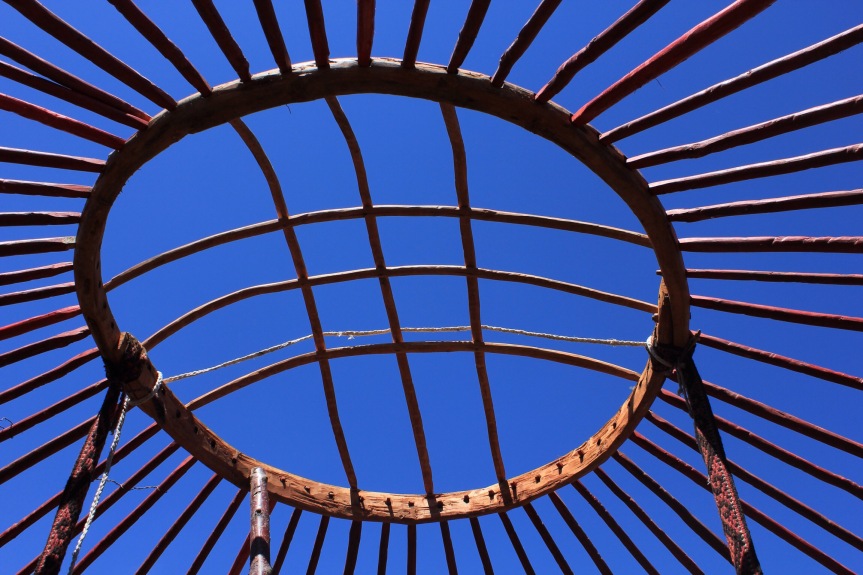 Once the wooden beams are tied together with rope and long belts of brightly coloured felt ribbon, the thick, sheep’s wool covers get wrapped around the exterior – first the walls and then the roof. Long ropes keep it all in place. 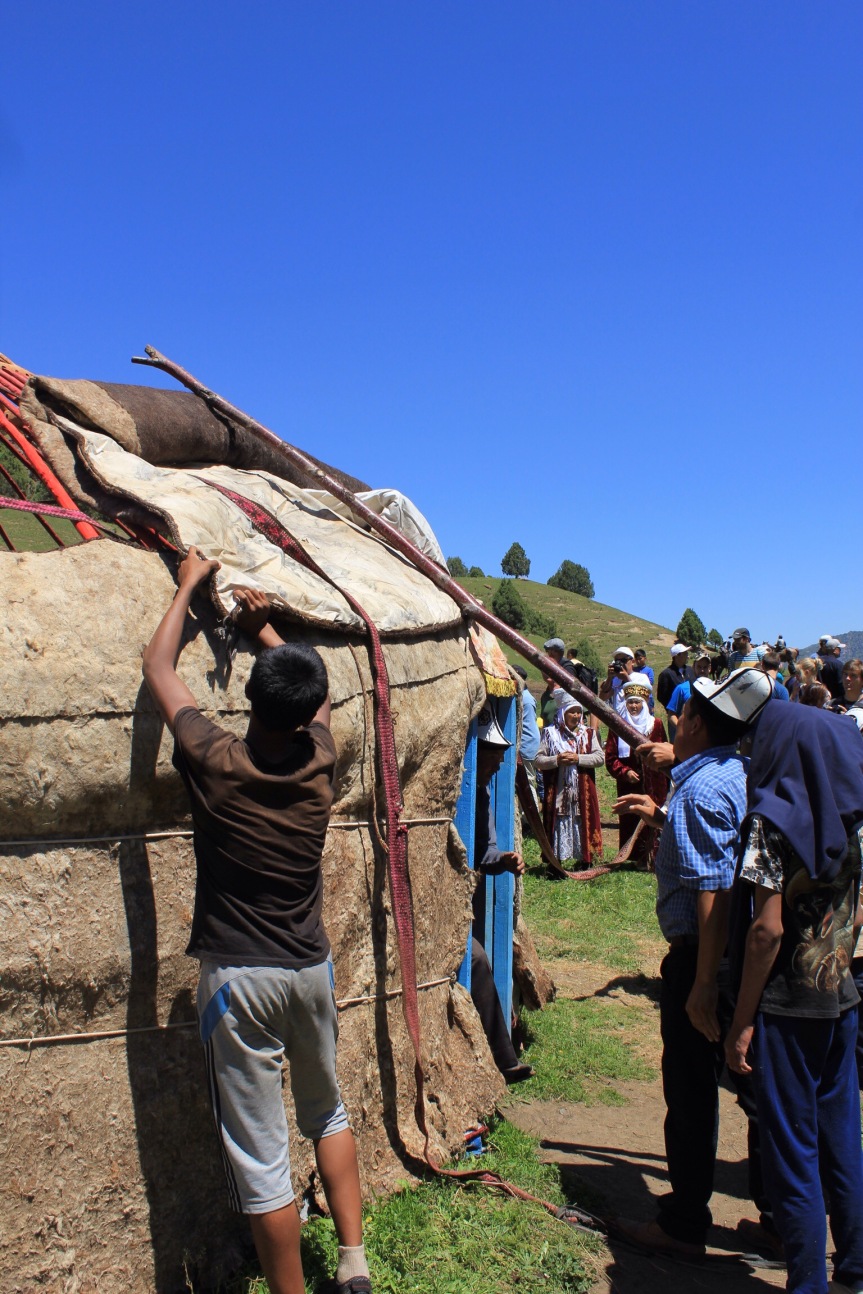 A team of six to eight skilled men can erect one of these things in around 60-90 minutes. 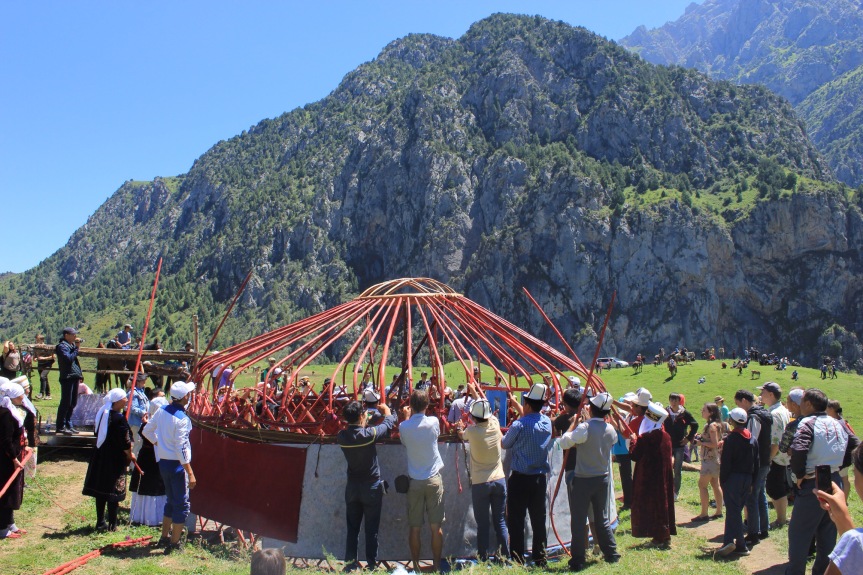 After a spectacular lunch we’re back in the field ready for the games to start. The first is a good ol’ fashion session of ‘rope pulling’ or as we know it – ‘tug of war’.

We tourists are asked if we’d like to form a team against some locals. Paddy gets involved in the men’s team and I have a go in the woman’s round.

Despite our best efforts we both find ourselves on the losing side – perhaps this says something about our scrawny build! I think we should stick to long distant cycling…

After the rope pulling each village nominates a man to represent them in a one on one tournament called yak pulling. Sadly the game doesn’t involve a yak. Instead the two men – attached by a rope pulled through their legs and around their necks – slowly crawl forwards attempting to pull their opponent over the centre line. Not surprisingly, none of the international guests were willing to put themselves forward for this game…

After yak pulling we were treated to a short stint of horseback wrestling followed by ‘coin picking’ where each opponent has a go at bending down from their horse to pick up as many coins from the ground as they can. They do this while the horse is cantering at top speed; it’s pretty crazy! 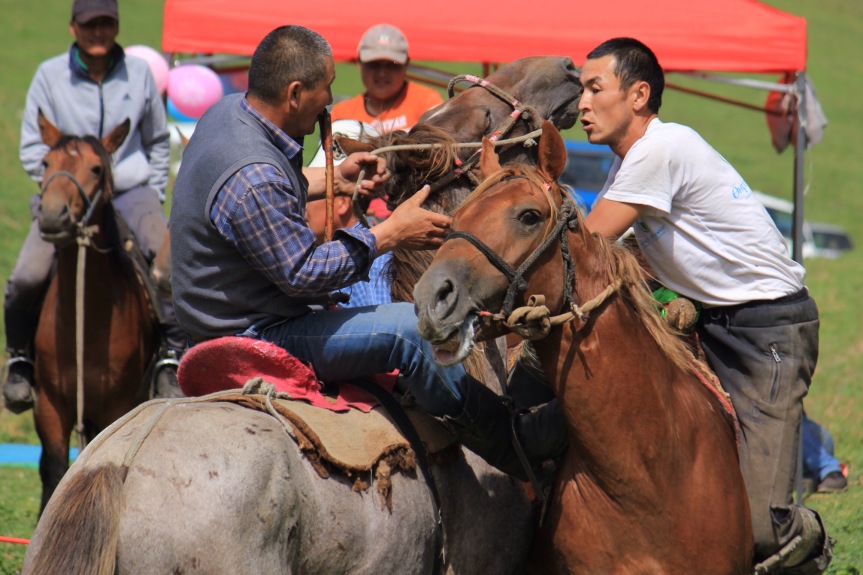 Nora our Dutch friend who is travelling across Asia on her motorcycle bravely took a turn at the coin picking. Unfortunately she didn’t manage to get any but she was pretty close and we were all very impressed with her brave attempt.

The day finished with the exhilarating traditional field game of Ulak Tartysh. The only way I can describe Ulak is by comparing it to a game of rugby union. But all the men are on horses and instead of playing with a ball they play with the beheaded carcass of a goat instead!

The aim of the game is to either pick up the carcass from the ground or wrestle it from your opponent before riding full pelt towards your goal ring, where the animal is dropped, earning a point for you team.

As you can imagine, it’s carnage, BUT incredibly entertaining to watch!

The weather stayed warm and dry the whole day and all in all, it was a very fitting end to our time in Kyrgyzstan.

It’s now time to head south, up and over the Tajik mountains. The Pamirs await!