We are sitting here waiting for a train out of Bangkok, so I thought I’d take the time to write a note on some of our repairs and improvements that have happened in the last week. The most significant is a new set of Andra 30 ‘bomb proof’ wheel rims.

On a day off 2 weeks ago I went to fix a small buckle in the back wheel and realised it was caused by a cracked rim. 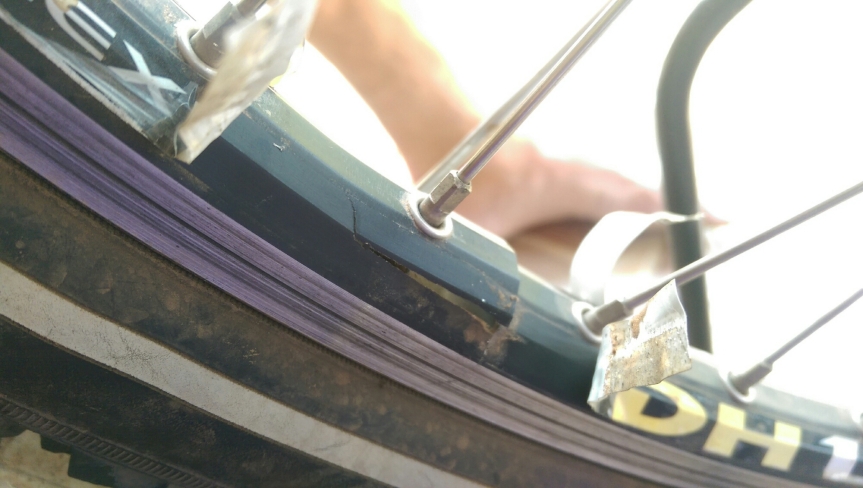 There is a LOT of load on the back wheel and it probably cracked on one of the bumps along the way. It wasn’t an immediate disaster as the crack wasn’t down the side wall and therefore wouldn’t cause the rim to collapse – it meant basically the associated spoke was doing nothing (the internet is great for all this!). So I marked the crack and we continued on checking it as we travelled. It was fine for 5 days until Bangkok and I suspect it might have been cracked for a good while before…

We needed a new back rim.

First port of call was JD tandems who sold us the bike, Ruth was extremely helpful and fast on email answering all my questions – thanks! Eventually the Andra 30 rims were the obvious choice, not cheap, but the best hardcore touring rims around from a Kiwi company.

After weighing the risk versus cost we decided to replace the front rim also and each wheel needed 48 spokes plus spares. To round things out the braking surface on the rims is tungsten carbide finished and requires special ultra hard brake pads. The pads are a fancy bright blue colour and look really slick, which is nice. The idea is the rims are so hard they will not erode during braking and will never need replacing. 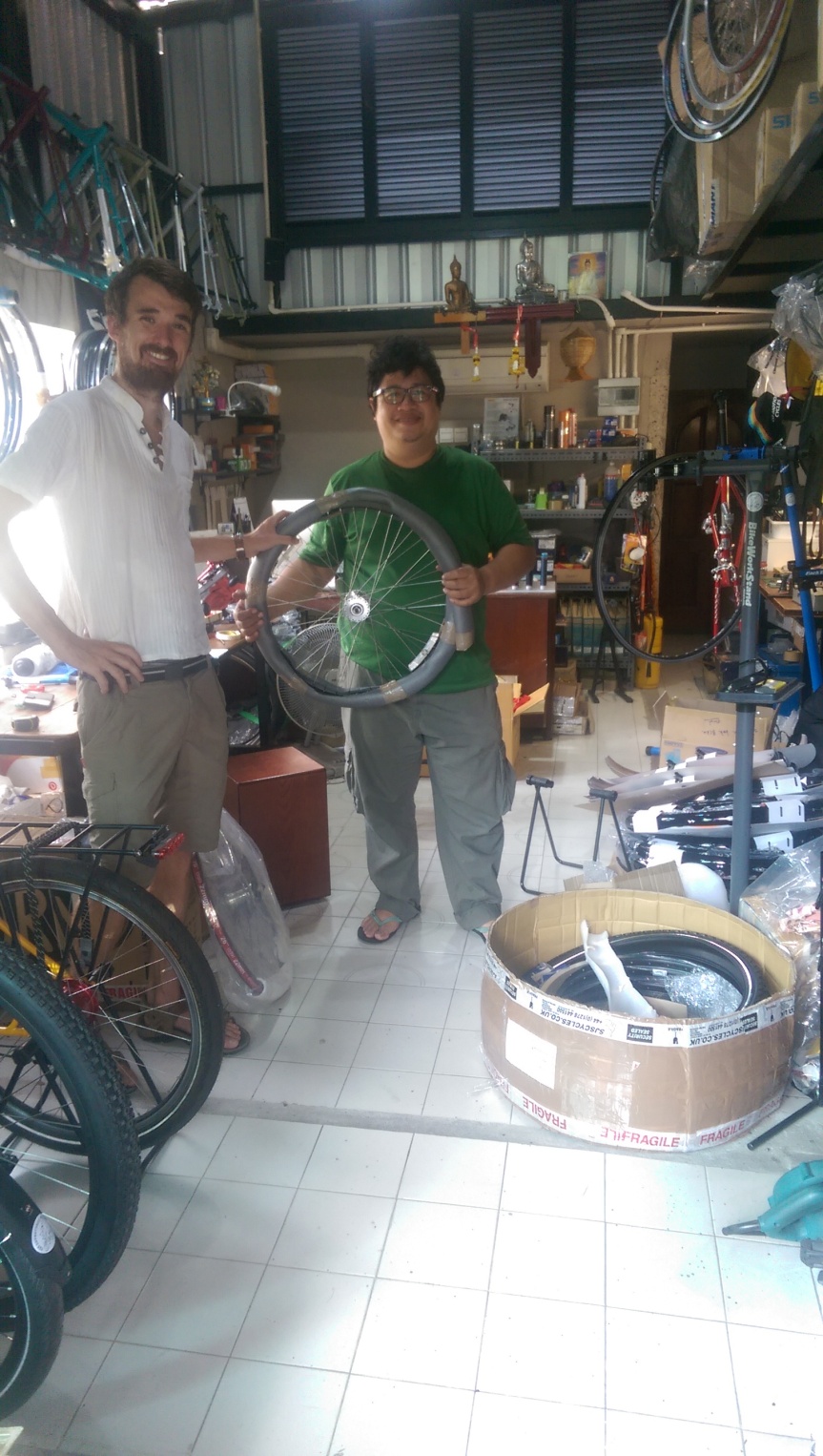 All the work was coordinated by Ma at BOK BOK BIKES, if you are touring through Thailand these are the guys to call. Every other bike shop didn’t know where to start with 48 spike wheels and one of them said ‘just call BOK BOK’. Ma’s brother did the wheel building at KANGAROO BIKES (near Bearing, last stop south on the sky train). They are dealers for Rholoff, Thorn, Surly, CoMotion and the workshop is stacked out with more top end tools than I’ve seen in any London shop. They were quick on email and got the work done on time so we could leave for Myanmar on schedule, including importing the rims through customs. Thanks guys! 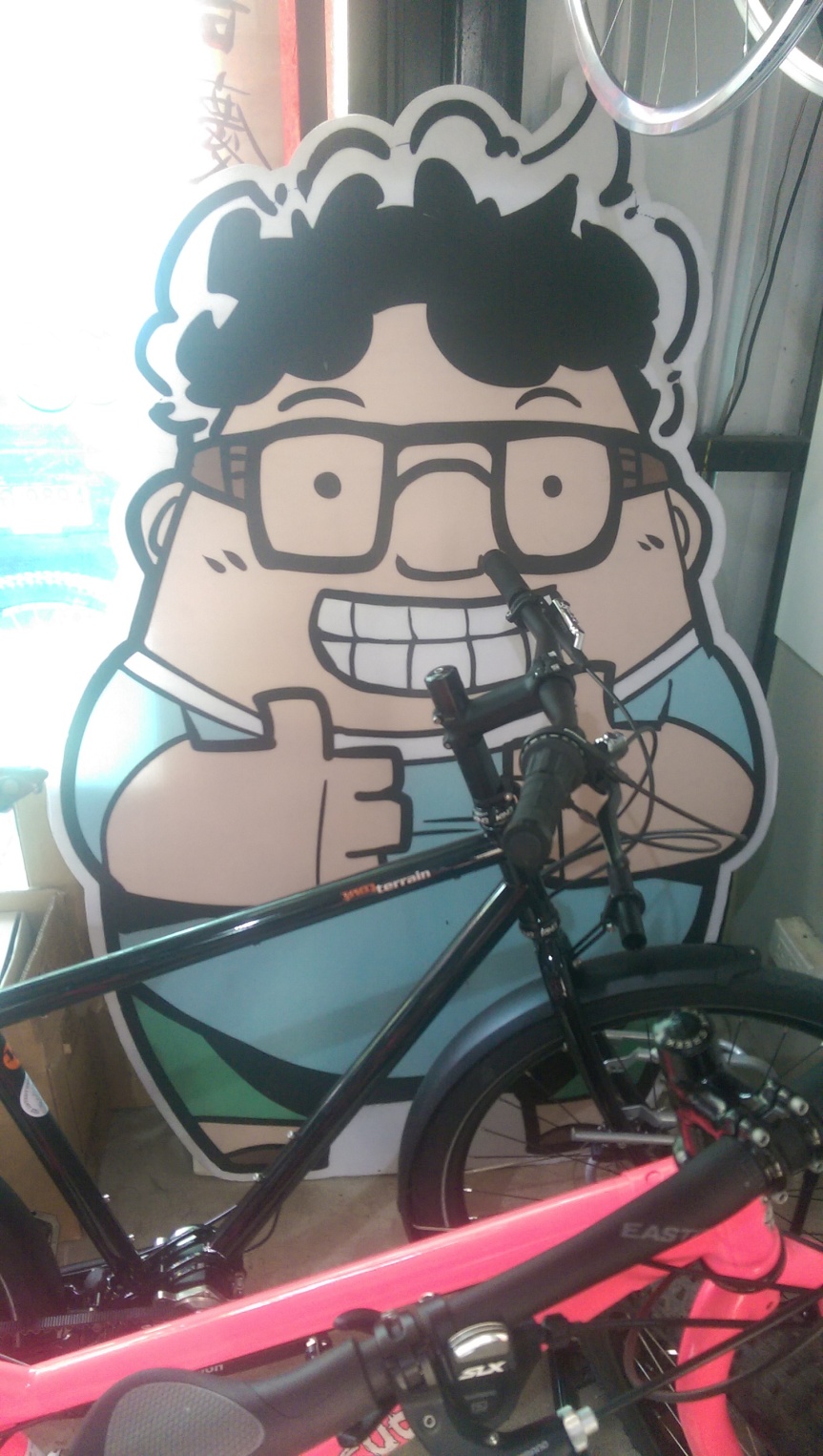 We also took delivery of a spare tyre, after debating whether one was needed and deciding against it in London. In the end I couldn’t sleep thinking about that, so we’ve gone safety first and got one sent over in our ‘bike care package’ from Bren in New York. It is a foldable Schwalbe Marathon Mondial. He also sent spare tandem length gear cables and end caps and other small bits n pieces.

One upgrade Bren sent which we’ve been craving is our new kickstand. It is a Pletcher type that cleverly has two legs that fold to one side. No more leaning the bike on trees, posts, fences or one of us having to stand holding it like a lemon.

Finally we got a little Irish and Welsh flag!!!

We are both exhausted as we were up late last night putting the new wheels on. In the process we popped two inner tubes… Annie effected tube replacement and puncture repair expertly. 🙂 We were also hogging the Wi-Fi ordering more spares, downloading maps, books, guides, booking accommodation, route planning… Back on the road proper tomorrow.