It took us a day to cross the flat plain. Our map showed two routes to Montenegro and we opted for what we thought would be the quieter road. It also promised to be a spectacular climb up through the Ragova canyon and we spotted that we would be able to make a quick detour to visit Visoki Decani – one of the ancient Serbian monasteries now guarded by UN peace keepers.

It was a warm day with the midday temperatures working their way up to 25 degrees. Cycle touring is so much better when it’s sunny and warm; where there is no need for the incessant layering and de-layering of clothes all day.

The monastery was interesting but we couldn’t take any photos due to the armed presence there. We didn’t linger, just a quick look at the famed 13th century frescos and a brief chat with the Italian guards at the gate before heading back along the road to scout out a camp spot. Here we cook up fajitas before settling down to sleep in our chosen spot – next to an old stone ruin in a roadside field.

The climb would take us the majority of the day – 25km of climbing – but just as we reach the start of the climb we spot a tourist information centre and decide to stop and use their bathroom. We get chatting to the attendant who tells us that in fact our intended route has no official border crossing and the road is now unused on the Montenegrin side. The open border is a further 20km up the road over a longer, steeper pass… We’re told its a beautiful cycle however and that we could play ignorant if we happen to meet anyone official on the other side. 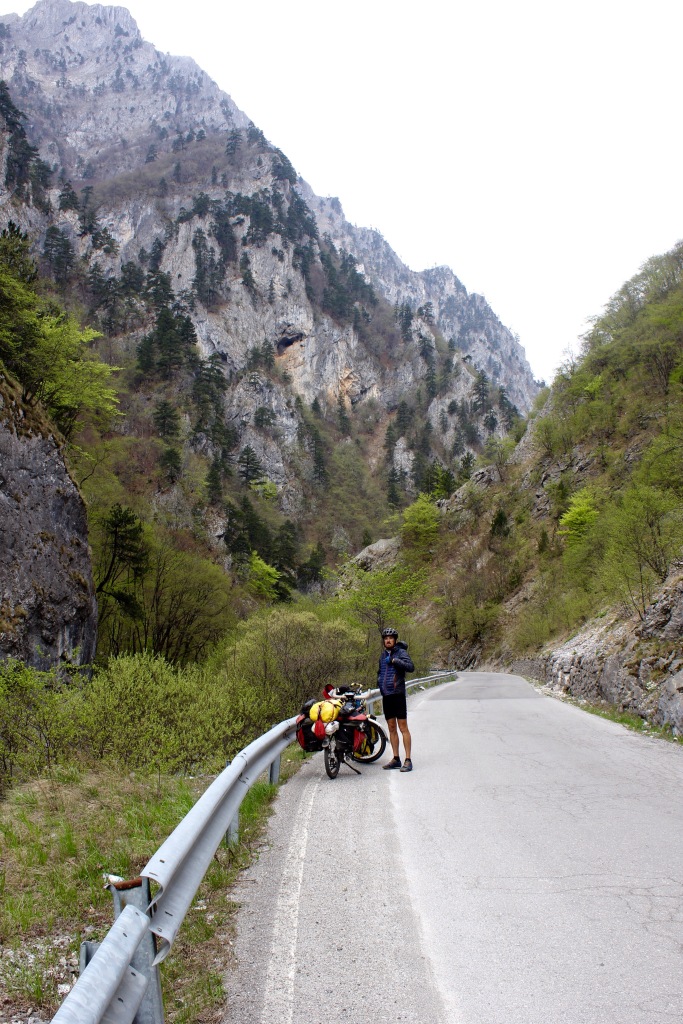 It’s not keeping to border rules we know but the promise of a secluded beautiful cycle was too strong so we decide to try. We reason that if we hadn’t stopped we would have been non the wiser… Before we leave we gain assurance from him that there will be no snow at the top of the pass on the closed road (1500m).

Ragova canyon is an impressive gorge and the road is cut right into the sheer rock face – very cool. There is very little traffic and we really enjoy the cycle. Before lunch we reach the borderline and our road turns into a bumpy track before linking to the closed (but well paved) road on the Montenegrin side. We both feel a little uneasy about entering here but having come this far we recklessly cycle up the track and cross the border line.


Here we stop to have lunch and consider our options. It wasn’t as if we were eager to cross the border illegally but any cyclist will know that turning your back on a climb which is 3/4 complete is psychological torture. While we’re weighing up the pros and cons of turning back to alternatively carrying on to find a police station in Montenegro two Kosovan border personnel appear as if by magic from the woods. They’re very friendly and explain we’ve crossed an unofficial borderline and the road is closed – all this we knew but we decided it was better to play the ignorant tourist at this point. They check our passports and inspect the bike before telling us we can keep going rather than turning back – just this once! Relieved we jump on the bike, keen to reach the top (12km away) in good time. 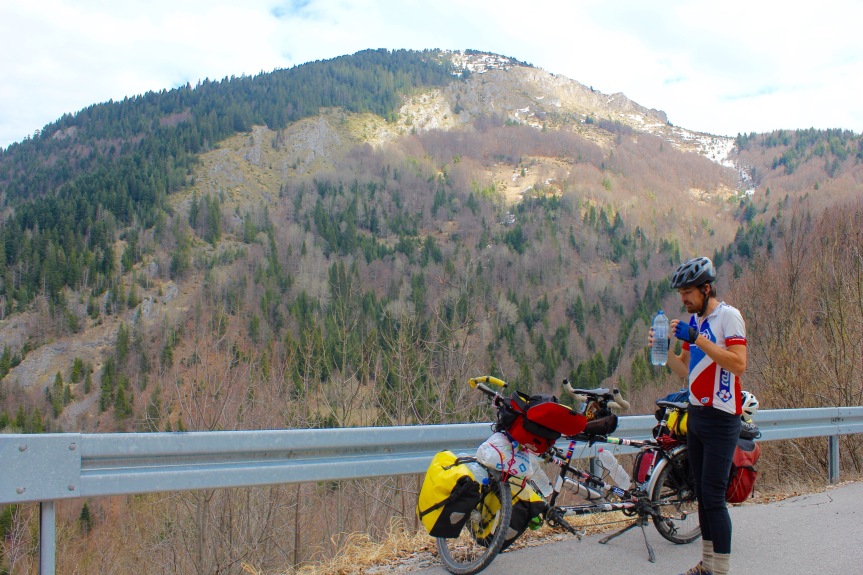 The cycle continues to be stunning and because the road is closed we’re the only people for miles… As we’re nearing the top however our earlier fears about snow creep back. If the road is closed and we’re going over 1200m, and the slope is north facing (which it was) there was probably going to be snow. Sure enough, we turn a corner and the asphalt disappears under the familiar white carpet. 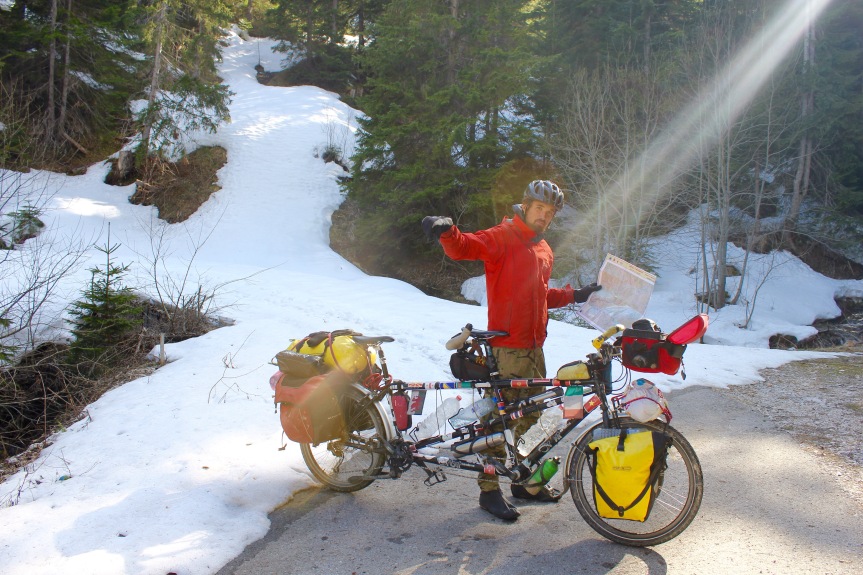 Dragging the bike through snow when it’s flat or downhill is hard enough but we had 5km of steep switchbacks before we would reach the top. Sometimes these decisions pay off and other times they don’t – admitting defeat we turn around and start the heart-wrenching decent back down. One more night in Kosovo to go then before we cross the border – this time sticking to the rules! 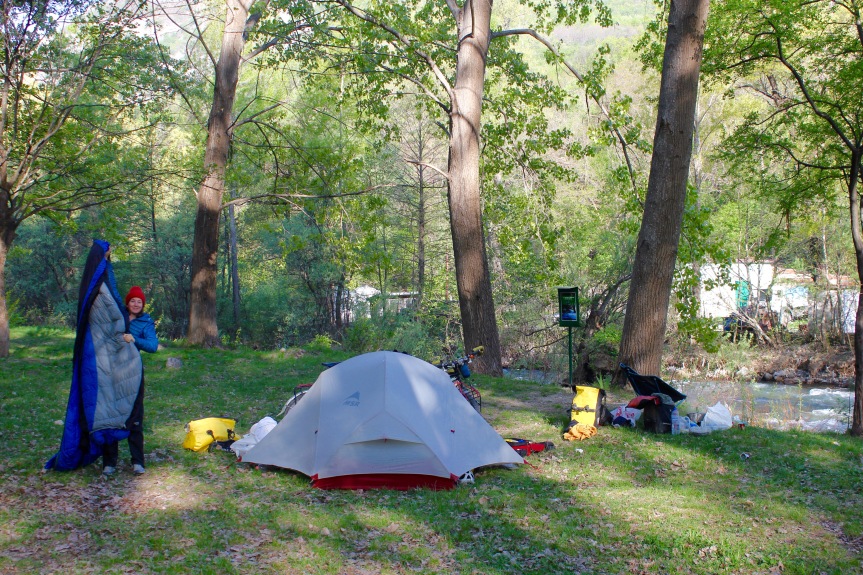