We had a good morning on the dual carriageway and managed 70km in just under three hours. After lunch this main road fed onto a smaller A road which was very pretty but busy with traffic.

Now we’re back in the countryside we cant help but notice the strange homemade mascots that Albanians like to hang near their veg patches and small fields. We can only assume that they are acting like a kind of scarecrow but we realise that most of them are surely too small to scare away birds:

We can only assume that they have some other superstitious purpose as once we start noticing them they are suddenly everywhere – even hanging from garage ceilings and incomplete building projects.

After being on the busy A road which was stressful for Paddy but at least the drivers gave us plenty of room and there wasn’t too much frustrated overtaking, we turned off onto a more rural route. The countryside here is characterised by rolling hills and we cycle through lots of villages. It’s a Saturday so there are lots of people out and about, tending their gardens and walking to the local shop.

It feels much poorer here than on the coast and we see a lot of donkeys and horse and carts being used. People harvesting using scythes and a lot of the houses have a home built feel. Lots of people grow their own vegetables and keep chickens etc. However we do see a number of very nice looking new houses too so some people out here are obviously doing well.

We know we’re getting close to Belsh when we start to cycle past lake after lake. The area here is home to 84 lakes in total – all natural. Belsh itself is an incredibly picturesque town which sits right on the end of one of these lakes. As we cycle down into the centre we notice a huge regeneration project taking place – the whole waterfront is enjoying a huge makeover with polished white stone plazas and piers being laid down right round the water.

We stop in town and start looking for a restaurant. Paddy wonders into a bar to get directions and here he meets Endri, a local 27 year old who currently works for the tourism department of Belsh and who has perfect English. Endri ends up taking us to his cousin’s restaurant which boasts great views over the town and good food. Endri is quite the character and starts telling us all about the regeneration project happening in Belsh. We’re very happy to sit, eat and listen.

‘Belsh used to be a quiet town you know, nobody knew about it but then a few years ago the government noticed it – like an unpolished gem you know – and now they are investing millions of pounds into this building project. It will be good when it’s finished I think’

After we’ve finished eating Endri insists that we come and stay with him at his families home that night. A quick call home to his mum confirms that a bed will be ready for us when we get there. We don’t know what to say at this unquestionable hospitality from a woman who hasn’t even met us yet…

We have a super evening with Endri, his mum, dad, sister and two nieces. They have a lovely house which has been extended upwards to create a brand new apartment for Endri and his new wife who he will marry in the summer.

We have a great evening with his family drinking homemade Raki. The generosity we received was overwhelming especially when we were presented with gifts from the family’s little jewellery shop at the end of the night and Endri’s dad drew a picture for us with his contact details on.

We enjoy a vast breakfast the next morning of brac (Albanian pastries) pasta, eggs, sheep cheese and salad washed down with fresh milk mixed with honey. Then we head out with Endri for a Sunday morning coffee.
Like many of the other countries we have visited on this trip society still feels very patriarchal in Albania and the next morning Endri confirms this over coffee by telling us that men dominate society here. For example Endri who is younger than his sister was sent to a private school in Terana but his sister attended the local state school. Endri confirms this over coffee; ‘That’s just the way things are here‘.

We also talk a lot about how the fabric of society is also based on connections and relationships. If people don’t emigrate they normally stay very close to where they were born and you will often find generations of families under one roof. Everybody knows everyone else in Belsh and Endri explains the importance of paying respect to your friends and allies. He alludes to the fact that you get ahead by calling favours when you need to.

What we get most from Endri is that he is very proud of Albania and when talking about Albania’s neighbouring countries you feel the underlying rivalries that still exist between the various Balkan states. The Albanian-Serbia Euro football match of last year is a good example of this.

It was so amazing to have such a personal insight into a country. Endri’s family were so warm and we will now be leaving Albania understanding the country so much better. 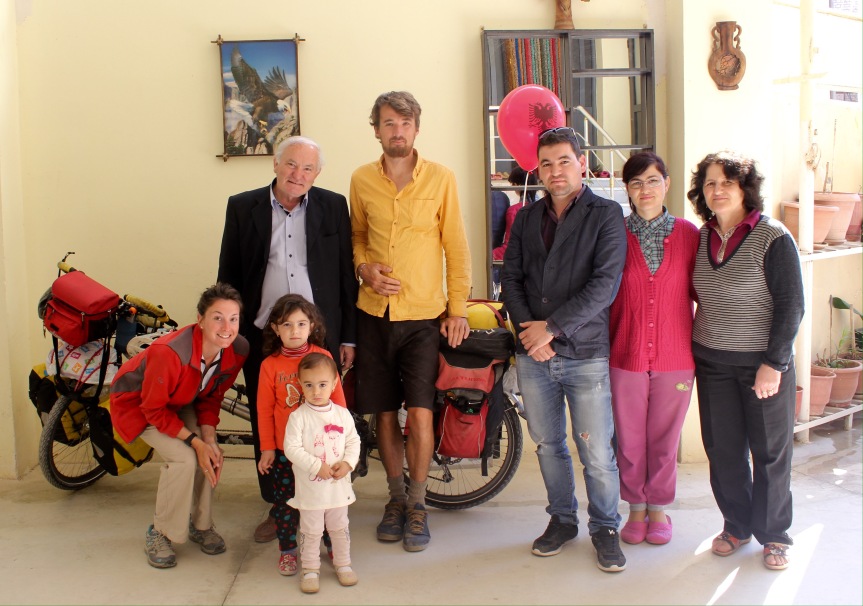