From Eptalafos we enjoyed a long downhill to Lamia. Central Greece is essentially made up of mountain ranges with rich fertile plains nuzzled in the middle. These are heavily farmed with wheat, vines, fruit trees and vegetables and we’ve also seen a lot of cotton plants. The farmers are all out busy ploughing. 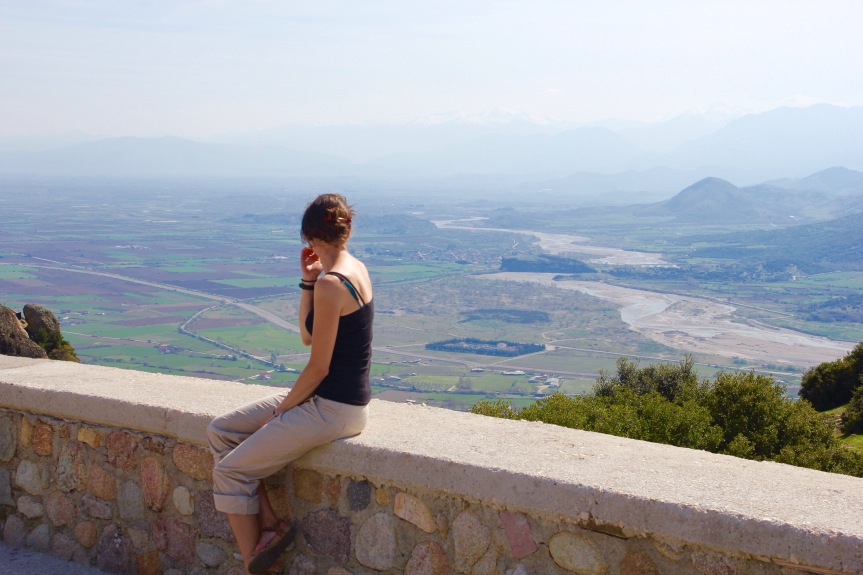 We were due for a re-stock, it’s amazing how much food we eat… – and we already had the Lidl in Lamia marked on the map. In fact, our OSM map is able to mark all the Lidls in Greece and so we have, quite literally, been making out way across the country Lidl by Lidl… (Paddy’s pun, not mine!)

It’s not just that the they are far cheaper than any other shop, there are certain commodities which are far superior in quality which we have become accustomed to. Mainly Crownsfield muesli which is 50% fruit, nut and seed = divine. The days of salty oat flakes cooked with filtered river water are certainly behind us… For now at least anyway…

It seems we’ve left winter behind us and everyday now is warm, sunny and dry and the days are getting longer and longer. We’ve seen lots of people out foraging – they seem to be picking a mixture of green leaves, and wild herbs a few of which I recognise… The spring flowers and tree blossoms are fully out now and one evening we enjoyed camping in this lovely olive tree grove.

We have enjoyed the mountain roads and passing through the small hamlets snuggled into the side of the valley – their terracotta tiled roofs, tidy veg patches and packed dirt tracks leading to remote farms all give a sense of calm, bucolic tranquility. There has been some big investment in both wind and solar energy which is great to see.

We’ve spotted lots of familiar wildlife with many different birds of prey, lizards, tortoises, badgers (!?) and many songbirds. We also have to keep swerving to avoid the long lines of caterpillars who seem intent on crossing the busy roads. We were confused by a very loud and bizzare gurgling cry for a few days until we realised it was being made by the mating toads who inhabit the roadside irrigation banks. They are really loud!!!

The only other thing of interest was the British Military cemetery which we passed. A lovely, well kept garden with snow-capped mount Pernassos in the background with around 200 graves, all dated between October 1918 and Jan 1919. I guess British soldiers who died helping Greece agains the Turkish invasion…

The Greek people are really friendly and we’ve had some nice encounters including being given a carton of fresh orange juice from a cafe waitress and being invited in for coffee and breakfast by a round faced lady and her children. We’re making steady progress and are heading towards Kalabaka where there’s some interesting monasteries to visit.