After Andy and Clare left we were back to just the two of us again. The weather turned and got worse and worse over the next few days. Howling northerly gales, cold temperatures and a good amount of rain. Fortunately we had got the eberspacher heating system working on the boat which kept things bearable but we kept thinking of Andy and Clare cycling and camping and hoped that the weather further west wasn’t so biting.

We had a number of jobs to do on the boat before Kate and George arrived on Saturday. The main ones being bailing out the rest of the water from the bilge compartments and fixing the hole where the water was coming in due to a loose pipe connection to the windlass (the powerful winch which pulls up the anchor). Here is Paddy lodged into the chain locker fixing the pipe.

Paddy spent the next day re-wiring the navigation lights while me and tandem took a ride into Lavrion to source replacements for some of our waterlogged electronics. It was the first time I had ridden the bike properly from the front and I got a lot of laughs and funny looks – it occurred to us after how ironic it probably looked to see someone riding a tandem on their own on Valentines Day!!

Kate and George’s flight arrived early evening on Saturday so we decided to spend the second part of the week visiting Athens for a few days. We were both looking forward to getting back on the bike and wanted to test out our new gearing system and check things were working well. Unfortunately a boat isn’t the best storage place for a bike and so there was some maintenance jobs we had to perform on tandem before he was road worthy – mainly rust control on the chain and frame.

It’s an easy 65km cycle from Lavrion to Athens and we arrived by 2pm. It was a nice cycle through the Greek countryside and although our legs were tired by the end we haven’t lost our fitness as much as we feared. We hadn’t been able to organise a warm showers host so we booked three nights into the cheapest hostel we could find (9 euros each a night). It was a nice place and super central but we have both agreed that Athens may be our last capital city of the trip.

The afternoon was spent wondering around the streets in the sunshine and then in true tandemonium city tradition I sourced the cheapest most local indian restaurant I could find. It ended up being a really cool local place in the heart of the Pakistani quarter of the city and we ate a huge feast for a total of 14 euros!

We woke up to pure brilliant sunshine and very warm temperatures the next morning and so we set off early to explore Athen’s main tourist draw – the Acropolis – which towers over the city from one of Athens’ three hills. We first walked up the craggy outcrop called the Aeropagus whch sits directly beneath and boast spectacular panoramic views across the city. The judicial Aeropagus council used to sit here to decided cases of murder and arson. 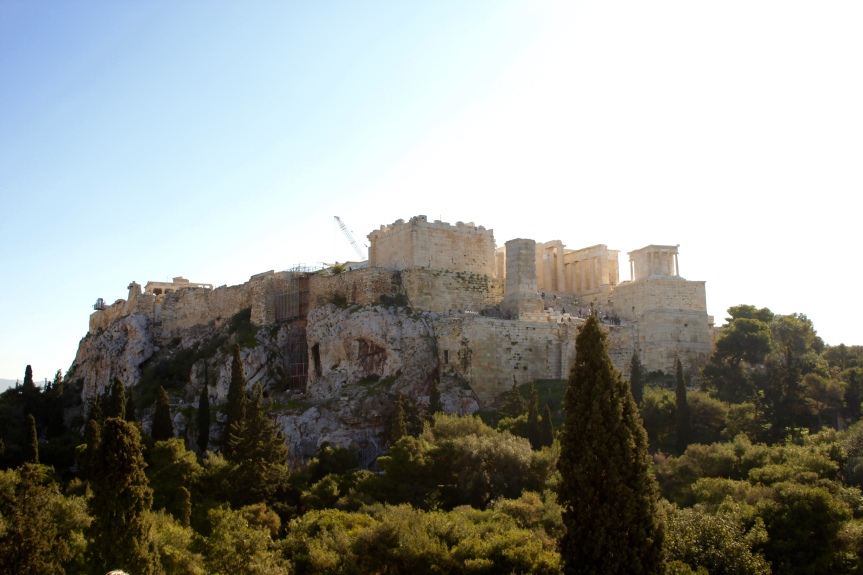 February is clearly a great time to visit the city – not too crowded and not to hot for walking around the site which in summer must be scorching and incredibly crowded. The first thing we get to is the Odeion of Herodes, one of the later additions to the site (160 AD) and built as a musical and theatrical venue. It’s a beautiful structure 76m across and has a capacity of 6,000 spectators. When built it would have had a beautiful roof of cedar. It’s been renovated over the years and is still used for musical performances today.

Next we ascend the hill to walk through the grand entrance or Propylaia, and pass the small temple dedicated to Athena Hygieia (Health), and the first of many temples which are dedicated to versions of Athena. Here we enjoyed great views all the way out to the coast and marvel at how the citizens of Athens would probably have been able to watch the victorious sea battle of Salamis against Xerses’ Persian fleet unfold from where we stood.

After stopping at a few other buildings we reach the Parthenon – the shining star of the Acropolis and the most important building in the sanctury. It was built during the re-establishment of the site following the invasion of the Persians in 480 BC and is dedicated to Athena Parthenos (Virgin), has a height of 15m, and although they are still in the process of restoring her you get a sense of how incredible the building was.

We made a quick visit to the Olive Tree which sits at one of the oldest sacred spots of the Athenians and marks where Athena and Poseidon fought for the patronage of the city. The tree, the story goes, sprung from the ground when the goddess struck the rock with her spear thus giving her the victory.

We wondered down through the Sanctury of Dionysos before wondering out to find a souvlaki which we sat on a sunny wall to eat. The afternoon was spent lounging in the rocky gardens under the Acropolis in the sun before heading back to the hostel to make fajitas and spend some time chatting to some other travellers.

Saturday was another beautiful day so we again headed out early to stroll around the Agora – the sprawling site of temples, stoas, government buildings, gardens and avenues which was the central hub of Classical Athens and where democracy was born.

There was an excellent little museum which showed amongst other things, the clay cylanders used by Athenians to cast their votes in elections, an amazing jury service upright tablet which was designed to randomly select who was to be part of the jury that day, and a Sparta shield which Paddy asked me to stand next to so you can appreciate it’s size. It’s been really great learning about the chronology of histroical events of Greece especially having cycled through both ‘Persia’ and many of the old Byzantine areas in Turkey.

On our stroll back to the hostel we were overrun by a large rowdy crowd of locals who were all dressed in different costumes, incluiding a group of traditionally dressed maidens, a bride and groom and rather randomly, three 70s hippies… This must be the start of the Greek spring Carnival called Apokries where Greeks dress up in costume, get together, drink, eat and parade through the streets. After following this parade we sit and watch the group perform a circular dance in a square before turning our backs on the festivities in search of lunch. 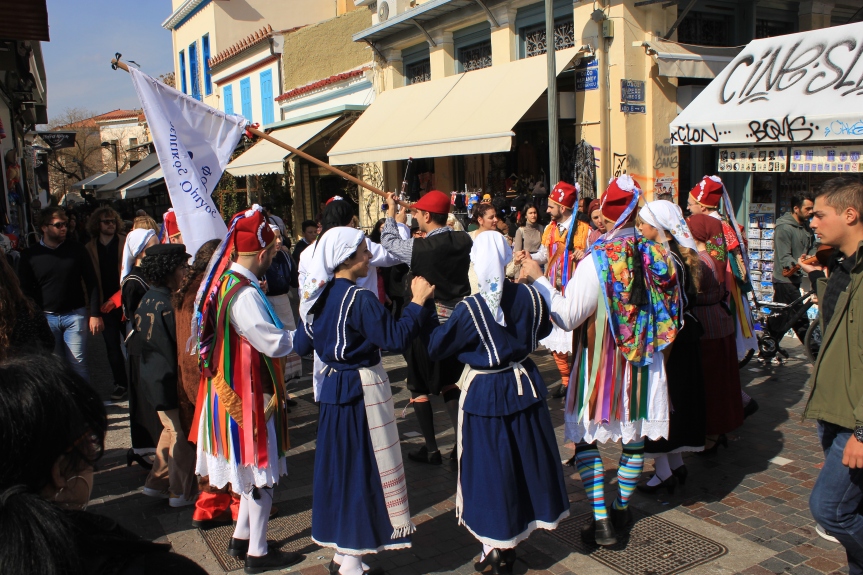 Kate and Geroge arrived that evening and we enjoyed a meal of chilli at the hostel before heading out to the streets of Athens for a few drinks. We found a great bar sprawling out onto the street with a live jazz band from America so we danced the night away drinking warm punch in the chilli night air.

Feeling a little tired the next morning Paddy and I prepared to get back on the tandem while George and Katy got ready to hit the Acropolis before finding a bus which would take them to the Lavrion and the boat. We had the whole day and with no rain forecast Paddy and I decided to cycle along the mountain road which would take us up and over the Dasos Kesarinias mountain east of the city.

This area is a favourite spot with sporty Athenians and as it was a Sunday we were accompanied by many other cyclists, mountain bikers, runners, ramblers, and motorcross riders. Once we reached the top we had a great view and we stopped for lunch overlooking the sprawling white city beneath us. We had 7km of off road after that to get us back down to a road which would take us south to Lavrion. It’s been a great few days and we really enjoyed exploring Athens. Tomorrow we set sail south-west heading to the island Aegina. It’s going to be good to have George and Kate on board as they are very experienced sailers and with Kate bringing her usual week of sunshine with her we were set to have an amazing week.

One thought on “Athens!”