If Yerevan was the only place you visited in Armenia you would find it hard to believe that 30% of the Armenian population still live in poverty.

Although the city was peaceful when we were there it has acted as the stage for a lot of recent civil unrest. Mass protests and marches broke out in the city in 2014 and 2015, demanding an end to corruption. Anger at the divide between the top 1% against the rest of the country also plays a big part in the protests as does the government’s current dependance on Russia despite the hypocrisy that Russia also sells arms to Azerbaijan. The most recent protests in July were disbanded by the government using tear gas and evidence of excessive force, journalist arrests and detention beatings have caused widespread criticism and distrust towards the police.

In retaliation a small band of armed protesters who call themselves the Daredevils of Sassoun (after the Armenian heroic epic poem of the same name) stormed a police station and took a number of hostages on 17th July. Three policemen were killed in the crossfire and the standoff lasted two weeks.

Despite the deaths, support for the Sassoun Daredevils remains strong, particularly among young activists who are disenfranchised by the governments failure to listen to their earlier peaceful protests in the summers of 2014 and 2015.

The prime minister recently stepped down paving the way for his cabinet to also disband so the deed certainly created a shock in the political system. Only time will tell to see if the current president Sarkisyan can appoint a new cabinet which can muster popular support.

On the face of it Yerevan appears to be a thriving modern metropolis which spans across a collection of green hills, the Hrazdan river running through the centre via a deep gorge.

The city has a very lively arts and culture scene and everywhere you look there are trendy shops, cafes, restaurants and basement bars. The first thing we did on arrival was to compile a list of music venues and make a visit to the opera house which sits in the centre of the city. A production of Tosca was scheduled for Saturday evening and thanks to the low price of the tickets we were able to get top stall seats for only £16 each.


We were both looking forward to spending some time in a city. Our couch surfing host fell through but we managed to find a hostel where we could cook cheap dinners and meet other travellers. We spent two really nice evenings with Jelena who was from Serbia but now lives in Moscow.

We also visited the Cascade, a very cool 1980s building which acts both as a public outdoor garden and an interior art exhibition space. Its built into the bank of one of the city’s hills creating a giant stairway on the exterior and collection of art galleries within. It’s possible to climb up the full length of the front of the building via its many white, stone steps and pleasant sculpture courtyards provide nice places to catch your breath and enjoy the views across the city. Alternatively you can take the 8 floor escalator inside.

We also visited the museum of the Armenian surrealist film maker Sergei Parajanov who’s unusual cinematography and controversial lifestyle meant he was arrested and imprisoned by the Soviet authorities. He spent nearly five years in a work camp in the late 1970s. Later he moved and later died in Yerevan.

The highlight and most poignant visit was our afternoon in the Armenian genocide museum. Ancient Armenia was once much bigger than the current Armenian region and by the 1600s a large section of western Armenia had come under Ottoman rule. The large Armenian population living in these provinces have a very sad and long history of suffering which climaxed in 1.5 million Christian Armenians being systematically killed between 1910-23.

The genocide officially started in the early 20th century, (1915) with the round up of many prominent Armenian intellectuals. Later it moved onto the slaughter and forced army conscripts of all able bodied men and ended with the mass deportation and murder of hundreds of thousands of women and children. Many other children were taken away from their families and converted to Islam. To date only 29 countries have officially recognised the mass killings as genocide and Turkey continues to deny the word genocide as an accurate term. The museum is excellent but harrowing.

We also visited the state museum which had a brilliant exhibition documenting Armenian history from as early as 4500BC through the Middle Bronze period, Uratrian kingdom, Persian and Roman conquests all the way up to 400 AD when the region adopted Christianity.

After these culturally gluttonous days it was time to head over into Georgia. We would really have liked to cycled the full length of Armenia but the weather promised more rain and cold temperatures and in the end we decided to take a shared taxi across the border. It’s gloomy taking public transport when you have time to cycle instead but we definitely made the right decision. As soon as we left the city the rain we had had in the centre soon turned to thick snow and as we drove over the mountains towards the border via Lake Sevan the road got very very treacherous and there was a lot of waiting for trucks stuck in the drifts. 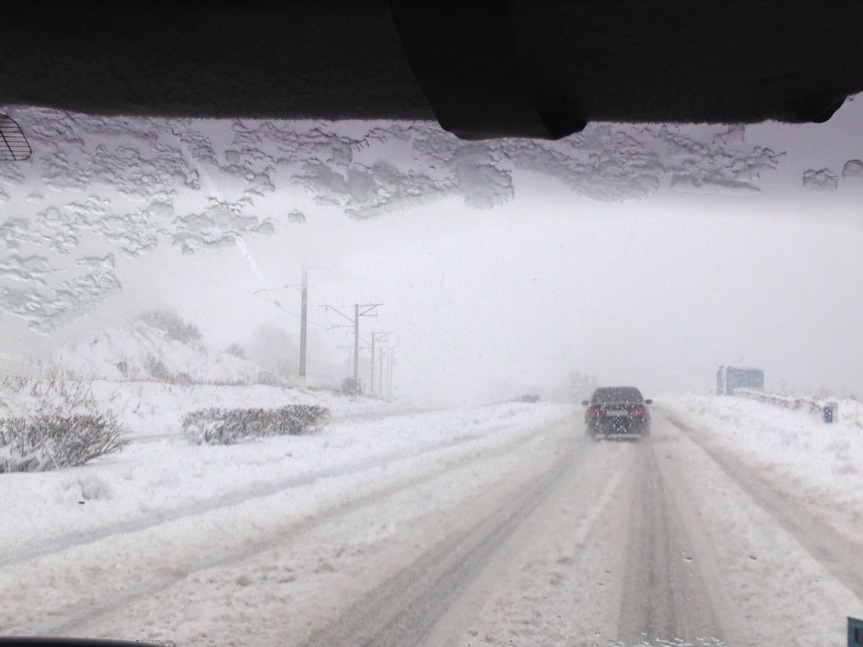 Very suddenly we were leaving Armenia and crossing into Georgia, heading to the capital Tbilisi. And so concluded our trip through country number 11!