We both enjoyed our rest in Goris. We found a cheapish hotel where we were the only guests and so we spent two cosy evenings cooking beef stew, playing backgammon and watching films in the living room.

The snow which had fallen the first night gave the town a distinctly Christmassy feel to it and we both felt pretty festive while walking around the local food shops and markets.

Surrounding Goris are some pretty cool pyramid shaped volcanic rocks which have been home to troglodyte dwellings and shelters for centuries. Fortunately the rain and snow abated enough the second afternoon for us to venture out and so we headed to the cemetery which sits amongst these strange cone shaped formations.

Goris old town has that feeling of a once affluent regional centre now gone slightly to seed. There are some beautiful old stone buildings adorned with wooden balconies but the majority of them are now pretty dilapidated and sorry looking.  Still it was nice to get out and about and meet some of the townspeople.

The next day we got ready to cycle northwards again. We were aiming for Zorats Karer, a pre-historic Bronze Age stone circle site. It was VERY foggy and we had to strap the torch light to the back of my helmet so cars could see us better.

﻿We climbed for a good few hours and then dropped down to the archaeological site where fortunately the weather was much clearer and warmer. It was nice exploring the site which is made up of 223 Menhirs (standing stones) with an excavated tomb in the middle.

The next day we had more climbing to do. The day was characterised by heavy mist and bleak landscapes. The view got slightly better when we reached the Spandarian reservoir where we managed to get half an hour of ‘sunshine’ during lunch. Luckily we were able to dry out the tent and take shelter behind a hill from the wind. We reached the top at around 4:15pm and just as reached the summit two cycle tourers came up the hill from the other direction. Good timing. We didn’t stay long to chat because it was freezing but we were very cheered by the news that it was blue skies and late afternoon sunshine on the other side of the mountain. From here we had a big drop down towards warmer weather! Hurray!

We dropped down a good 15km enjoying the views and sunshine and then pulled tandem off the road down to a great riverside camping spot. A tree had been recently felled so there was loads of dry wood about. Perfect!

Armenia is known for its collection of impressive churches, monasteries and cathedrals. 13th century Nora-Vank church and monastery is one of the most famous and its 120km south from Yerevan so we made it our next stop.

We enjoyed our first proper warm day with blue skies, and the last 10km up to the church were through an amazing gorge and although it was a really hard 2hour climb we both enjoyed the scenery and the sunshine.

On the way up we were passed out by two wedding convoys who beeped and waved from their cars. Many of the vehicles had dead animal skins stuck to the bonnet and a guy waved a dead chicken from his car window as he passed. After reading up, we assumed that they were on their way to perform a Madagh blessing ceremony in front of the church; a chicken or other animal is slaughtered before eating it as part of a ceremonial feast. The practice is widespread in Armenia and is a tradition taken  from their pagan past rather than Christianity.

At the bottom of the church, which is perched on a high cliff surrounded by red brick cliffs, is a great wooded picnic area so we set up camp there with a plan to visit the complex the next morning. Naturally we had another camp fire! 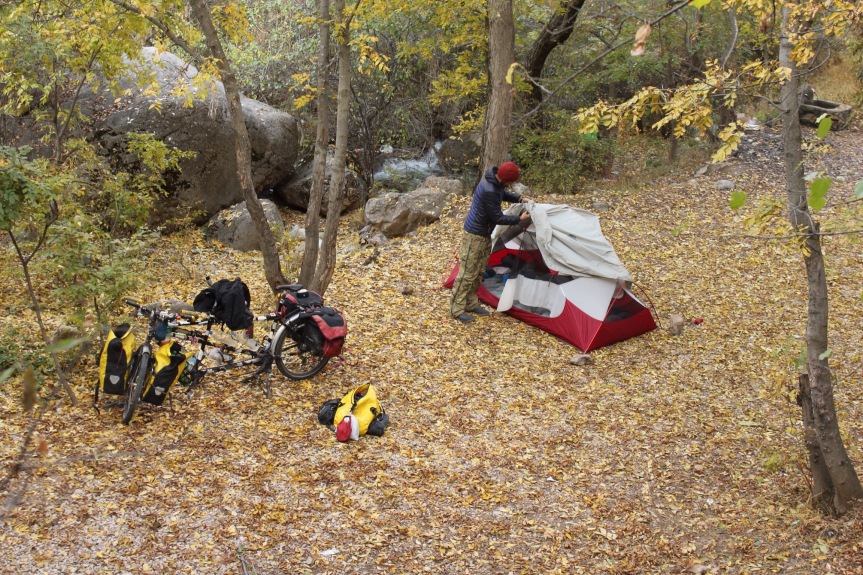 The next morning after an epic breakfast which Chaz Meades would have been proud of 😉 we cycled the bike up to the monastery.