Our plan was to only stay in Zhen’an one night and continue on our way down towards the Nu Jiang River. That was until we met Huang Wen Sheng (translating to: yellow, culture, strong) and got invited to spend the weekend with him and his extended family.

We met Huang after attempting to get a Chinese SIM card in the local phone shop. The woman who owned the shop couldn’t speak any English so she phoned her little brother – Huang – and he very kindly came over to help us.

Huang’s English is very very good and after an hour of chatting and sharing tea and beers he told us he would like to invite us to stay with him in his house and to meet his family.

They were spending the weekend altogether along with friends in a kind of special memorial commemoration to the family’s relatives who were no longer with them on earth. There would be lots of eating and drinking and a visit to the family grave up on the mountain.

We were touched by Huang’s offer and keen to meet his friends and family and gain an insight into Chinese family life. We promised to be at his house for 8.30am the next morning.

Huang grew up in Zhen’an but studied computing in Kunming where he met his lovely wife who is originally from a town near Beijing. After they got married and had their first daughter the couple moved back to Zhen’an where Huang built a house for his new family and his parents. They have all lived together in this new house for about ten months.

Huang told us that he always loved English in school but we were the first foreigners he’d ever seen in Zhen’an and that he was very glad to practise the language again.

Not long after we had arrived, more of Huang’s extended family and friends arrive too (most of them live in Zhen’an too).

We all eat breakfast together (about 25 of us). Served up is a custard like soup called Dou Fen which is made from a kind of pea.

This is mixed with rice noodles and a number of different condiments which the eater adds themselves according to their taste – chilli, a delicious peanut and sesame seed mix, dill, spring onion and salt.

After breakfast a party of us jump in the car and drive up the mountain overlooking the town. We park and then walk 7mins through the woods up to the family grave. 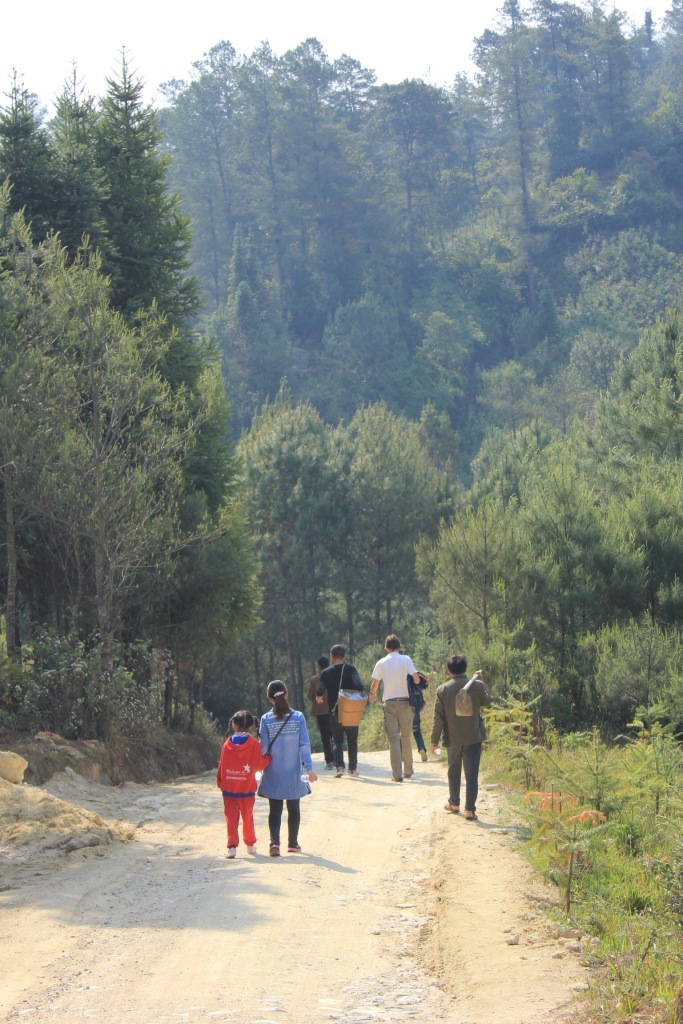 The views are beautiful and over the valley we can see other graves peppering the mountain side.

The family grave is quite a big one, a large stone tomb made of grey stone, decorated with carvings of scenes from old Chinese fables and the 12 animals of the different Chinese new year. Birds, dragons, horses and a large yinyang symbol decorate the front.

We clear the encroaching weeds and long grass from the tomb and then each family member lights some incense and kowtows to the grave. We also light a small fire to offer our thanks to the mountain spirit who looks after the area. Huang explains that this commemoration takes place every year. Every Chinese family will choose a weekend to hold their commemoration within a 20 day period in April. We were very lucky that Huang’s family had chosen to hold theirs the weekend we were passing through Zhen’an.

After this ritual we make our way back to the house. Friendship and family ties are obviously very strong. Everyone lives close by so it’s easy to get together for special occasions like this. Huang has a strong network around him and we instantly feel part of this network. Everyone is so welcoming and the children are encouraged to call us aunty and uncle right from the first meeting.

Huang explains that life is very much centred around the family. He shows us the red plaques on his lounge wall which detail his complex ancestry.

Lunch is served and the custard Dou Fen has set into a solid jelly like block. It gets cut up into chunks and mixed with chilly and peanut oil in a bowl. Some people simply hack a big chunk off and plonk the sauce on top. Dou Fen is really popular in Yunnan, it’s like the staple food here.

After lunch the cooking activity continues as dinner is prepared in the big covered courtyard. Huang and his friends invite us to sit down to a drinking card game and the beers are brought out. I’m allowed to take it slow but Paddy has to put his best Irish drinking hat on.

A delicious bowl of homemade sausage and cured ham is presented. It goes very well with the beer. We finish one game and then the rice wine comes out…
A constant stream of snacks is brought to the table. 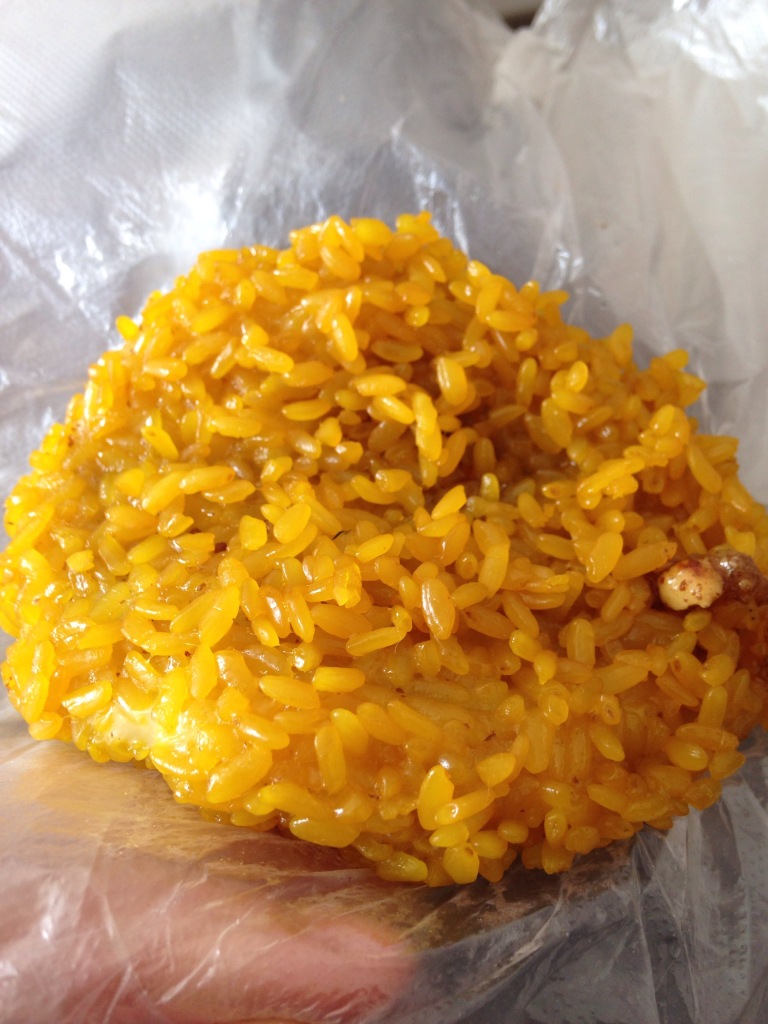 We relax on the big sofas for a while after the card games and the atmosphere reminds me of Christmas Day back home!

Huang’s niece teaches me some Chinese words while Paddy attempts to call a travel agent in Iran.

At around 5pm dinner is ready and it really is a FEAST. 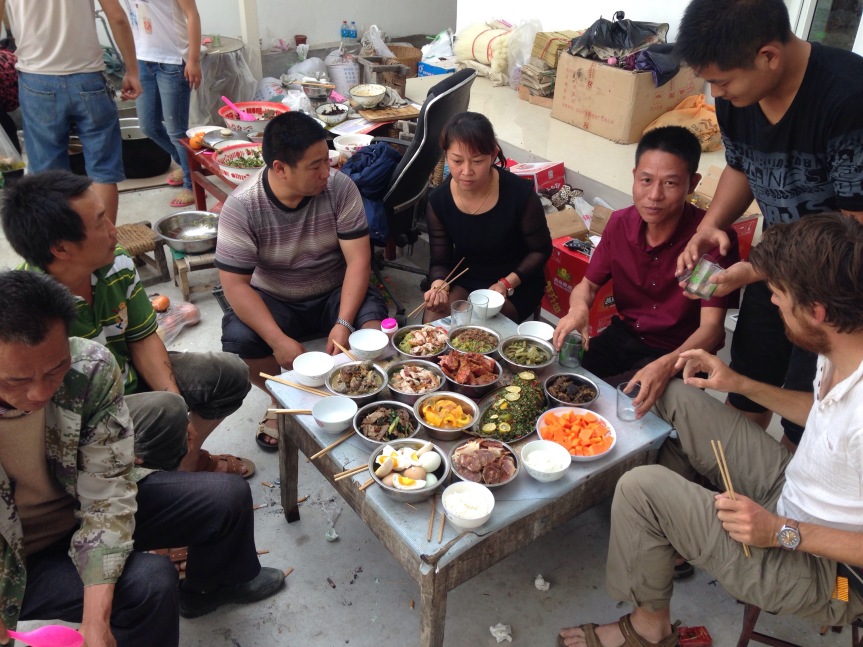 There are so many dishes; whole fish, duck, chicken and pork as well as an array of delicious vegetable and lots of differently preserved eggs. The group sit around 4 tables all of which are covered with dishes. The food is amazing!!

Over dinner we ask about Chinese society and what it’s like to be starting a family in the China of today. Huang talks about the how there can be huge pressure on you to be wealthy. Wealth gains status in your community. ‘Without wealth you have no respect and no voice’ he explains.

After dinner, we take some photos together: 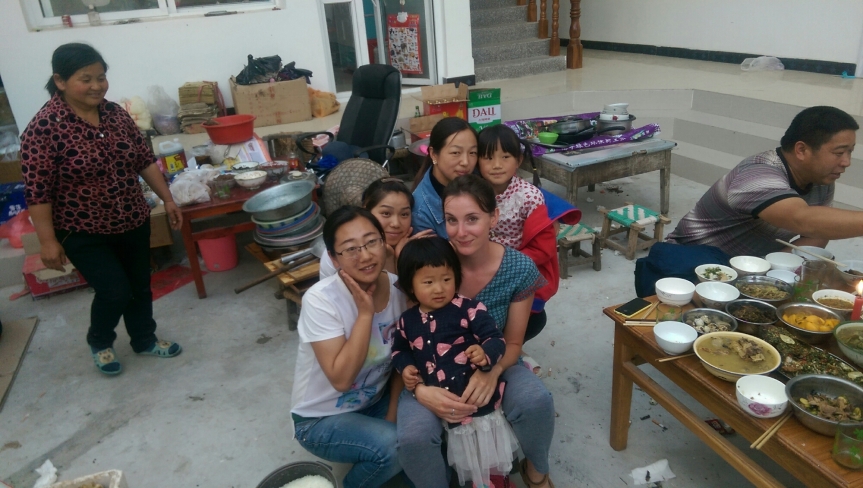 To round off the day, Huang tells us that he’d like to take us to a special monument which stands on a mountain about 20 minutes from Zhen’an. The mountain was the staging area for a large scale battle against the Japanese who invaded China during the Second World War.

The drive up has scenery which is just incredible! Huang tells us that the monument was completed 18 months ago and that the road has been specially built by the government so that locals and tourists can visit the site. Chinese sentiment is less than favourable to the Japanese and it is obviously important for people to understand what it cost China to win the war.

We arrive at dusk and are blown away by the monument which consists of thousands of individually carved stone statues, all dressed in army uniform.

It is an amazing place, the faces of the statues are so real and are apparently based on real men who died in battle at the site. 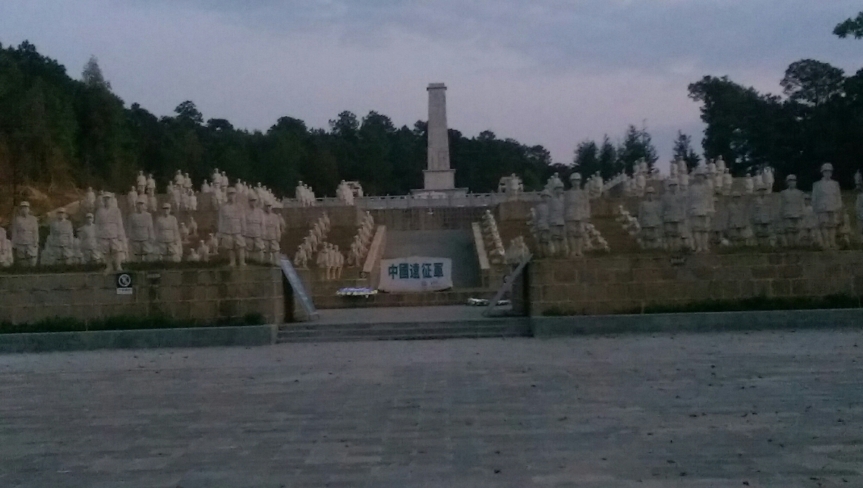 The night is nicely rounded up with a classic spicy chicken foot – a delicacy here! I cause a slight panic when I get a very painful piece of chilli stuck behind my contact lens after rubbing my eye!

The next morning we are all invited over to Huang’s brothers house for breakfast and dinner. When we arrive duck, rabbit and chicken (all of which had been freshly killed that morning) dishes are being prepared. Huang’s brother oversees the cooking while we play more card games although we don’t really drink as we need to cycle 40km after lunch.

Needless to say the lunch was delicious if not a bit rushed as we needed to get going. We swap contact details, take some final photos and say our goodbyes.

We never got our SIM card, but that hardly mattered after such a great weekend with such friendly people

4 thoughts on “An Insight into Chinese Family Life”